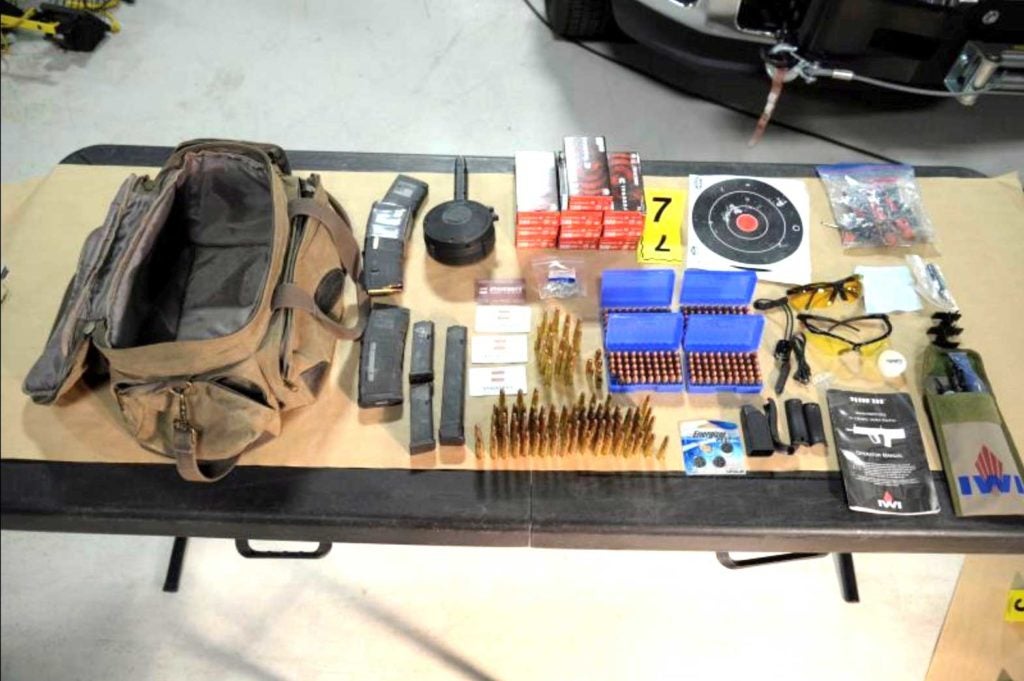 View of ammunition, magazines and accessories in possession by Cleveland Grover Meredith Jr after law enforcement searched his hotel room on January 7 after the U.S. Capitol storming in Washington, U.S. in this handout obtained by Reuters January 14, 2021. U.S. DOJ Attorney’s Office/Handout via REUTERS

WASHINGTON – United by political grievances, they came in costumes, snapping selfies, calling themselves patriots. Some came armed for battle and planning for “war.”

As authorities begin to charge the rioters in the Jan. 6 siege of the U.S. Capitol, court documents paint a picture of a diverse mob that included both citizens with mainstream careers – police officers, a flower shop owner, a state lawmaker, military veterans, even an Olympic medalist – as well as Americans on the fringe. One was a member of the Proud Boys, a far-right extremist group. Another had a caveman costume beneath a police bulletproof vest. One served time in prison for attempted murder.

They traveled from as far as Hawaii to join the protest of Congress certifying Democrat Joe Biden’s election win, which Republican President Donald Trump has falsely claimed resulted from widespread election fraud. Some brought all manner of weapons or explosives, underscoring the grave threat from an insurrection that resulted in five deaths, including a police officer, and dozens of injuries.

Federal prosecutors have said they expect to bring charges against hundreds of people involving the riot and related threats and violence. They had charged about 80 as of Thursday, a Justice Department spokeswoman said. Their task was made much harder by that fact that overwhelmed police initially made few arrests of the hundreds of people who stormed the building – just 14 were detained that day by the U.S. Capitol Police, which guards the building. And yet many suspects made investigators’ and prosecutors’ jobs easy by mugging for news cameras and posting what authorities described as real-time confessions – including videos of themselves – in postings on social media as they pushed their way inside the Capitol, home to the U.S. Congress, according to a Reuters review of court records.

David Blair – a Trump supporter who lives in Washington’s suburbs and was charged with attacking a police officer with a stick – came to the Capitol after seeing that it had been overrun by a mob supporting the president because he wanted “to witness history,” he told Reuters in a text message. “I ended up still finding a way to get in trouble because I had so much pent-up emotion,” he wrote.

The initial round of charges do not reflect the full gravity of the siege that paralyzed Congress as members fled for their lives and hid from the mob. Authorities expect more serious charges to follow after more intensive investigations. Washington’s acting U.S. attorney, Michael Sherwin, said Tuesday that he had assembled a team to focus on building sedition and conspiracy cases related to the most “heinous” actions during the siege. Investigators are reviewing communications, along with travel and financial records, to track any coordination or organization among the rioters.

“People are going to be shocked with some of the egregious conduct that happened in the Capitol,” Sherwin said.

Authorities have so far offered scant details about the people they charged, and some of the court filings remain sealed.

At least some of those arrested in connection with the riots have a history of mental illness. Mark Leffingwell of Seattle, who faces charges for assaulting a police officer, is an Iraq war veteran who suffers from PTSD and traumatic brain injury, his lawyer told a judge. Richard Barnett, photographed sitting in U.S. House Speaker Nancy Pelosi’s office, told the judge he has a history of depressive disorder.

Court documents did not show whether Barnett had entered a plea. Barnett’s lawyer, Anthony Siano, declined to comment beyond confirming the details of court proceedings.

Lonnie Coffman, a 70-year-old Alabama man arrested for having explosives in his truck, takes multiple drugs for mental illness, his lawyer told the judge in a hearing this week. Coffman pleaded not guilty on Tuesday. His lawyer did not respond to a request for comment.

Thomas Robertson, one of two off-duty Virginia police officers charged with entering the Capitol illegally, was more explicit, praising the power of right-wing rioters: “The right IN ONE DAY took the f—— U.S. Capitol. Keep poking us,” Robertson wrote on social media, according to the Capitol Police. He boasted that the crowd had “actually attacked the government.” Neither Robertson nor his lawyer could be reached. Court documents did not show whether he had entered a plea.

Some suspects apologized after the riot.

Blair – the man charged with attacking a police officer with a stick – told an investigator he was “being an idiot, pumped up and didn’t move back. Accept everything. I’m sorry,” according to a court filing. Blair pleaded not guilty and said in a text message he “would never, and have never had an intention of assaulting a police officer.” He did not directly answer what he did during the alleged attack and why.

Prosecutors say Cleveland Meredith, whose lives in North Carolina, according to his lawyer, loaded his truck and trailer with weapons and headed to Washington, but arrived too late to join the riot. When police searched his truck the next day, they found a high-powered rifle and thousands of rounds of ammunition, including bullets the FBI described as armor-piercing.

As Meredith traveled to Washington, someone sent him a text message that Trump supporters had breached the Capitol. “Burn DC to the FKG ground,” he replied, according to court documents. When Meredith learned that Vice President Mike Pence would count electoral votes from states Trump lost, he replied: “War time.”

FBI agents arrested him the next day in Washington after he sent more menacing texts and head-butted a person on the street, according to court records. Prosecutors urged a judge on Wednesday to keep him locked up while the charges are pending, describing Meredith as “a clearly disturbed, deranged, and dangerous individual that fantasizes about committing horrific acts of violence and takes countless steps to carry them out” and said he appeared ready to act on “extreme political and racial animus.”

Prosecutors described Meredith as an adherent of the fringe QAnon conspiracy theory, which casts Trump as a savior figure and elite Democrats as a cabal of Satanist pedophiles and cannibals. A judge on Thursday ordered Meredith detained pending trial. His lawyer did not respond to questions about the case.

Authorities arrested Coffman of Alabama near the Capitol after noticing the handle of a gun in his pickup truck while they were responding to pipe bombs left outside the headquarters of the Democratic National Committee and Republican National Committee, both of which are near the Capitol. Inside his truck, they found an AR-15-style rifle, a shotgun, a crossbow, several machetes, smoke grenades and 11 Molotov cocktails. They also found a note with the name of at least one member of Congress and a judge, alongside the notation “bad guy.”

Prosecutors said the combination of weapons and political messages “suggest that these weapons were intended to be used in an effort to violently attack our elected representatives.”

A Capitol Police agent said in a court filing that Coffman told the officers who arrested him that he tried to return to his parked truck several times during the day but couldn’t because police had blocked off the area while they investigated the pipe bombs.

Others were armed during the riot: A police officer said he noticed a bulge on the hip of Christopher Alberts – who was dressed in body armor and carrying a gas mask – as he filed out of the Capitol grounds, according to court records. When they stopped him, they found a loaded handgun. Alberts’ lawyer did not respond to questions about the case.

Two other men, Eric Munchel and Larry Brock, both were photographed inside the Capitol carrying zip ties, commonly used as a handcuff. Prosecutors have not said what either man intended to do with them. Brock is an Air Force veteran who once flew warplanes. Both were charged with being inside the Capitol illegally. Reuters was unable to reach their attorneys.

Michael Curzio, arrested at the front of a crowd inside the Capitol, had recently served a prison sentence in Florida for attempted murder. He was released in 2019. Curzio’s mother, Vicki Prentiss, told Reuters he went to Washington because “he was excited about going to support Trump.” Curzio was charged with violent entry and disorderly conduct, along with unlawful entry of the Capitol. Curzio’s case was sealed by the court and he could not be reached for comment.

Most of the cases filed against rioters so far were for less serious offenses involving being inside the Capitol illegally, and many defendants were released within a day.

An FBI agent said in an affidavit that he identified former Olympic swimmer Klete Keller – who has two gold medals and three other medals – inside the Capitol because he was tall, unmasked, and wearing an Olympic patch on the shoulder of his jacket. Reuters was unable to reach Keller, who is charged with unlawfully entering the Capitol. Court documents did not indicate a plea.

Nicholas Ochs, head of the Proud Boys’ Hawaii chapter, was charged after the FBI said he posted a picture on Twitter of himself smoking a cigarette with the caption “Hello from the Capital lol.” Ochs has not yet appeared in court, and court documents did not indicate he had made a plea. He could not be reached for comment.

Prosecutors charged Jenny Cudd, a Texas flower shop owner, on Wednesday with unlawfully entering the Capitol, citing a widely viewed social media video in which she laughed and said: “We did break down the, umm, Nancy Pelosi’s office door, and somebody stole her gavel and took a picture sitting in the chair flipping off the camera.” Reuters was unable to reach her.

Afterward, the FBI said Cudd appeared in a Facebook video in which she declared she had participated in a “new revolution” and added: “I am proud of my actions, I fucking charged the Capitol today with patriots.”

Also charged was Josiah Colt, who authorities said was photographed dropping from the Senate gallery into its floor, one of the riot’s most iconic images, citing a Facebook video that emerged shortly after. “I just got in the Capitol building. I was the first one that hopped down into the chamber,” the man the FBI identified as Colt says in the video, wearing a helmet and breathing heavily. Later he adds: “I don’t know what to do. I’m in downtown D.C. I’m all over the news.”

Colt’s lawyer did not immediately respond to a request for comment.

Derrick Evans, a newly elected state delegate from West Virginia, was charged after he posted a Facebook video of himself entering the Capitol, in which he said: “We’re in, we’re in! Derrick Evans is in the Capitol!” In a public statement on Thursday, Evans’s lawyer, John Bryan, said he “did nothing wrong” and was exercising First Amendment rights.