GOP faces rage from both pro- and anti-Trump voters 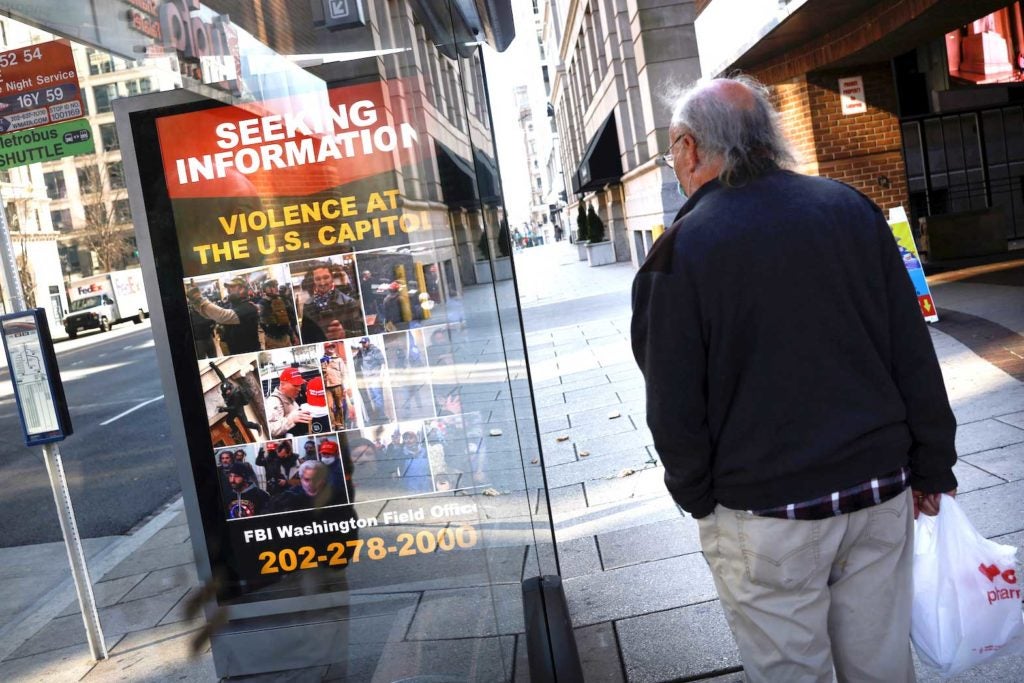 A local resident looks at a billboard with pictures of supporters of U.S. President Donald Trump wanted by the FBI who participated in storming the U.S. Capitol, forcing Congress to postpone a session certifying the results of the 2020 U.S. presidential election, in Washington, U.S., January 13, 2021. REUTERS/Carlos Barria

WASHINGTON – After riots at the U.S. Capitol by President Donald Trump’s supporters, the Republican Party is facing defections from two camps of voters it can’t afford to lose: those saying Trump and his allies went too far in contesting the election of Democrat Joe Biden – and those saying they didn’t go far enough, according to new polling and interviews with two dozen voters.

Paul Foster – a 65-year-old house painter in Ellsworth, Maine – is furious at party leaders for refusing to back the president’s claims that the election was stolen with millions of fraudulent votes. “The party is going to be totally broken” if it abandons Trump, Foster says, predicting Trump loyalists will spin off into a new third party.

Marc Cupelo – a retired business consultant in Syracuse, New York – couldn’t feel more differently. A lifelong Republican, he regretted voting for Trump as he watched the president’s backers storm the Capitol last Wednesday, inspired by Trump’s fiery rhetoric and false election-fraud claims. Now he wants the party to banish Trump and carve out a less-divisive future, free of the “twisted values” held by some of his supporters.

“I just wish he would run away with his tail between his legs,” Cupelo says.

The opposing views of Cupelo and Foster capture the crucible in which Republican leaders find themselves. With Democrat Joe Biden now set to take office on Jan. 20, the future of the Grand Old Party is wracked by uncertainty and intra-party division not seen since the aftermath of the Watergate scandal that drove President Richard Nixon from the White House nearly a half century ago. And the choice confronting party leaders as they ponder a renewed impeachment effort – whether to continue backing Trump or make him a pariah – will almost certainly cost the party voters it needs to win future elections, Republican party officials and strategists say.

Though Republicans have now lost control of the White House and both houses of Congress in just four years, Trump’s base remains a potent electoral force in the party. That base helped him capture more voters – some 74 million – than any Republican in history. The vast majority of his supporters, including 70% of Republicans, remain loyal, according to new Reuters/Ipsos polling conducted days after last week’s riot at the Capitol, and many activists say they’re willing to abandon the GOP for any perceived slight against their leader.

Yet Trump’s ability to attract support is surpassed only by his ability to drive it away: Biden won more voters than any presidential candidate in history, capturing more than 81 million votes, including the bulk of self-described independents and a small but significant number of disaffected Republicans, according to exit polls by Edison Research. Many of those voters – and more repelled by the Capitol violence – are adamant that they will never support a party that remains tethered to Trump.

The dilemma revolves around a central question, says longtime Republican strategist Matt Mackowiak: “We can’t win without Trump’s base; the question is, can we hold onto Trump’s base without Trump?”

The loss of support – from both Republicans who love Trump and those who hate him – represents a crisis for a party already struggling to cobble together a winning national coalition. Republican presidential candidates have won the popular vote just once – in 2004 – over the last 30 years. The party remains heavily dependent on its structural advantages in the U.S. electoral college system, which helped Trump win in 2016 – despite losing the popular vote by 3 million. It also largely depends on white voters in a nation that is experiencing rapid racial diversification. (For a graphic explaining the electoral college system, click https://tmsnrt.rs/3lUKcgv )

Now, support among Republicans appears to be eroding, and the trend has accelerated since last week’s riot at the Capitol and amid a new impeachment effort – the second of his term – accusing him of inciting the mob violence. The House of Representatives voted Wednesday to impeach Trump, setting the stage for a trial in the Senate, possibly after he leaves office. If he were convicted, even after stepping down, it’s possible senators could vote to bar him for life from holding federal office.

Trump’s support among self-identified Republicans fell to 70% in the new Reuters/Ipsos polling, conducted Jan. 8-12 in the wake of the Capitol riot, down from a peak of 88% in mid-August. That is the lowest level of his presidency. His approval also sank to just 34% among all Americans, the lowest since December 2017, after he signaled support for far-right extremists at a deadly rally in Virginia. (For a graphic of poll results, click https://tmsnrt.rs/3oJ8N9R )

The Capitol riot was the last straw for Jack Drago, 80, a retired service engineer for Chrysler who lives in Virginia’s Shenandoah Valley.

Drago voted for Trump because he disliked Biden’s support of abortion rights and worried that the Democratic Party’s progressive wing would push the country towards big-government “socialism.” But he’s been “appalled” by Trump’s conduct and polarizing language since the election and holds him responsible for the Capitol attack, referring to the Trump backers who carried it out as “clowns” and “radicals.”

“If the Republicans said to Trump: ‘We’ll impeach you,’ they’d hit a home run,” Drago says.

Ten Republicans in the House of Representatives voted to impeach Trump on Wednesday.

For now, however, Republican voters like Drago remain more the exception than the rule.

In the days before the Capitol riot, Reuters/Ipsos polling showed that Trump’s repeated assertions of election fraud were catching on: About 65% of Republicans felt Biden’s election victory was due to illegal votes and election-rigging. That was up from 59% who said so in a Nov. 13-17 poll shortly after the election.

The continued backing of Trump’s base has not deterred a growing number of GOP leaders from seeking his ouster, however, either by impeachment or an effort under the U.S. Constitution’s 25th Amendment provisions for removing a president based on inability to perform the duties of the office. Some, such as Wyoming Rep. Liz Cheney – the third-ranking Republican in the House and daughter of former Republican Vice President Dick Cheney – cast the decision as a duty to put country over party.

“The president of the United States summoned this mob, assembled the mob, and lit the flame of this attack,” Cheney said. “Everything that followed was his doing.”

But that argument could spur many of Trump’s faithful supporters to seek retribution.

David Wallace, a 66-year-old retired oil industry sales manager from West Chester, Pennsylvania, called Republicans who blocked investigation of Trump’s fraud claims “spineless bastards” who are abandoning their president and his tens of millions of supporters over the actions of a “couple hundred people at the Capitol.”

Wallace says he’d love to see Trump backers split from the GOP to form an alternative party, but considers that unlikely. Instead, he hopes the president will create his own internet platform – a way to circumvent Facebook, Twitter and other social media companies that have restricted the president’s accounts – and use that pulpit to campaign for candidates who back Trump’s agenda.

“I would put money into that,” he says.

Some Trump backers remain loyal despite paying a high personal price for joining the assault on the Capitol. One of them is Jake Chansley, also known as Jake Angeli or, more colorfully, the “QAnon Shaman.” He was photographed inside the U.S. Capitol building on Wednesday posing in front of the Senate dais and striding through the halls in a horned, fur headdress. He has been charged with violating federal laws against unlawfully entering restricted buildings and disrupting government business.

Chansley remained in jail in Phoenix, Arizona on Wednesday, awaiting a Friday hearing, and could not be reached for comment. His lawyer, Gerald Williams, a federal public defender in Phoenix, did not immediately respond to messages seeking comment Wednesday evening.

Chansley’s mother, Martha Chansley, told Reuters she is proud of her son for standing up for his beliefs, including his adherence to the debunked QAnon conspiracy, which claims Trump is fighting a “deep state” Democratic cabal of Satan-worshipping pedophiles and cannibals.

“He was just going down there to be a part of the support for our republic, our president. That was the sole intention,” she said.

Trump has at times been defiant amid the blowback from the Capitol riot. But he has also sought to distance himself from the violence – while embracing the backing of the supporters who perpetrated it. On the day of the riots, Trump implored his supporters to go home in a video, but also lavished praise: “We love you. You’re very special.” On Wednesday, he urged calm at any further demonstrations, saying he wanted “NO violence, NO lawbreaking and NO vandalism.”

While some prominent right-wing activists have criticized the president for turning his back on his most fervent supporters when he denounced the violence at the Capitol, many believe his loyalists will remain steadfast.

“The president defeated the Republican establishment in 2016 – the Republican Party, in terms of the voters, the movement, is very representative of the president’s agenda,” says Boris Epshteyn, a strategic advisor to Trump. Epshteyn notes that Trump got 63 million votes in 2016, but over 74 million in November, adding, “I think the movement will only continue to grow.”

Even after the Capitol riot, 139 House Republicans – about two-thirds the party’s representatives – and eight of 51 Republican Senators still heeded the president’s call to challenge the certification of Electoral College results, despite his own administration’s findings of no significant fraud. They took the vote the evening after the day of the riots – when Congress members were forced to flee for their lives and hide, with some crawling across the floor of the chamber.

Yet even some who strongly backed the president’s claims of a fraudulent election believe the rift that Trump has created within Republican ranks will be an existential challenge for the party.

The assault on the Capitol was “absolute insanity” and “a huge setback” for Trump’s movement, says Alex Bruesewitz, who heads the conservative consulting firm X Strategies and helped organize pro-Trump protests of the election results. It allowed Trump’s Republican critics to say, “we told you so – Trump is a threat,” Bruesewitz says.

Before the riot, Bruesewitz believed Trump’s base would form a Tea Party-like movement, mount primary challenges against moderate, anti-Trump Republicans, and mold the GOP permanently in Trump’s image.

“A lot of the life was sucked out” of that effort by the Capitol uprising, Bruesewitz said. “There’s going to be a lot of jockeying for control of the party over the next two years.”

Betty Young, 78, a longtime Republican in Beaufort, South Carolina, fears the divisiveness will destroy her party.

A retired economist, she says she voted for Trump, believing he was a better choice than Biden, but now regrets it because of Trump’s rhetoric and behavior since he lost the election. She fears Trump’s diehard supporters will break away from the GOP, leaving the party badly weakened. She pines for a more moderate – and unifying – leader, such as Romney or former Ohio Gov. John Kasich.

“We lost,” she says. “Maybe there was some corruption in the voting, but what good is it to bring it up now? It’s just more divisiveness. Let’s get over it.”