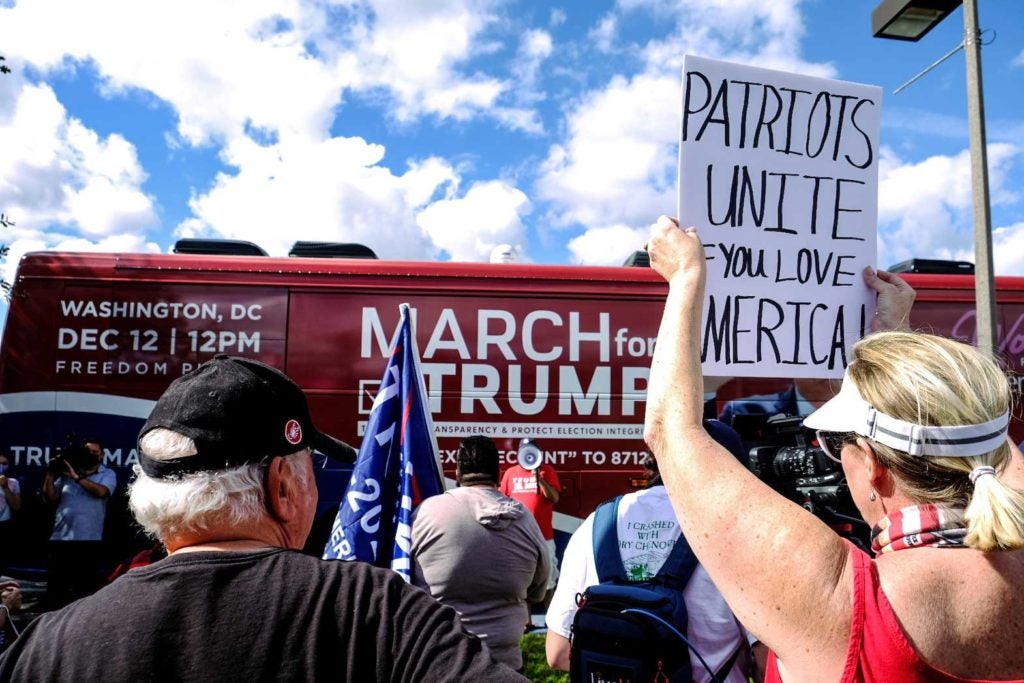 Weeks before mobs besieged the Capitol building in Washington, a bright red bus crisscrossed the United States, emblazoned with a huge image of President Donald Trump in suit and tie with a clenched fist above his shoulder.

At more than 25 stops – in parking lots and airplane hangars in states including Arizona, Georgia, Louisiana, Kentucky and Tennessee – flight-attendant-turned-political-activist Amy Kremer and other speakers exhorted crowds to join her and others in Washington to fight for Trump and overturn the election.

Last Wednesday, the tour reached its final destination, Washington D.C., and Kremer took to the stage at the “March for Trump” rally she had been organizing for weeks.

“It is up to you and I to save this Republic,” Kremer told thousands of self-styled patriots in Ellipse park, south of the White House, in one of many warm-up speeches for Trump. “We are not going to back down, are we? Keep up the fight!”

In the weeks leading up to Wednesday’s deadly riots on Capitol Hill, Kremer and a loose coalition of groups and sponsors rallied the faithful, recruiting hardcore Trump supporters across the United States in a last-ditch effort to overturn the Nov. 3 election, inspired by conspiracy theories and whipped into action by Trump’s desperate calls to “save” democracy by reversing his loss to Democrat Joe Biden.

The story of how the pied-pipers of Trumpism enlisted supporters illustrates the dramatic evolution of Trump’s voters into an effective and well-financed network of activist groups. The crowds that rally organizers recruited were joined in Washington by more radical right-wing groups that have increasingly become a fixture at pro-Trump demonstrations – including white supremacists and devotees of the QAnon conspiracy theory, which casts Trump as a savior figure and elite Democrats as a cabal of Satan-worshipping pedophiles and cannibals.

Others among the diverse array of promoters for post-election Trump protests included a pillow magnate, a right-wing college students’ organization, the newly formed activist network Stop the Steal and an upstart broadcasting group begun by a stay-at-home dad who devoted himself to chronicling Trump rallies, according to a Reuters examination of disclosure records and interviews with protest organizers.

Neither Kremer nor Women for America First responded to requests for comment. The organization posted a statement on its website saying it was saddened and disappointed by the Capitol violence, which it said was “instigated by a few bad actors.”

About two hours after Kremer’s speech, Trump took the same rally stage and exhorted this volatile mix of supporters repeatedly to “fight” – using the word more than 20 times – and “not take it any longer.” He ridiculed “weak” and “pathetic” Republicans and told the crowd they must “be strong” before dispatching the “patriots” on a march to the Capitol.

Many in the crowd of thousands took that fight to the Capitol Police with far more than fiery rhetoric, battling officers with a makeshift arsenal that included metal pipes, wooden poles with embedded nails, aluminum baseball bats, a hockey stick, a wooden door ripped off its hinges, and a coffee table, according to Reuters photographers at the scene and other videos posted online. One American flag waver bludgeoned an officer repeatedly with the flagpole as fellow rioters dragged the cop from the building and down a set of outside steps.

Five people died in connection with the Capitol violence, including a police officer, as well as a protester shot by police. That crescendo of violence followed two months of rising anger among Trump loyalists, harnessed by protest organizers including Kremer and many others. The stolen election narrative – amplified by right-wing media – quickly became gospel for millions of Trump loyalists despite the failure of dozens of lawsuits his attorneys filed claiming election fraud.

A White House official said the rally was organized by outside groups, and the White House became involved when the president decided to speak there. The official declined further comment.

Another important player and financier of the post-election protest movement was Mike Lindell, founder and CEO of the My Pillow company, whose advertisements and political commentary are a fixture on conservative media. Lindell – a self-described former cocaine addict and alcoholic who says he found sobriety through Christianity – helped sponsor a two-week March for Trump bus tour that ended in Washington on Dec. 14 and spoke at five stops.

My Pillow is a major advertiser and sponsor of the Right Side Broadcasting Network, a conservative media group that went along on the tour to provide daily coverage.

Lindell said his financial backing of the bus tour ended in mid-December. He emphasized to Reuters that he did not help finance subsequent trips to promote the Jan. 6 rally that would devolve into riots. He said he did, however, attend the rally before the march to the Capitol that day, and he spoke the day before during rallies at Freedom Plaza, near the White House.

The Capitol rioting has not changed Lindell’s views on contesting the election. “I’m never letting the fraud go,” he told Reuters. “It was the most corrupt election in U.S. history, and probably in world history.” (Christopher Krebs, a cyber-security chief for the Trump administration, called the election the most secure in the nation’s history shortly after the vote. Trump fired him.)

Then Lindell cited the latest baseless conspiracy theory circulating among right-wing groups – that leftist activists, masquerading as Trump supporters, were responsible for the violence at the Capitol.

For weeks after the election, Kremer’s organization fielded the big red Trump bus – emblazoned with the logo of My Pillow and other sponsors – to whip up supporters to assemble in Washington and contest the outcome. At stops for rallies, speakers mixed religious and nationalist fervor with incendiary claims about the election. Lindell spoke at five of them.

A Jan. 3 rally in Franklin, Tennessee – a stop on the bus tour – featured Pastor Greg Locke of Global Vision Bible Church, a firebrand who has railed against pandemic-related restrictions on church services. He praised the Boogaloo movement – a loose network of anti-government extremists that aim to foment a new civil war – for doing the Lord’s work by fighting Trump’s election loss.

“They stood up for what is right, and God promoted them,” he said.

Locke told the crowd to never give up the fight for Trump’s second term: “We’re not going to back up, pack up, stack up or shut up until we’ve been taken up by the glory of God.”

The rallies were covered start to finish by the Right Side Broadcasting Network – a right-wing media venture with close ties to Trump. The outfit was started in 2015 by Joe Seales, a stay-at-home dad who thought Trump’s rallies weren’t getting enough coverage. He recruited a freelancer to cover a Trump appearance and posted the raw video to YouTube. To his amazement, viewers grew by the thousands, then to a million, Seales has told media organizations. The network became a magnet for right-wing voices and jumped into the mainstream when the new Trump administration granted Seale’s team access to the White House press room.

Now with two dozen staffers and an office in Auburn, Alabama, the network has devoted post-election coverage largely to unsubstantiated allegations of voter fraud. Its correspondents touted its alliance with Kremer’s tour, and praised Lindell for his support of the network.

“My Pillow is one of the main sponsors for the Women for America First bus tour, and he is our partner for today,” one correspondent said during a report on a Jan. 2 bus stop in Little Rock, Arkansas.

Right Side founder Seales could not be reached for comment.

The Jan. 6 rally that preceded the Capitol riot was promoted vigorously by Trump and his loyalists.

“Be there, will be wild!,” the president tweeted on Dec. 19, one of several tweets touting the event.

Another sponsor of the Jan. 6 rally was Turning Point Action, the political action committee arm of Turning Point USA, a campus right-wing group headed by activist Charlie Kirk. Turning Point spokesman Andrew Kolvet said the organization added its name to the event after Christmas, at the request of Women for America First. “We didn’t organize the event. We sponsored it in as much as we helped students attend the rally and not the march,” Kolvet said.

Another group that joined with Women for America First to sponsor the protests was Stop the Steal, a network of activists who assembled in the immediate wake of President Trump’s election defeat, to organize rallies around the nation against Biden’s victory.

Women for America First brought on Stop the Steal as a sponsor, said Alex Bruesewitz, a conservative activist associated with Stop the Steal events. Stop the Steal set up a website that billed the event as a “Wild Protest,” a reference to the Trump tweet, Bruesewitz said.

When crowds headed for the Capitol before Trump finished speaking on Wednesday, Bruesewitz said he decided the scene was chaotic and skipped the march.

“I am disheartened,” Bruesewitz said in the aftermath of the storming of the Capitol. “No one wanted it to lead to this.”

Ali Alexander, a leading Stop the Steal activist, has continued to publish violent rhetoric since the riots. On Sunday night, in a new Internet video, he vowed: “We are going to punish the traitors,” referring to Republican politicians who endorsed Biden’s electoral victory. “The Lord says vengeance is his, and I pray I am the tool to stab these motherf—ers.”

After the riot, several websites promoting the march – including “Wild Protest” and “March to Save America” – went dark. But leaders of groups promoting the Jan. 6 rally showed no sign of conceding that Trump really did lose the election.

“Joe Biden will NEVER be my president,” Amy Kremer, of Women for America First, tweeted on Saturday.