Explainer: What’s there for Trump without social media? 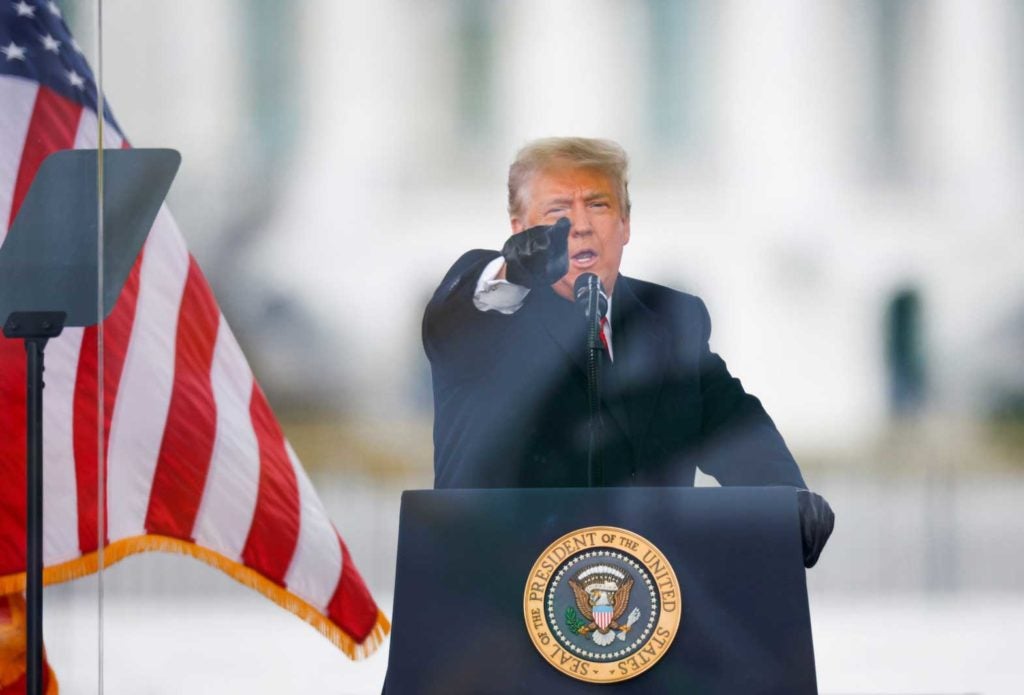 President Donald Trump gestures as he speaks during a rally to contest the certification of the 2020 U.S. presidential election results by the U.S. Congress, in Washington, U.S, January 6, 2021. REUTERS/Jim Bourg

The decision by tech companies to clamp down on President Donald Trump’s ability to speak to followers through mainstream social media may force him to tap more traditional methods of communication or more isolated conservative online channels during his final days in office, experts say.

Trump, who has without evidence challenged the validity of Democratic President-elect Joe Biden’s Nov. 3 election victory, praised and egged on supporters before they laid siege on Wednesday to the Capitol, where lawmakers were certifying the Electoral College vote for Biden. Five people, including a Capitol Police officer, died in the assault.

Apple, Google and Amazon have suspended Parler — a pro-Trump app where users have threatened more violence — from their respective app stores and Web-hosting services, a set of moves that stand to severely handicap the service.

The platform has 12 million users and Trump’s sons Donald Jr. and Eric are active on it, but it will now have to find a new Web host to replace Amazon to even stay in business.

HOW CAN TRUMP REACH HIS FOLLOWERS?

Immediately after the Twitter ban — a platform the president has been obsessed with since he first ran for office and where he regularly spoke to his 88 million followers — Trump vowed he would “not be SILENCED!” and promised a “big announcement soon.”

Trump also tweeted from the @POTUS Twitter account shortly after the ban and railed against the tech company, Democrats and a law protecting internet companies called Section 230, and said he was considering building his own social media platform. His tweets were almost immediately deleted by the company.

But striking out on his own will take time. For the moment, Trump, who leaves office on Jan. 20, is left with alternatives such as online conservative platform Gab, a free-speech network with almost no censorship rules, that has far less of a reach.

Aides and supporters are already turning to Gab and the platform MeWe to amplify his messages in the coming days, experts said. Other likely outlets are video platform Rumble and video streaming service DLive, along with alternate news sites such as American Media Periscope, said Monica Stephens, assistant professor at the University of Buffalo, whose research focuses on topics including social media.

“I don’t think Trump will join these smaller platforms himself. It is more likely he will create something on his own as opposed to joining something subjected to somebody else’s controls,” she said.

In the meantime, he can tap Trump-friendly networks such as Fox News, OAN and Newsmax to get his message out. The other underutilized option is the White House press office, experts said. He can continue to hold briefings or distribute statements and videos until the end of his term.

WHAT ARE HIS FOLLOWERS AND SUPPORTERS SAYING?

Immediately after the Twitter ban, backers such as Angela Stanton-King, a Republican supporter of the QAnon conspiracy group who ran in November to represent Georgia’s 5th Congressional District, and Republican Representative Thomas Massie began sharing their Parler accounts on Twitter, encouraging followers to move there.

Others such as conservative media host Rush Limbaugh deactivated their Twitter accounts.

Numerous Republican lawmakers denounced the social media company decisions as an attempt to stifle conservative voices and argued the moves would further polarize the country.

“We’re now living in a country where four or five companies – unelected, unaccountable – have the power, a monopoly power to decide, we’re going to wipe people out, we’re going to just erase them from any sort of digital platform,” Senator Marco Rubio said on Fox News.

Some liberal free-speech activists were uncomfortable with the moves too. The Electronic Frontier Foundation, a digital rights group, defended the right of Twitter and others to “curate their platforms,” but called for more transparency and consistency in decision making.

The American Civil Liberties Union said it “should concern everyone when companies like Facebook and Twitter wield the unchecked power to remove people from platforms that have become indispensable for the speech of billions.”

CAN ONLINE PLATFORMS SILENCE TRUMP AND HIS FOLLOWERS?

Silicon Valley companies have frequently tried, often without much success, to go after those peddling harmful content – from election disinformation to hate speech and violent threats – but their actions in recent days have been the toughest so far.

The First Amendment guaranteeing free speech does not generally apply to private-sector companies, allowing them to moderate speech that incites violence on their platforms.

“I think there was a legitimate public policy interest over the last four-plus years in maintaining the president and his voice on Twitter and other platforms. But clearly, what he has done has exceeded any reasonable public policy interest,” said Chris Krebs, former director of the Cybersecurity and Infrastructure Security Agency.