Trump ends term with fewer U.S. jobs than at start 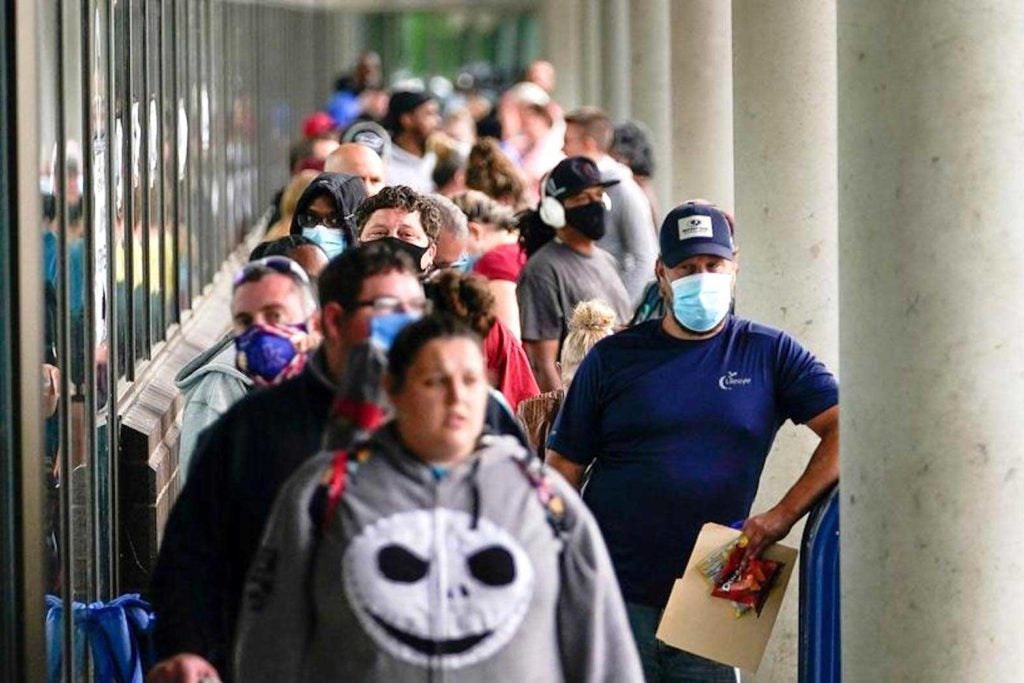 Hundreds of people line up outside a Kentucky Career Center hoping to find assistance with their unemployment claim in Frankfort, Kentucky, U.S. June 18, 2020. REUTERS/Bryan Woolston/File Photo

The final employment scorecard delivered during President Donald Trump’s administration on Friday handed the Republican a mantle no politician would envy: He will be the only modern president to leave office with fewer U.S. jobs than when his term began.

A global pandemic that Trump — who lost his bid for re-election to Democrat Joe Biden in November — was late to recognize and prone to downplay or outright deny through much of its course laid waste to the U.S. economy in the final year of his term. It erased all semblance of the booming job market that he had hoped would vault him to a second term.

Instead, as the Labor Department reported on Friday, total U.S. employment fell in December by 140,000 to 142.6 million, roughly 10 million fewer jobs than before the coronavirus pandemic struck.

The economic record books will count January’s employment figures in Trump’s column since he leaves office near the end of the month on Jan. 20. This month’s data will be reported in early February.

But there is no realistic expectation that payrolls will rebound enough to close the gap of roughly 3 million jobs between December’s level and that of January 2017, when Trump took office.

Trump’s final year in office was punctuated with economic superlatives, effectively all of them brought on by COVID-19 and the wave of restrictions on business and activity imposed to try to contain its rapid and deadly spread.

The outbreak – which has now infected nearly 21.5 million U.S. residents and killed more than 365,000 – triggered the swiftest and deepest recession of the post-World War Two era.

The unemployment rate rocketed from a half-century low of 3.5% in February 2020 to 14.8% in just two months as more than 22 million people were thrown out of work. While it has come down since to 6.7%, it is 2 percentage points higher than it was when he was sworn into office.

On that front, at least, Trump has company: He is the third Republican president in a row to leave office with a higher jobless rate than on his inauguration. Both President George W. Bush and President George H. W. Bush oversaw rising unemployment rates during their terms.

Through his first three years in office, Trump often pointed to the improving job market for Blacks in stump speeches, claiming no other American president had done as much to improve the lot of African Americans.

Some data bears that out. The Black jobless rate in late 2019 did fall to 5.2% – the lowest since the Labor Department began tracking it. That was still nearly 2 points higher than the rate for whites.

By December 2019, Black employment levels across the country had risen by 8.1% from where they were when Democrat Barack Obama – the first Black president and Trump’s predecessor – left office. By contrast job growth over that span for whites was 3.3% – albeit from a much larger base.

But COVID-19 wiped out all of those gains, and while Black employment levels have come closer to where they were at the start of Trump’s term, levels for both Blacks and whites remain below that.

Trump came to office promising a manufacturing renaissance as part of his America-first agenda under which he railed against imported goods and companies that had sent factories overseas.

There was some modest improvement in his first three years, with total manufacturing employment rising by 3.8%. But other sectors – especially in services – accounted for most of the job gains to then.

And it was to the services sector that COVID-19 dealt its harshest blow.

Jobs in the leisure and hospitality industries in particular suffered from measures to prevent the spread of the disease, and the newest surge in infections has revisited pain on the sector. While 140,000 jobs were lost overall last month, nearly 500,000 were shed in leisure in leisure and hospitality, and total employment in the sector is 18.5% lower than when Trump took the oath of office.

And what about manufacturing? There are 60,000 fewer factory jobs today than in January 2017.