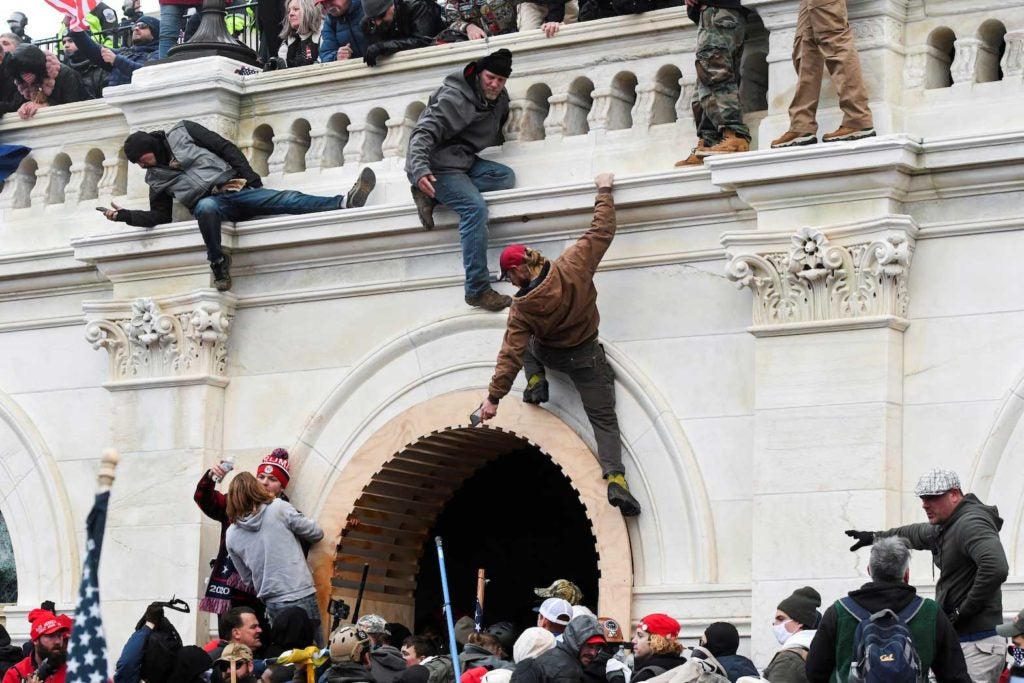 Supporters of U.S. President Donald Trump climb on walls at the U.S. Capitol during a protest against the certification of the 2020 U.S. presidential election results by the U.S. Congress, in Washington, U.S., January 6, 2021. REUTERS/Stephanie Keith/File Photo

WASHINGTON — As the mob swarmed into the U.S. Capitol, Pennsylvania congresswoman Susan Wild took cover, squeezing into a tight aisle in an upper-floor gallery and inching across the floor as supporters of President Donald Trump banged on the doors.

“That was when it really started to get scary,” said Wild, 63, describing Wednesday’s dramatic siege of the complex that houses the U.S. Congress. After she fumbled to work a gas mask and briefly lost a shoe while dragging herself toward a door to evacuate, gunfire rang out. Police shouted, “Get down. Get down. Get down!” as people screamed, Wild said in an interview with Reuters.

Moments earlier, as hundreds of rioters stormed the building, U.S. Capitol Police officers barricaded the lawmakers inside the chamber of the House of Representatives, where they had just started the final certification of electoral votes showing Democrat Joe Biden had beaten Trump in the November election.

“It wasn’t until things really escalated that there was a kind of a panicky state,” said the Pennsylvania Democrat.

A day after the historic security breach of the iconic domed building that houses the U.S. House and Senate, lawmakers told harrowing tales of their escapes from grave danger in the deadly mob assault that many say was incited by Trump. Several told Reuters that top Capitol security officials had assured them they would be safe ahead of the planned protests and that everything was under control.

As recriminations began in Congress, officials at other branches of government said they could have provided more people to secure the Capitol – but no one from the Capitol Police asked. A senior U.S. defense official said that the Pentagon had been in touch with the Capitol police last week and as late as Sunday but were told that they would not require assistance from the National Guard.

“We asked more than once, and the final return that we got on Sunday,” January 3, “was that they would not be asking DOD (the Department of Defense) for assistance,” said Kenneth Rapuano, assistant secretary of defense for homeland defense and global security.

The siege that left five people dead, including a police officer, and up to 60 officers injured, prompted lawmakers to demand an investigation into security lapses. Fallout has been swift. The Capitol Police chief will resign. House Speaker Nancy Pelosi said the House sergeant at arms would resign. And top Senate Democrat Chuck Schumer said he would fire the Senate sergeant at arms.

In interviews with Reuters and in public statements, lawmakers fumed over the failure of the Capitol Police – a 2,000-member force dedicated to guarding the Capitol Grounds – and other agencies. Lindsey Graham, one of Trump’s closest allies and chief defenders, said the invaders, many carrying weapons or unsearched backpacks, “could have blown the building up. They could have killed us all. They could have destroyed the government.”

“How could we not be prepared?” he asked at a news conference. If the Capitol Police had been in the military, he said, “they would have been relieved of their commands and most likely court-martialed” and tried for crimes in a military court.

Capitol Police did not respond to a request for comment on Thursday evening. Earlier in the day, U.S. Capitol Police Chief Steven Sund released a statement praising his officers’ response to an overwhelming situation. The department, he said, had a “robust plan” to handle “anticipated First Amendment activities.”

Sund, who on Thursday agreed to resign, described the “mass riots” as “criminal” and said the officers were “heroic given the situation.”

‘DOING THE BEST WE CAN’

For weeks, Trump had urged supporters to show up for a “wild” march to “Save America” in the nation’s capital on Jan. 6. In his speech that day, he repeated baseless claims of voter fraud in the election won by Democrat Joe Biden and exhorted his supporters to “fight.”

Despite danger signs leading up to Trump’s rally, several lawmakers told Reuters that top Capitol security officials had assured them in meetings they did not expect violence at the event. No one could get on the Capitol grounds and police had plenty of manpower to handle any incidents, the lawmakers said security officials told them.

Maxine Waters, Chairwoman of the House Financial Services Committee, said she had repeatedly warned Police Chief Sund and other police officials about growing evidence that right-wing extremist groups such as the Proud Boys and Oath Keepers planned to descend on the nation’s capital. There had been pervasive chatter on the web and social media platforms, she said, focused on how these groups would try to sneak weapons into the District of Columbia.

The California Democrat said she initiated a one-hour telephone call with Sund on Dec. 31. “They had assured us that everything would be under control,” Waters told Reuters in an interview.

She called Sund again during the riots, while barricaded in her office with her staff. She said she was frightened and furious at the lack of communication from police. Sund offered little comfort, she said.

As she watched the events unfold on the television in her office, Waters described the scenes to the chief as they talked. The chief, who seemed calm, told Waters several times, “We are doing the best we can.” She responded: “It’s not good enough,” and hung up.

Reuters was unable to reach Sund for comment Thursday evening.

Tim Ryan, a Democratic Representative from Ohio, was working in his Capitol office when the mob stormed the building on Wednesday. He said that ahead of Trump’s rally, he too had conversations with the Capitol Police chief and the Senate’s sergeant at arms, who both assured him they weren’t anticipating violence and had taken precautions to keep demonstrators away from the Capitol.

“The next thing you know, you turn on the TV and they’re swinging from the Capitol building with flags,” Ryan said in a video news conference with reporters.

Ryan questioned whether officials performed an adequate threat assessment and intelligence gathering ahead of the planned protests. He said he expressed concerns about possible violence to the top Capitol security officials leading up to the event, but was told the protests would be “pretty vanilla” with “maybe some dustups.”

OFFERS OF HELP TURNED AWAY

Army Secretary Ryan McCarthy said that there had been no military contingency planning for the Capitol because the Capitol Police had not made any requests in the lead-up to the protests.

Defense officials also said that intelligence reports provided by law enforcement did not suggest any threats of the kind of violence that broke out Wednesday. The reports’ estimates of expected crowds varied wildly – from 2,000 to 80,000, they said.

“It was all over the board,” McCarthy said, noting the military relies on law enforcement for information on potential threats in a protest. “So it was very challenging.”

The actual turnout was difficult to estimate but crowds numbered in the thousands, enough to easily overwhelm police when the Capitol was stormed.

Rapuano said there had been some mention of social media discussions on pro-Trump online forums about Jan. 6 demonstrations during interagency meetings that were chaired by the Department of Justice. But “overall the assessment that we got repeatedly was no indication of significant, significant violent protest.”

Sources familiar with planning at the Homeland Security and Justice departments also said the agencies were not asked to provide security forces for the Capitol beforehand, in contrast to their deployment during last summer’s racial justice protests. The Justice Department sent 500 law enforcement officers from the Federal Bureau of Investigation and four other offices to the Capitol on Wednesday – but only after the rioting was under way.

“The outside of the Capitol should’ve looked like a scene from the ‘Game of Thrones,’” Ramsey told Reuters, referring to the popular – and violent – television series. “They would’ve already been on the ground and had the gear on. They would’ve been ready.”

Congresswoman Nikema Williams had arrived on Sunday at the Capitol for her first day as Georgia’s newly elected Democratic representative. She remembered staring up at the ceilings and taking pictures, thinking, “I’m in a building where I feel secure and safe, and nobody’s getting through here,” she told Reuters.

That sense of security was shattered days later. She arrived early on Wednesday to avoid the expected crowds and wasn’t concerned. She was watching the vote on a TV in her office and realized something was wrong when she saw House Speaker Nancy Pelosi escorted away.

She said the official security emails were vague and lacked specifics about what was happening. “If it hadn’t been for Twitter, and the group texts and emails that I was in, I would not have any information,” she said.

New Congressman Jamaal Bowman, a Democrat, said he had stronger security protocols and briefings at a New York City middle school where he served as principal. He said members of Congress were advised to arrive at their offices early and stay inside the buildings because of the expected protests, but received no security briefings and no communication about possible dangers inside the building.

“It was a debacle,“ he said. “To come to Congress, which should be the most secure place in the country, and be here for three days and the Capitol gets breached, I’m blown away.