SAN FRANCISCO – The Filipino community in San Francisco turned the tables on Philippine Consul General Henry S. Bensurto Jr. as he wound down his tour of duty that ends Dec. 31.

In his final act of presiding at “Tanong ni Congen,” the online program he launched in the summer to assure connection with constituents and continuity of service during the coronavirus pandemic, Bensurto surprised no one by reminding viewers on Dec. 30 to continue “falling in love” with their community and their heritage.

But the surprise was on him when the program segued to a farewell video from community partners who have taken the envoy’s constant message to heart.

“Wish you the best as you model the finest qualities of the Filipino wherever you go,” a nonprofit organization offered compliments, among many that had been coming Bensurto’s way for days.

A week earlier, Bensurto was the focus of an episode of his program, where he typically interviews Filipino and Filipino American leaders and providers.

The diplomat instead ended up replying to questions from Bay Area organizer Esther Chavez and artist Dandin Ranillo in what they dubbed “Congen Henry Bensurto: Up Close and Personal,” an hourlong conversation aimed at peeling the many layers of the man. 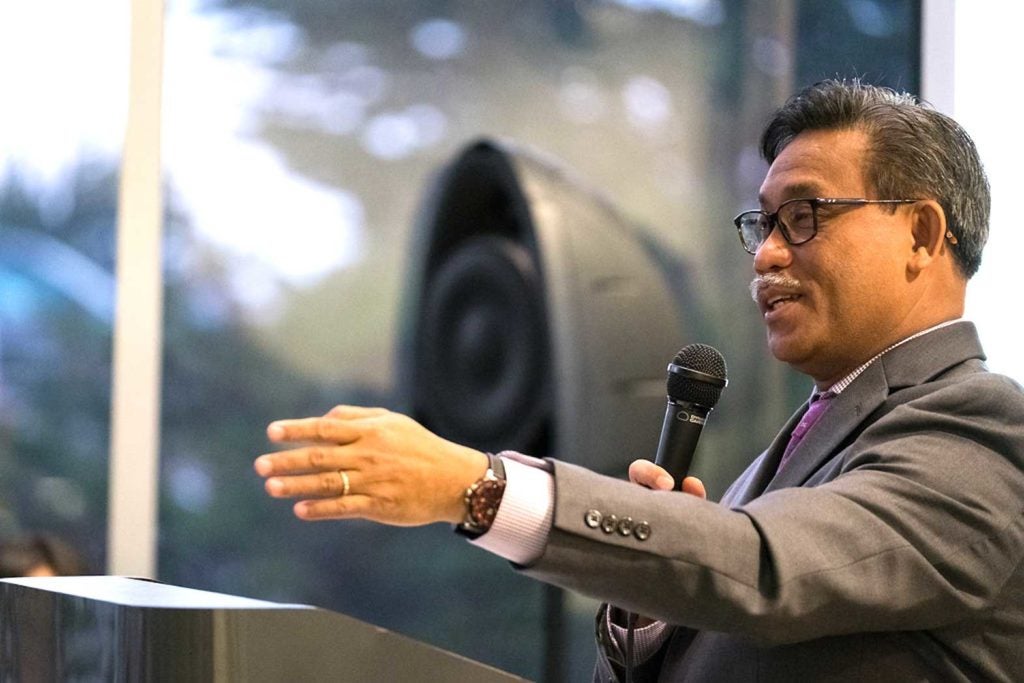 In rapid-fire Q&A, the co-hosts began by posing questions ala-“slum book,” Chavez introduced a high school activity popular among Baby Boomers but perhaps a bit ahead of the subject’s era.  A poised Bensurto gamely bared his favorites:  dish (kare-kare); song (“Forever More” which he volunteered is his and wife Mariza’s “theme song”); place (wherever Mariza and their son, Henry Matthew, are).

Light as the interview was, Bensurto showed erudition with a quote from his favorite book, J.R.R. Tolkien’s Lord of the Rings, where the wizard Gandalf responds to Frodo’s regret to have seen tragedy in his time:   “All we have to decide is what to do with the time that is given us.”

Fact is, Bensurto has racked up quite a few achievements in his 55 years.

Prior to taking his seat in 2014 as the highest ranking representative of the Philippine government in and parts of 10 states including Northern  California, he had capped a triumphant tenure as the lead on the Department of Foreign Affairs team directing negotiations with China in the ASEAN dispute over the West Philippine Sea, the country’s designation for the eastern portion of South China Sea.

He developed the foundation for what became the legal framework for the Philippine claim against China before the Arbitral Tribunal in the Hague.

For his first two years in office on 447 Sutter Street here, “Congen,” as he also refers to himself, was pulling double duty giving direction to consular management and being the face of Philippine nationals in his jurisdiction by day.  At midnight, he would switch to principal in the brain trust on the UN Convention on the Law of the Sea and the West Philippine Sea/South China Sea issue, conferring with peers on the progress of the Philippine position.

His dedication paid off:  In 2016, the international court ruled in favor of the Philippines.

Bensurto toiled to protect and defend his country against foreign encroachment, an accomplishment he fully acknowledges as a personal best in his passion to serve.  He could not be prouder for the opportunity to “restore the dignity of every Filipino past, present and future by winning the case against China, proving the precedence of rule of law over force.”

Another feather in his cap is the initiative he conceptualized to kindle pride in being Filipino among the next generation.  He calls it “Spark*Connect*Empower” or, given his penchant for acronyms, “SCE.”  With its own battle cry “Pinoy ako, Proud ako!” declared with a fist pump, the movement has attracted some 60 organizations and individuals  who have signed on as partners in a “collective nation building.”  The movement, he says, is the “top overall framework governing the consulate.”

He keeps an eye on both form and substance.

While upgrading the delivery of consular services, he made the consulate a haven for Filipino Americans of every generation who were thirsting for knowledge about their heritage.  He directed improvements on the Philippine Center’s  Museo ng Lahi, home to two Amorsolos and Rizal mangas, the Japanese modern art genre.  On his watch, space on the sixth floor was transformed into Sentro Rizal, the Carlos P. Romulo Hall, honoring the statesman who was also a general and a journalist, and a gallery featuring previous heads of the first Philippine diplomatic mission in California founded in 1946.

Bensurto bridged the community with resource providers at Talakayan sa Konsulado, a platform for free live presentations.  Big on networking, he launched the Sparkup Meetup series to bring together entrepreneurs from both sides of the Pacific to generate collaboration.  He gave participants a space called Spark447, echoing the Philippine Center address.

When COVID-19 blew into town and the shelter in place mandate came down, the consulate pivoted quickly to the “new normal” by adjusting schedules for services.  Bensurto made himself visible via social media, again bridging the community with public and private entities ready to help as businesses closed down, raising food insecurity.

Social distancing demanded the debut of “Tanong ni Congen” on May 13 with the Consul General and the entire management providing information that comforted isolated families.

“I’m lucky to have a good set of officers as persons and professional, on whom I rely a lot,” he praised Deputy Consul General Raquel Solano, Consuls Jed Martin Llona, Vanessa Bago-Llona and Dominic Xavier Imperial.

They share his belief that service is for others, not for themselves, as embodied in the pledge every member of the consulate recites each Monday to “remind us of who we are and what we do as public servants who understand the dignity of work and internalize our sense of worth.”

By the end of the 60-minute program aired on Facebook Live, Bensurto disclosed some fun facts.  He enjoys theater, watches and analyzes telenovelas, paints, and has started making dioramas.

He revealed himself as the same person in the office as he is at home, echoing his guiding principle of “falling in love” with everything he embraces: his wife and son literally, and his work figuratively.

That was the same motivation he had attributed to Senator Benigno Aquino Jr.’s ultimate sacrifice, in closing remarks at the Mass commemorating the latter’s 37th death anniversary in August.  Aquino “fell in love” with his compatriots and believed them worth dying for, said Bensurto, who was among the student activists inspired by the lawmaker’s rejection of tyranny.

Bensurto, a Malate Catholic High alum, distinguished himself in academics.  He earned his BA in Political Science at the University of the Philippines, followed by a law degree at San Beda College of Law.  He sought higher education overseas, including the foreign service program, with distinction in Public International Law at Oxford.  He acquired a diploma from the Law of the Seas at Rhodes Academy of Oceans Law and Policy in Greece. 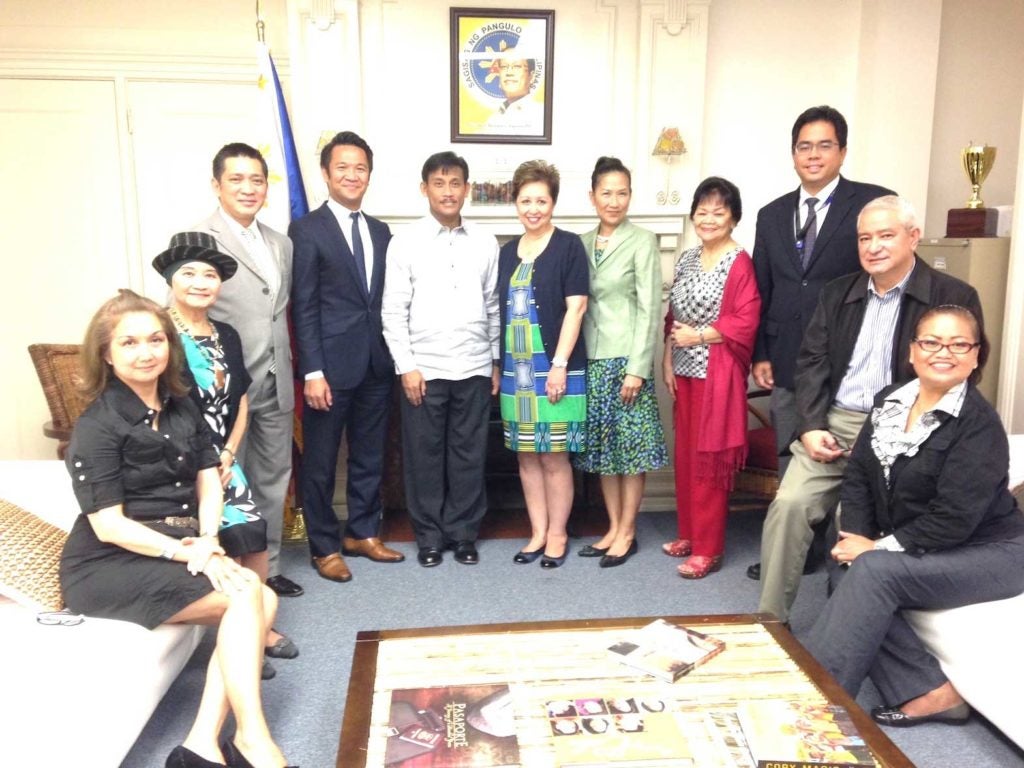 His credentials wow his colleagues. On hearing that Bensurto was concluding his current tour, former Ambassador to Germany Millie Sta. Maria Thomeczek hailed his love for his family and his work.

“Ask any issue pertaining to our West Philippine Sea concern and he is the man to answer.  He is an expert and champion on the subject,” said the recently retired envoy who then offered another insight into his peer: “Henry is a devoted family man and puts his great trust and love for God as his priorities.”

He speaks softly and slowly but is articulate and can be prone to extended elaboration if encouraged.  He is brilliant but unassuming.  His folksy ways have endeared him to Filipino Americans, who appreciate his accessibility.

He likes to think of himself as an “ordinary person, full of faults and flaws but tries his best to be a good man especially to his family and to others.” He adds that he “may not be successful all the time but tries to fulfill his duties” as best as he can with much support from his wife, to whom he says he “owes everything for the sacrifice she makes being wife of a public servant.”

COVID-19 robbed Bensurto of the grand fanfare typical of his predecessors’ sendoffs, but a certain intensity characterized the intimate salutations he received.