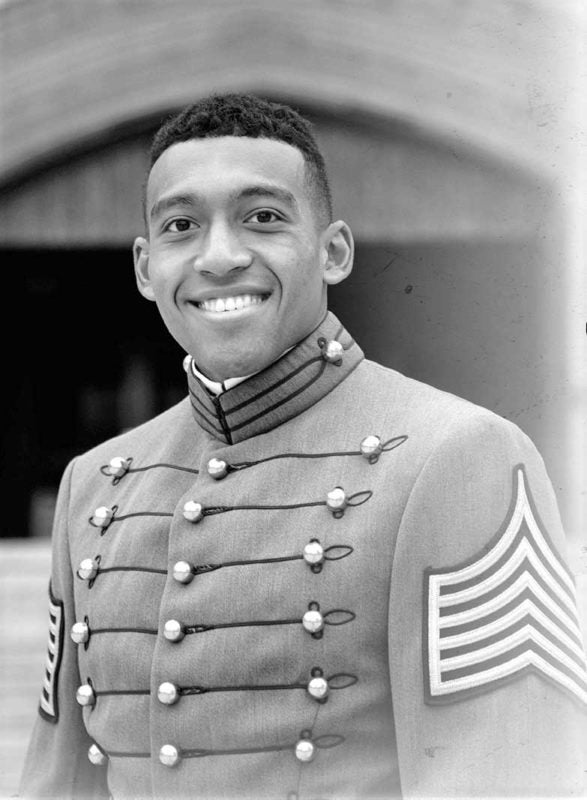 Tyrese Bender has been described as a kid who is ‘solid as a granite.’ PATRIOTLEAGUE.ORG

West Point Cadet Tyrese Bender, the son of a single Filipina mother who has served in the U.S. Army, was among 32 recently named U.S. Rhodes Scholarship awardees.

Rhodes Scholars are chosen not only for their outstanding scholarly achievements, but also for their character, commitment to others and to the common good, and for their potential for leadership in whatever domains their careers may lead.

“Their achievements and this prestigious recognition are testaments to their hard work, empathy, and intellectual curiosity, and to the strength of the West Point community that supported their endeavors each step of the way,” Brig. Gen. Cindy Jebb, Dean of the Academic Board in a press statement on the academy’s Rhodes scholars (Cadet Evan Walker is the other scholar).

Bender credits his Filipina mother, Maria, with instilling in him a strong work ethic. A CBS report says she served in the Army for eight years.

“My mom, she really ingrained in me this idea that if you want something you have to go get it,” he told CBS’s Norah O’Donnell. She’s a single parent who raised two children, she came from the Philippines.”

Asked by O’Donnell what his mother said about him being a Rhodes Scholar, Bender beamed, “It’s what she didn’t say; she won’t stop crying.”

Bender, an engineering management major, is the deputy brigade commander, a two-year track team captain, and contributor to the inaugural U.S Corps of Cadets Diversity, Equity and Inclusion Strategy.

“We are extremely proud of Tyrese for all of his accomplishments and this achievement is right there at the top of the list,” Army Director of cross country and track & field Mike Smith said in the Patriot League website. “He is one of those kids that is as solid as the granite that forms the foundation of much of this institution. He has been a team captain now for two years and is the type of leader that attracts followers through his example and his quiet confidence.”

At Oxford University, he intends to earn a Master of Philosophy in Sociology and Evidence-Based Social Intervention and Policy Evaluation.

The Rhodes Trust, a British charity established to honor the will and bequest of Cecil J. Rhodes, provides full financial support for Rhodes Scholars to pursue a degree or degrees at the University of Oxford in the United Kingdom in partnership with the Second Century Founder, John McCall MacBain and other generous benefactors.

Former President Bill Clinton, New Jersey Senator Cory Booker, and journalist Rachel Maddow are among the notable personalities who have been awarded the prestigious scholarship.

The U. S. Military Academy at West Point is a four-year, co-educational, federal, liberal arts college located 50 miles north of New York City. It was founded in 1802 as America’s first college of engineering and continues today as the world’s premier leader-development institutions. @The FilAm

For more information, go to www.westpoint.edu.