Irked by loss, Trump hunkers down, avoids talk of future 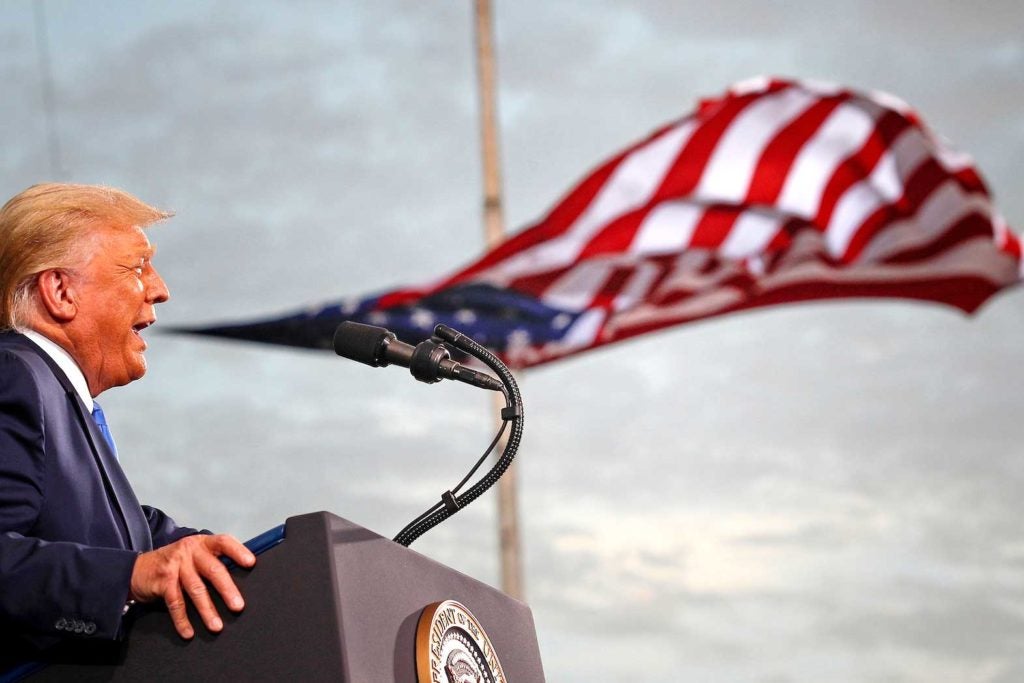 President Donald Trump speaks, with a flag behind him, during a campaign rally at Cecil Airport in Jacksonville, Florida, U.S., September 24, 2020. REUTERS/Tom Brenner/File Photo

WASHINGTON – Hunkered down in what one former White House official called the “presidential man cave” of the Oval Office, President Donald Trump does not want to talk about what lies ahead once he leaves office next month.

Several people familiar with the situation say he knows his time is up even as he presses the fight against the election outcome, despite having failed in a series of court challenges to overturn the results of the Nov. 3 election that made Democrat Joe Biden president-elect.

With Monday’s Electoral College vote certifying Biden’s win, White House staff members are looking for jobs and planning their post-administration futures. First lady Melania Trump has looked for a school in Florida, where the couple is expected to reside, for their son Barron, People magazine reported.

A source close to Trump says he does not want to talk about the future beyond his remaining days in office. Any suggestion that he begin laying the groundwork for another run for president in 2024 is shunted aside, at least for now.

“He wants no conversation about what he’s going to do when he leaves the building,” the source said, asking for anonymity to speak candidly. “He’s convinced he’s leaving, but he compartmentalizes things. As long as he’s the president, he wants to be the president.”

Although an extrovert through his four years in office, Trump has largely closed himself off from the public in recent weeks, communicating mostly through tweets. He has done little to show he is focused on governing other than speaking at an event to highlight the speed of coronavirus vaccine development.

He has not played a significant role in responding to the computer hack that targeted the U.S. government, one administration official said. “This is not his wheelhouse, and it also involves the Russians, which complicates things.”

Trump confers with a coterie of advisers including Vice President Mike Pence and chief of staff Mark Meadows, who update him on vaccine distribution and stimulus talks under way in Congress.

The president has brought in members of his campaign team for updates and to urge them to keep fighting.

His refusal to concede the election is egged on by endless phone conversations with his lawyer, Rudy Giuliani, and what the former White House official called “a rag-tag collection of lawyers that has kept the torch lit.”

Trump has declined to concede the election. He spends long days in and out of the Oval Office, sometimes not retiring to the residence until after 8 p.m., calling allies and aides to discuss strategy. He has spent weekends at his nearby golf property and done one trip to Georgia to campaign for Republican U.S. Senate candidates.

He frequently emphasizes to advisers that he got 74 million votes, 9 million more than Democrat Barack Obama did in his successful re-election bid in 2012. Biden’s 80 million, he tells them, points to fraud.

Trump is irked at his fellow Republican, Senate Majority Leader Mitch McConnell, for announcing on the U.S. Senate floor this week that he considered Biden the president-elect, two of the sources said.

The sources said Trump has been brushing off aides urging him not to carry out a threat to veto a massive defense bill, because he does not feel like he should reward McConnell for what he regards as bad behavior.

Trump opposes the $740 billion National Defense Authorization Act because it does not repeal a law that gives big tech companies liability from lawsuits. Another source said Trump had been advised his veto would be overridden, though some in his circle still advised him to go through with it.

Trump and his legal team have been preparing a number of potential pardons for him to carry out before leaving office, including for some close allies who may face legal jeopardy, one of the sources said.

Along Pennsylvania Avenue in front of the White House, a cacophony of noise erupts daily from the construction of platforms for Biden’s Inauguration Day events on Jan. 20.

One source said it was hard to imagine Trump showing up for the inaugural ceremonies and sitting behind Biden, having derided his Democratic rival on the campaign trail as incompetent. Trump has declined to say whether he would take part in the long-standing custom of showing the world a peaceful transfer of power.

What comes next for Trump is a matter of speculation.

A source close to Trump said he has in the past toyed with the idea of announcing a 2024 run on Inauguration Day to divert attention from Biden. That person and another source said Trump is being advised to put off an announcement about running again, and instead simply tease the possibility, because being an official candidate would invite a level of scrutiny he might not want.

The former White House official noted that Trump’s musings about running again would only give Democrats fodder to investigate him in years to come.

Trump faces a range of civil and criminal legal actions related to his family’s businesses and his activities before he took office, which could accelerate once he loses the legal protections granted the occupant of the Oval Office.

“If you want to lessen the chances of there being congressional investigations into 2021 and 2022, the best thing he can do for himself would be to stop these trial balloons,” the former official said.