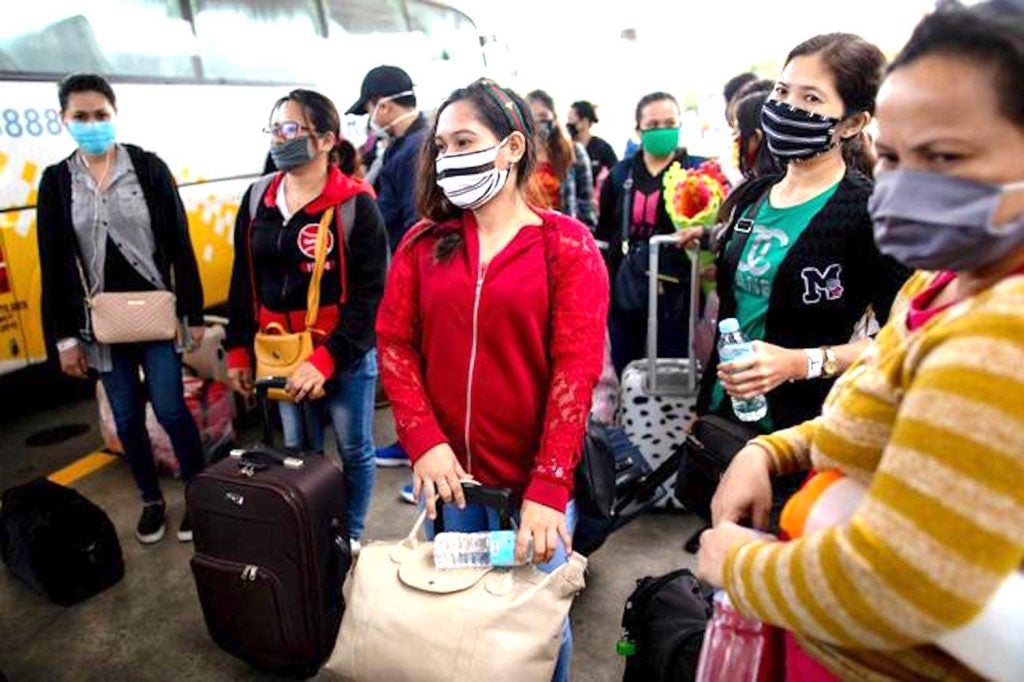 Repatriated Overseas Filipino Workers or OFWs arrive at an airport after being allowed to go home following weeks of quarantine amid the spread of the coronavirus disease (COVID-19), in Pasay City, Metro Manila, Philippines May 26, 2020. REUTERS/Eloisa Lopez

In celebration of International Migrants Day and in line with this year’s global theme #WeTogether – Stories of Social Cohesion, The Center for Migrant Advocacy (CMA), a non-government organization, is launching its own local campaign: #KwentongKababayan – Stories of our Kababayan, Becoming a part of the OFW story.

The #KwentongKababayan campaign will give faces to the stories of OFWs during the COVID-19 pandemic, while also underscoring how government benefits like health care should be viewed as a right, not a gift or privilege.

Poor working conditions, abuse, discrimination, and family separation are not uncommon issues for many OFWs. However, in the face of COVID-19, these issues have only gotten worse. Wages, working hours, and employment protection benefits have been reduced for many OFWs during the pandemic. Not only does this impact workers themselves, but the families they provide for too. Social distancing measures and self-isolation have been made virtually impossible for OFWs in cramped living and working conditions or those working around the clock in frontline healthcare positions.

Here are a few of their stories.

The OFW lifestyle is not glamorous, and they should not be discriminated against

In 2014, Awheng Ocado made the difficult decision to become an OFW to sustain her family. She took a job as a cook in a casino in Macau, leaving her two young children behind. Now, her career is under threat from the coronavirus pandemic.

Macau is heavily reliant on tourism, being home to 39 casinos in just 33 square kilometers. Having learned from the 2003 SARS outbreak, authorities moved quickly to counter the virus, implementing compulsory hygiene measures in January and closing all casinos on February 5. Awheng has been on forced leave ever since. She was able to secure a small emergency stipend from the government but it was not enough to pay for her basic needs in the long term. Many of her OFW friends and acquaintances have been taking up odd jobs, at any pay, just to keep a roof over their heads. 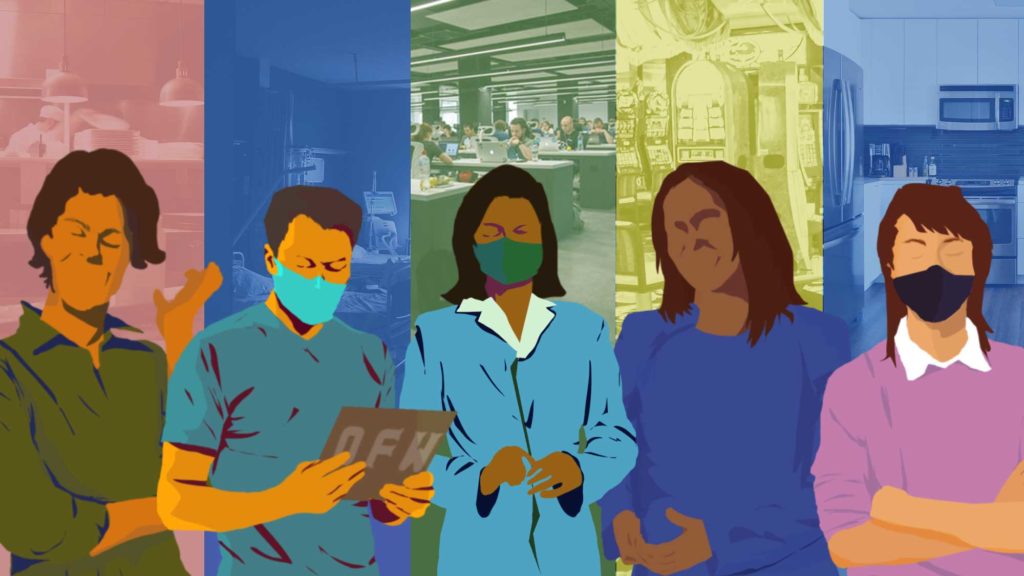 Going home isn’t an option for many. If they leave Macau they can’t come back because of the pandemic, and will eventually lose their work VISA. Those who have already been laid-off face the prospect of being homeless in a foreign country without a valid VISA, and if their work contract ends before the fixed date, Macau law forbids them from taking another job for six months.

OFWs like Awheng are essentially trapped: the pandemic on one side and the strict controls placed on migrant workers on the other. The pandemic has also made it harder to get help. While the consulate is encouraging the use of their online services, replies are slow due to the overwhelming influx of messages they receive on the daily. Awheng knows OFWs who have eventually given up on the agonizing wait, who are merely praying for a miracle to happen.

Liza has been working in Hong Kong for 18 years as a domestic worker. While the pandemic has caused many OFWs to be without work, it has conversely resulted in more work and greater stress for domestic workers.  “I have more cooking to do and I need to budget my time, on the other hand, many of my friends were released from their work because their employers don’t have work anymore, so they need to go back to the Philippines, they have a hard time to find another job”, says Liza.

During the pandemic, her mother and children have been unable to apply for financial aid or loan from the government in the Philippines as Liza is working abroad. “They think that being an OFW means that you have lots of money, so they will not help our families in the Philippines”.

Despite her mother’s senior citizen status, and their financial instability during the pandemic, Liza’s family has been discriminated against and deemed ineligible for government support.

As a domestic worker, the average working day can be almost 24-hours as living with employers can result in no work-life separation.

The dissemination of information for overseas workers, she explains, has been useful in her own experiences with her employers. “There are lots of domestic workers here in Hong Kong, hundreds and thousands, so many of them as I have experienced, many of them still don’t know their legal rights, they don’t know what to do when they encounter problems with their employers, and regarding their employment”. She explains many OFWs overlook this as they believe, if they are not being discriminated against, they will not need this support.

From an OFW to an OFW: Be there for each other

Holding a government-based job, Joseph shares his experience abroad in UAE where many OFWs reside.

“Social life actually stops for a while especially with the lockdown and quarantine rules placed by the government. Here in UAE, we have been stuck inside our home for months with a curfew from 8pm to 6am.” Although he is fortunate to be allowed to work from home, he also tells us that his work time significantly increased.

Despite having a promising career back in the Philippines, he still chose to move abroad to be with his wife who was already at UAE before him. In addition, Joseph has many OFW relatives, and this likewise influenced his decision to work abroad.

Moving overseas regardless of their financial status was still an opportunity. Having experiences during that transition was an important factor in our growth as people of society.

Although the Philippines has a variety of employment options, we cannot deny that moving overseas means more and sometimes better opportunities for stability, financial freedom, medical aid, and government support that you may not get back home.

Claire works in the corporate body of a highly successful multinational hotel company in Dubai. Unlike most OFWs, Claire’s family is financially settled and there is no need for her to send home a huge proportion of her pay. As a result, she was able to focus on advancing her career. Also, without a partner and children, the emotional burden of leaving home has been minimal.

Claire is the first person to acknowledge her position of privilege.

“I am [lucky] because I went here under different circumstances, but the majority of Filipinos who are working abroad because of the money…It’s to send their kids to school and support their families.”

During the COVID-19 pandemic, OFWs have been suffering in silence about the reality of pay cuts and their wages, and just how little of it is left after they send their remittances home. The pandemic has worsened the cracks in the system and it has become glaringly obvious how close many OFWs are to homelessness and abject desperation.

To her, improving OFWs’ lives requires a community effort, government initiatives, and policy reform, and a major commitment at home from the families and friends of OFWs being willing to sit down to have an honest conversation about money.

Choosing to stay anonymous, ‘Natsu’ shares her story as a Filipino migrant living in Los Angeles and working in the hospitality sector. Like a lot of people in the service industry, Natsu lost her job because of the pandemic. Thankfully, she has been able to pull herself back up bit by bit with art. In 2012, her family decided to move to the US during her second year in college. Natsu has an older brother who recently entered the US army after losing his previous job.

Going abroad was a big move for Natsu. When she went to the US, she didn’t know what to expect or if she would ever fit into a new culture and society. Now that she is dealing with her loss of work and the other problems caused by the pandemic, she feels that having a support group like her family helps her a lot.

Natsu also has friends back in the Philippines. However, this would sometimes cause problems. Since she is making dollars, they weren’t shy when it came to asking her for financial support.

“I didn’t want to be considered a ‘kontrabida’ (villain)… because I understand people are struggling back home. But… when I do ask for the money back, they have the audacity to get angry at me even though I sent whatever is left of my own pocket to them.”

Unfortunately, there is this notion that OFWs are living their best lives because they live abroad. For Natsu, it hurts that they don’t understand the severity of the pandemic to migrant workers especially those who have troubles with their employment status.

Misunderstandings on their lifestyle, income, and workplace conditions fuel the notion that OFWs have plenty to give and are in some ways obliged to fulfill the needs of anyone who reaches out to them–even if it’s at their own expense.

There are 2.2 Million Overseas Filipino Workers (OFWs) as of the latest data from the Philippine Statistics Authority (June 2020), and the remittances that they contribute to our country amount to a staggering USD $32.2 Billion — or 10% of our GDP.

Most OFWs appreciate the moniker bagong bayani (modern-day heroes). While it certainly describes their optimism, pragmatism, and innovation, it also seems to paint them as people who may not need the protection of policy reform because they can handle anything. They can’t—and we shouldn’t expect them to. OFWs toil away to support their families and the Philippines. Migrant workers give everything they have for family, and the Philippines. They all deserve to have greater protections under the law and stronger rights as workers.