Fil-Ams weigh in on Biden’s task of healing nation 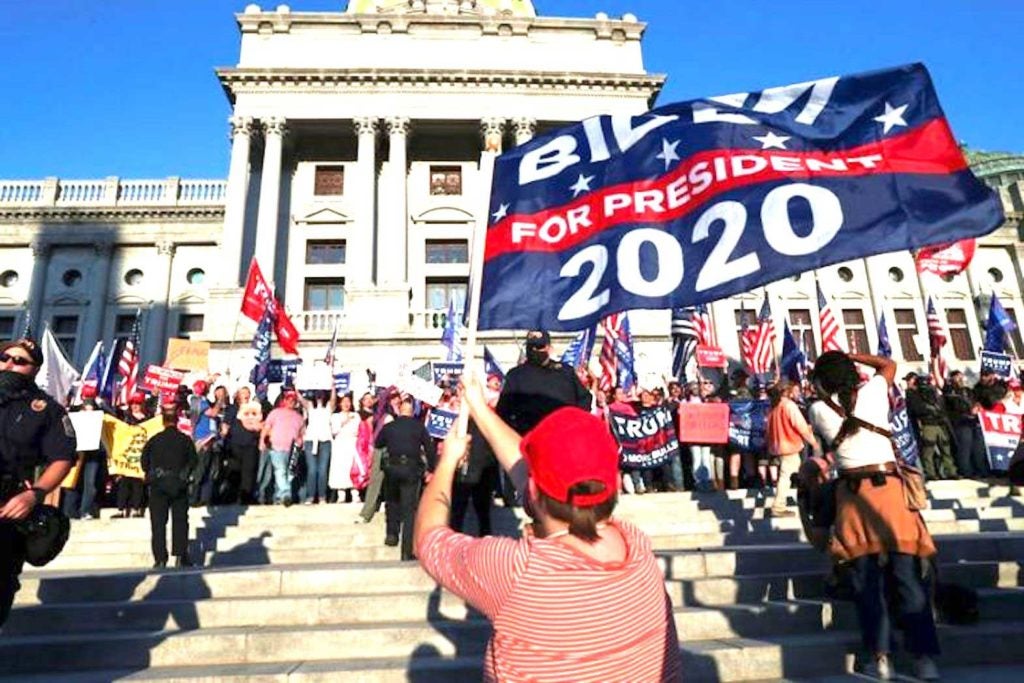 Supporters of U.S. President Donald Trump rally as a supporter of Democratic presidential nominee Joe Biden celebrates outside the State Capitol building after news media declared Biden to be the winner of the 2020 U.S. presidential election. REUTERS FILE

SAN FRANCISCO – More than a month after the hotly-contested Nov. 3 presidential election, some Filipino Americans sounded off on what President-Elect Joe Biden must do to become the healing and unifying leader of a polarized nation.

Democrat Ronnie Sabangan of New Jersey thinks it will help if Biden creates very diverse representations in the government to foster more voices, especially from those in the minority.

“In the process, Biden would set an example. It will also help if there are more town hall-type meetings in the effort to create initiatives to involve the community. While he is at it, he may also want to reach out to nonprofit organizations that help immigrants of all ethnicities,” Sabangan adds.

Cristina Osmeña, an avowed Republican who ran in the 2018 midterm elections, acknowledged that it had been a divisive and unpleasant election season where the electorate delivered mixed results. \

“Instead, they voted in more Republicans to the House of Representatives, though they are still the minority, and will likely keep the Senate under Republican control. Joe Biden must now transform from candidate Biden to President Biden. Without a clear mandate to pivot policy, he is still poised to become the next leader of our country and of the free world,” Osmeña remarked.

“I hope he heals the divisiveness by reaching across the aisle, allocating some appointments to centrists or (even) Republicans, and using his podium to speak the rhetoric of unity. Leadership really can make a difference. A president’s leadership really can influence our culture. I hope his messaging is strong and filled with compassion and generosity.”

But other Fil-Am conservatives are not ready to concede that Trump lost. Orange County California resident Marc Ang, who describes himself as an independent community organizer, stressed that it was premature for news media to declare a winner “in a race where so many states are at razor-thin margins” and  “voter fraud is rampant as documented by many cases in different states.”

“If Joe Biden prevails after the lawsuits and recounts, we will hold Joe Biden to the same standards as President Trump. Thinking the worst of people on our side and implying we would act the same way as the arsonists and looters from the BLM movement should also be denounced, especially when the right has very few documented cases of violence and crime, in aggregate. This false equivalence must be brought to light, after 20+ years of media bias in helping the Democratic Party and the left, in general,” Ang strongly believes.

Sacramento-based state government employee Republican Steve Leonardo echoes Ang’s observation on media bias. “For example, I see live reports of riots and fires in the background while the TV host continues to state that it is mostly peaceful,” Leonardo rues. “In the last four years, for instance, the media has not written about or highlighted the First Lady. There are many things to do but the one biggest thing is to deal with the neutrality of the media.”

A self-employed contractor and independent voter from Portland Oregon who would only identify himself as J.D. says Trump’s presidency “normalized uncivil behavior and offered a veneer of legitimacy to groups and movements that are its core antithetical to the American vision.”

“(Most) Americans can distinguish the rightness from the wrongness of things, so to unify the country, Biden just has to lead with character and decency again. When you normalize civil behavior, call out bad actors, and hold out-of-line conduct accountable, those base elements in society, which revealed themselves (during) the outgoing failed leadership, will either shrivel under the light or crawl back under their rocks,” J.D. adds observed.

J.D. also exhorts Biden to immediately act on the pandemic, including restoring a pandemic response plan that President Barack Obama had, and the retention of Dr, Anthony Fauci (whom Biden already asked to stay) and Drl Deborah Birx as holdovers from the Trump administration. He must avoid the politicization of what should be a health issue, develop and execute a free testing and vaccine plan, and a comprehensive stimulus plan for individuals, the self-employed, and small business.

J.D. also hopes Biden would act to improve racial and police-civilian relations, the Deferred Action on Childhood Arrivals (DACA) and immigration reforms, among other reforms.

Jennifer Navarro-Marroquin, co-founder and program director of Community Well in San Francisco and a Democrat who traces her roots to Angeles City Pampanga, acknowledges that Biden is walking into a presidency filled with crises and national hardships.

“For him to bring healing to our country, he needs to model true leadership throughout his term. It is also necessary for him to create a national environment that fosters empathy for others, and an understanding that the strength of America lies in its diversity. He will need to ensure that these very important factors are integrated into local and national policies, which can start the process of much needed systemic change,” Marroquin says.

She also regards building a bridge between political parties, and getting them to be able to negotiate and work together for the betterment of all rather than for personal gain or agendas is Biden’s biggest challenge.