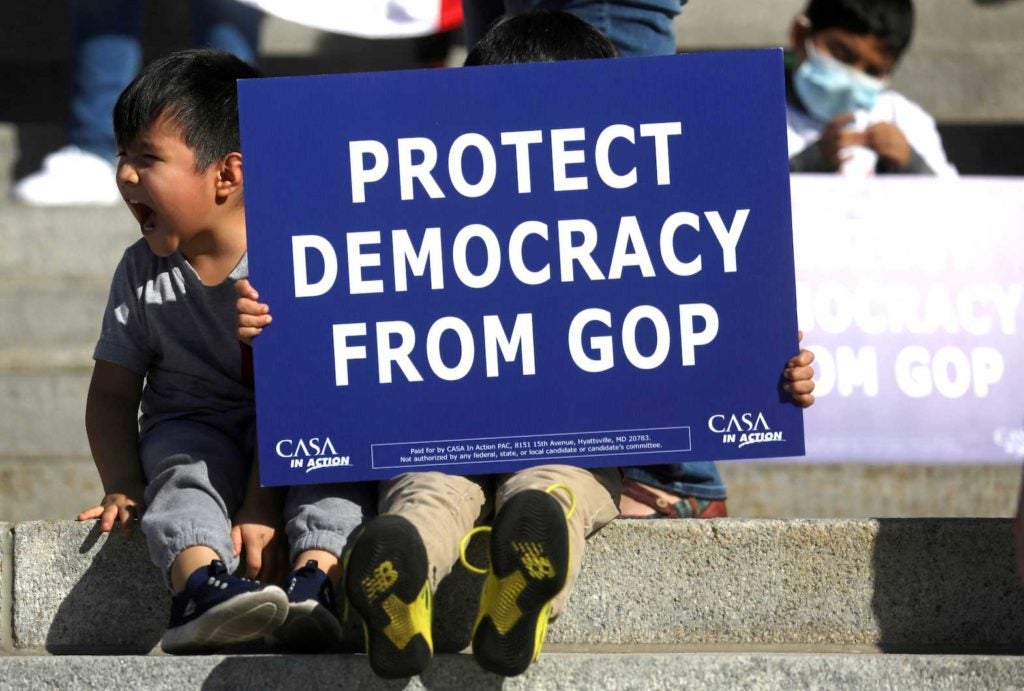 Young supporters of Democratic candidate Joe Biden sit on the steps as supporters of U.S. President Donald Trump rally nearby outside of the State Capitol building after news media declared Joe Biden to be the winner of the 2020 U.S. presidential election, in Harrisburg, Pennsylvania, U.S., November 7, 2020. REUTERS/Leah Millis/File Photo

Here is an explanation of why Trump, who has made unsubstantiated claims of widespread voter fraud, is running out of time to contest Democratic President-elect Joe Biden’s victory in the Nov. 3 election.

WHAT IS “SAFE HARBOR’ DAY?

“Safe harbor” day is a deadline, set by a U.S. law from 1887, for states to certify the results of the presidential election. Meeting the deadline is not mandatory but it provides assurance that a state’s results will not be second-guessed by Congress.

The safe harbor date falls six days before the meeting of the Electoral College, in which slates of “electors” formally select the presidential nominee who won the popular vote in their home states. A candidate needs at least 270 electoral votes to capture the presidency. Biden has amassed 306 electoral votes to Trump’s 232.

This year, the safe harbor date falls on Dec. 8.

Once that date passes, Trump can still press on with lawsuits seeking to overturn Biden’s victory.

But the legal campaign becomes even more difficult, since judges will likely say it is too late to overturn the results.

WHY DID CONGRESS CREATE THE “SAFE HARBOR” DEADLINE?

The safe harbor framework is laid out in the Electoral Count Act (ECA), passed in response to the 1876 presidential election. Results in multiple states were disputed that year, leading Congress to create an Electoral Commission, whose choice of Republican nominee Rutherford B. Hayes was only ratified by lawmakers after protracted political warfare.

Safe harbor day gives states an incentive to resolve any disputes about the winner “earlier rather than later,” said Justin Levitt, an election law scholar at Loyola Law School in Los Angeles.

Levitt said the safe harbor framework was meant to prevent a scenario in which two different election results are submitted from the same state.

Generally, a state’s governor certifies a slate of electors for the candidate that won the popular vote. In states with Democratic governors and Republican-controlled legislatures, it is possible that the legislature could send its own slate of electors, creating “dueling slates of electors.”

Under the ECA, Congress would be bound to recognize electors certified by the governor if that happens before the safe harbor date.

WILL STATES MEET THE DEADLINE THIS YEAR?

Yes. As of Monday night, 47 states and the District of Columbia had already certified their results. Those states give Biden the electoral votes he needs to win the presidency.

The remaining states — Colorado, Hawaii and New Jersey — are expected to certify before the Dec. 14 meeting of the Electoral College. Trump has not contested Biden’s wins in those states.

WHAT OTHER DEADLINES DOES TRUMP FACE?

The 538 electors in the Electoral College will meet in their respective states on Dec. 14.

Stung by a series of court defeats, the Trump team has rested its hopes on getting Republican-controlled legislatures in battleground states won by Biden to set aside the results and declare Trump the winner.

That argument loses force once electors cast their votes.

Congress will officially tally the electoral votes during a special joint session on Jan. 6.

Biden is expected to be sworn in at noon on Jan. 20, a date known as Inauguration Day that is set in the Constitution.