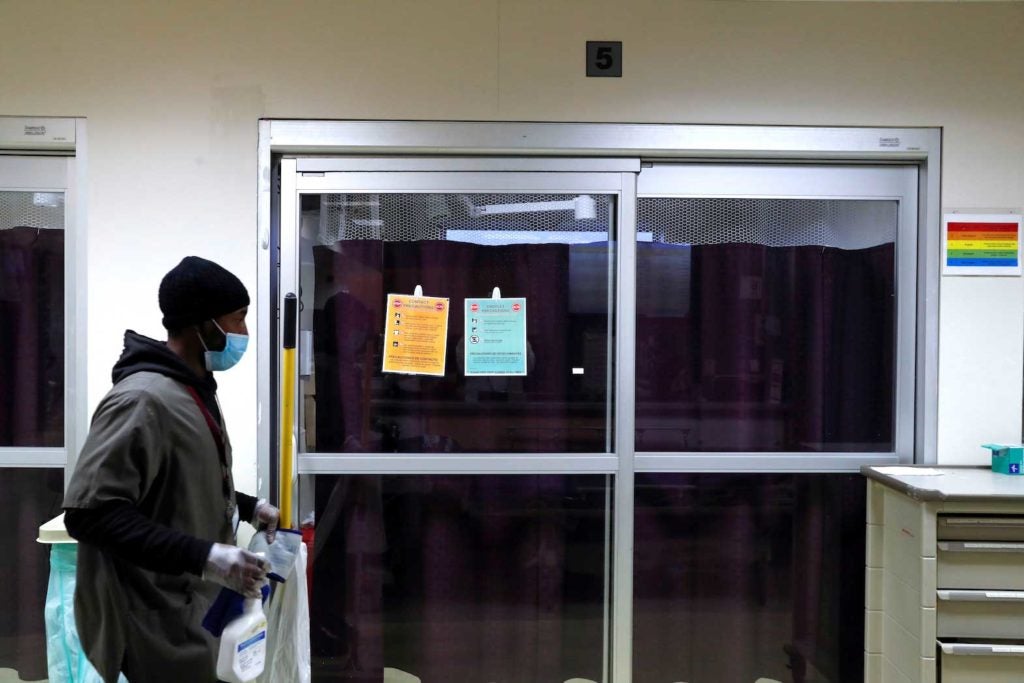 A housekeeper walks by the isolation room of a coronavirus disease (COVID-19) positive patient inside the emergency room bed at Roseland Community Hospital on the South Side of Chicago, Illinois, U.S., December 2, 2020. REUTERS/Shannon Stapleton/File Photo

WASHINGTON – U.S. deaths from the coronavirus pandemic have surged past 2,000 for two days in a row as the most dangerous season of the year approached, taxing an overwhelmed healthcare system with U.S. political leadership in disarray.

The toll from COVID-19 reached its second-highest level ever on Wednesday with 2,811 lives lost, according to a Reuters tally of official data, one short of the record from April 15.

The sobering data came as the head of the U.S. Centers for Disease Control and Prevention on Wednesday warned that December, January and February were likely to be “the most difficult time in the public health history of this nation.”

CDC Director Dr. Robert Redfield told an event hosted by the U.S. Chamber of Commerce that the United States could start losing around 3,000 people – roughly the number that died in the attacks of Sept. 11, 2001 – each day over the next two months.

“The mortality concerns are real and I do think unfortunately before we see February, we could be close to 450,000 Americans that have died from this virus,” Redfield said. The U.S. death toll since the start of the pandemic stands at around 273,000.

Meanwhile, the administration of outgoing President Donald Trump has yet to articulate an effective strategy to contain the virus beyond promoting the development of a vaccine, which could be rolled out later this month but faces an uphill battle amid a skeptical public and logistical challenges.

The Republican president’s few public appearances recently had been dedicated to efforts to overturn the results of the Nov. 3 election won by Democratic President-elect Joe Biden, who will assume office on Jan. 20.

Maryland Governor Larry Hogan, a Republican, said he had been concerned about the transition between the Trump and Biden administrations, but he had grown more hopeful that the federal government response would not lapse.

“We’re in the middle of the worst battle of this war, and the hand-off has got to be smooth. We’ve got to work together. There’s got to be no politics in this virus,” he told ABC News’ “Good Morning America” program.

Hogan echoed Redfield’s warning, citing dark days ahead and noting even when vaccines are approved, there initially won’t be enough to even cover all of his state’s healthcare workers.

“The worst part of this virus is coming in the weeks and maybe the month or two to come. And we’re not going to have enough for everybody, so we’re just asking for patience,” Hogan said.

Hospitals are filling up with COVID-19 patients, reducing care for people needing treatment for other ailments. Redfield said 90% of U.S. hospitals were in areas designated as coronavirus “hot zones.”

“There’s no end in sight because there’s so much community spread,” Adalja said, warning that the pandemic could force hospital closures.

U.S. Presidents Barack Obama, George W. Bush and Bill Clinton have volunteered to get their COVID-19 jabs on television to help demonstrate their safety, CNN reported, citing press aides to Bush and Clinton and an Obama interview on Sirius XM radio.

“I may end up taking it on TV or having it filmed, just so that people know that I trust this science,” Obama said.