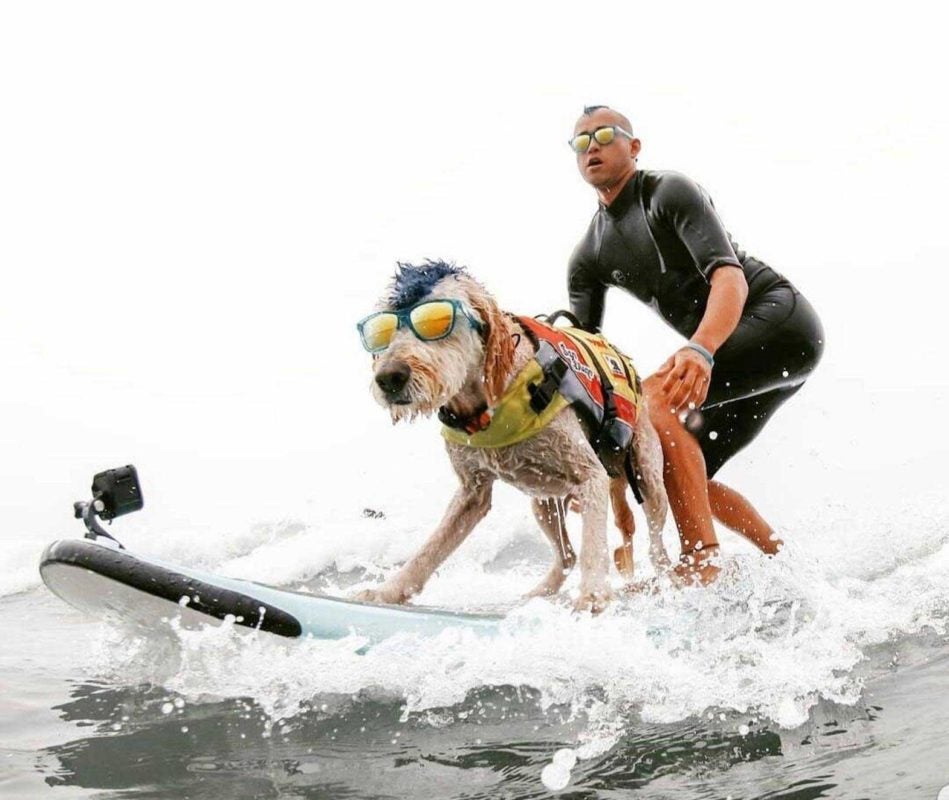 Filipino American surfing newbie Kioni Gallahue and his dog, a Goldendoodle named Derby, are featured in the reality television show “The Pack” at Amazon Prime.

The streaming service’s reality show is a contest series similar to “Amazing Race” but for human-dog duos.

Gallahue, son of a Filipino mother and a white father was a bartender in Atlanta, Georgia before moving to San Diego, California.  He was quoted by StateJournal.com; ‘The Gallahues are from Frankfort. He met my mom when he was in Hawaii with the Army. When they moved back, they gave us all Hawaiian names.”

His father passed away in 2007, but his mother, Tess, still lives on a farm near Switzer, Kentucky. Gallahue decided to take up surfing in his new hometown.

While he was learning to surf, his dog, Derby, kept swimming out to him. He finally decided to put Derby on the board and push it. The dog rode the surf all the way to the beach. “I was proud, but I was also pissed off because I was trying to learn how to surf and he just beat me to it,” Gallahue told State Journal.

The duo started joining local dog-surfing tournaments and winning, just a few months after taking up surfing. Gallahue went on Instagram (@Derbycalifornia) for his dog, started calling himself “Kentucky” and to style both of their hair-dos in eye-catching blue mohawk. The executives from Amazon Prime took notice.

“Truth be told, Kentucky and Derby are the same living creature,” Jay Bienstock, one of the show’s three executive producers, told the San Diego Union-Tribune. “Their bond was solid, and you could see that they get a lot of happiness from one another. The fact that they dress alike and have the same hair-do was a bonus. And then there’s their names. You just can’t write this stuff.”

“The Pack“ was taped last year and pits human-dog duos against one another to complete several challenges that require close cooperation and discipline. It began streaming on Nov. 20. Gallahue said that he’s working on a “Derby California”-branded hoodie — for dog and human — as well as a children’s book and cartoon.