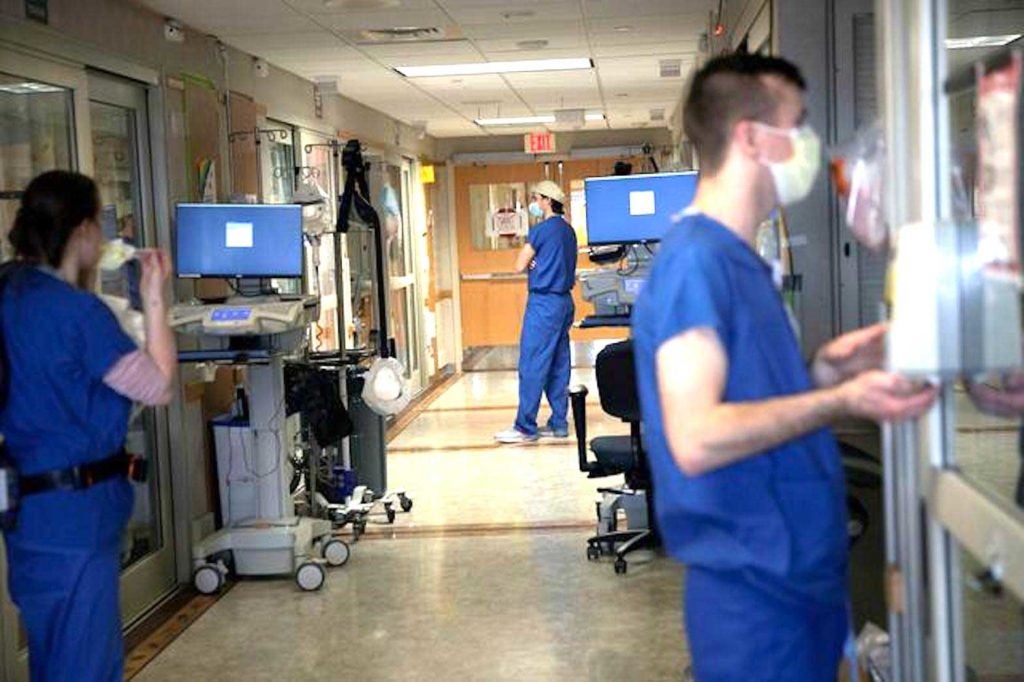 For Christina Nester, the pandemic lull in Massachusetts lasted about three months through summer into early fall. In late June, St. Vincent Hospital had resumed elective surgeries, and the unit the 48-year-old nurse works on switched back from taking care of only COVID-19 patients to its pre-pandemic roster of patients recovering from gallbladder operations, mastectomies and other surgeries.

That is, until October, when patients with coronavirus infections began to reappear on the unit and, with them, the fear of many more to come. “It’s paralyzing, I’m not going to lie,” said Nester, who’s worked at the Worcester hospital for nearly two decades. “My little clan of nurses that I work with, we panicked when it started to uptick here.”

Adding to that stress is that nurses are caught betwixt caring for the bedside needs of their patients and implementing policies set by others, such as physician-ordered treatment plans and strict hospital rules to ward off the coronavirus. The push-pull of those forces, amid a fight against a deadly disease, is straining this vital backbone of health providers nationwide, and that could accumulate to unstainable levels if the virus’s surge is not contained this winter, advocates and researchers warn.

Nurses spend the most sustained time with a patient of any clinician, and these days patients are often incredibly fearful and isolated, said Cynda Rushton, a registered nurse and bioethicist at Johns Hopkins University in Baltimore.

“They have become, in some ways, a kind of emotional surrogate for family members who can’t be there, to support and advise and offer a human touch,” Rushton said. “They have witnessed incredible amounts of suffering and death. That, I think, also weighs really heavily on nurses.”

A study published this fall in the journal General Hospital Psychiatry found that 64% of clinicians working as nurses, nurse practitioners or physician assistants at a New York City hospital screened positively for acute distress, 53% for depressive symptoms and 40% for anxiety — all higher rates than found among physicians screened.

Researchers are concerned that nurses working in a rapidly changing crisis like the pandemic — with problems ranging from staff shortages that curtail their time with patients to enforcing visitation policies that upset families — can develop a psychological response called “moral injury.” That injury occurs, they say, when nurses feel stymied by their inability to provide the level of care they believe patients require.

In parts of the country over the summer, nurses got some mental health respite when cases declined, Dean said.

“Not enough to really process it all,” she said. “I think that’s a process that will take several years. And it’s probably going to be

Before the pandemic hit her Massachusetts hospital “like a forest fire” in March, Nester had rarely seen a patient die, other than someone in the final days of a disease like cancer.

Suddenly she was involved with frequent transfers of patients to the intensive care unit when they couldn’t breathe. She recounts stories, imprinted on her memory: The woman in her 80s who didn’t even seem ill on the day she was hospitalized, who Nester helped transport to the morgue less than a week later. The husband and wife who were sick in the intensive care unit, while the adult daughter fought the virus on Nester’s unit.

“Then both parents died, and the daughter died,” Nester said. “There’s not really words for it.”

During these gut-wrenching shifts, nurses can sometimes become separated from their emotional support system — one another, said Rushton, who has written a book about preventing moral injury among health care providers. To better handle the influx, some nurses who typically work in noncritical care areas have been moved to care for seriously ill patients. That forces them to not only adjust to a new type of nursing, but also disrupts an often-well-honed working rhythm and camaraderie with their regular nursing co-workers, she said.

At St. Vincent Hospital, the nurses on Nester’s unit were told one March day that the primarily postsurgical unit was being converted to a COVID unit. Nester tried to squelch fears for her own safety while comforting her COVID-19 patients, who were often elderly, terrified and sometimes hard of hearing, making it difficult to communicate through layers of masks.

“You’re trying to yell through all of these barriers and try to show them with your eyes that you’re here and you’re not going to leave them and will take care of them,” she said. “But yet you’re panicking inside completely that you’re going to get this disease and you’re going to be the one in the bed or a family member that you love, take it home to them.”

When asked if hospital leaders had seen signs of strain among the nursing staff or were concerned about their resilience headed into the winter months, a St. Vincent spokesperson wrote in a brief statement that during the pandemic “we have prioritized the safety and well-being of our staff, and we remain focused on that.”

Nationally, the viral risk to clinicians has been well documented. From March 1 through May 31, 6% of adults hospitalized were health care workers, one-third of them in nursing-related occupations, according to data published last month by the Centers for Disease Control and Prevention.

As cases mount in the winter months, moral injury researcher Dean said, “nurses are going to do the calculation and say, ‘This risk isn’t worth it.’”

Juliano Innocenti, a traveling nurse working in the San Francisco area, decided to take off for a few months and will focus on wrapping up his nurse practitioner degree instead. Since April, he’s been seeing a therapist “to navigate my powerlessness in all of this.”

Innocenti, 41, has not been on the front lines in a hospital battling COVID-19, but he still feels the stress because he has been treating the public at an outpatient dialysis clinic and a psychiatric hospital and seen administrative problems generated by the crisis. He pointed to issues such as inadequate personal protective equipment.

Innocenti said he was concerned about “the lack of planning and just blatant disregard for the basic safety of patients and staff.” Profit motives too often drive decisions, he suggested. “That’s what I’m taking a break from.”

As cases surge again, hospital leaders need to think bigger than employee assistance programs to backstop their already depleted ranks of nurses, Dean said. Along with plenty of protective equipment, that includes helping them with everything from groceries to transportation, she said. Overstaff a bit, she suggested, so nurses can take a day off when they hit an emotional cliff.

The American Nurses Association, the American Association of Critical-Care Nurses (AACN) and several other nursing groups have compiled online resources with links to mental health programs as well as tips for getting through each pandemic workday.

Kiersten Henry, an AACN board member and nurse practitioner in the intensive care unit at MedStar Montgomery Medical Center in Olney, Maryland, said that the nurses and other clinicians there have started to gather for a quick huddle at the end of difficult shifts. Along with talking about what happened, they share several good things that also occurred that day.

“It doesn’t mean that you’re not taking it home with you,” Henry said, “but you’re actually verbally processing it to your peers.”

When cases reached their highest point of the spring in Massachusetts, Nester said there were some days she didn’t want to return.

“But you know that your friends are there,” she said. “And the only ones that really truly understand what’s going on are your co-workers. How can you leave them?”