Explainer: Can Trump’s lawyers be disciplined for making false claims? 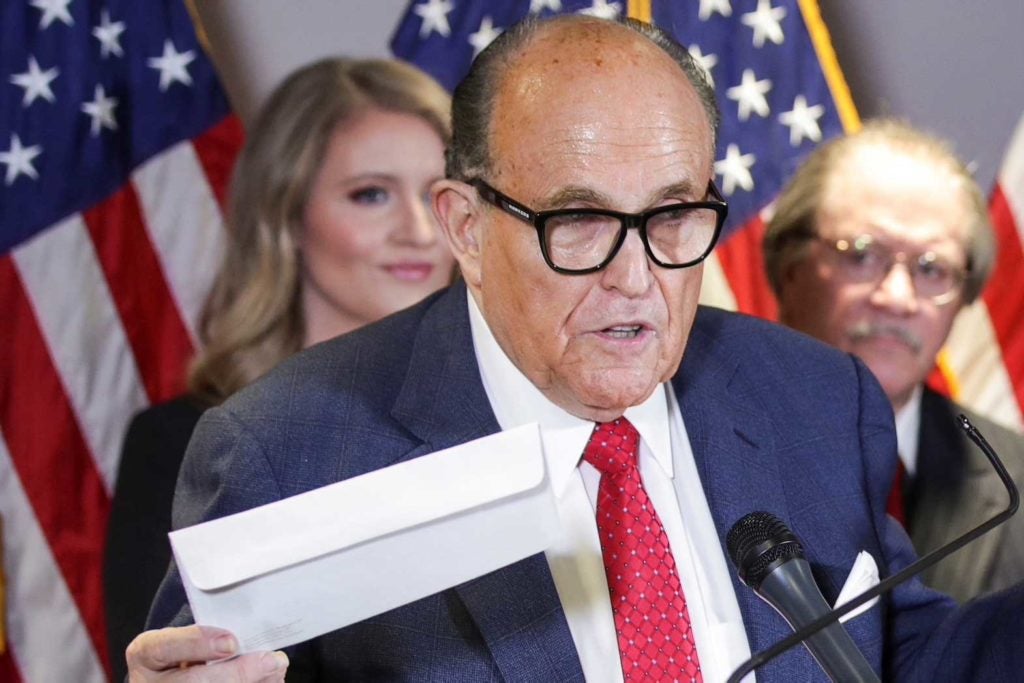 In the weeks since U.S. President Donald Trump lost the election, his lead lawyer Rudy Giuliani has repeatedly made baseless claims of widespread voter fraud and the campaign brought a flurry of lawsuits challenging the results, many of which were dismissed.

Representative Bill Pascrell, a Democrat, on Friday called for Giuliani and other members of the legal team to be stripped of their law licenses for bringing “frivolous” lawsuits and allegedly attempting to help Republican Trump steal the Nov. 3 vote from President-elect Joe Biden.

Here’s why Trump’s lawyers are very unlikely to face disbarment, suspension, or even lighter sanctions such as a fine.

All 50 states and the District of Columbia have legal ethics rules for lawyers that are derived from standards published by the American Bar Association.

One ABA rule says that lawyers should only assert a claim in court if “there is a basis in law and fact for doing so that is not frivolous.”

Separately, there are rules prohibiting lawyers from making false statements to third parties and engaging in deceitful conduct.

Judges can punish lawyers who violate ethics rules in a particular case by ordering them to pay the winning party’s legal fees.

Judges can also impose milder sanctions such as striking a misleading document from the court record.

These case-specific punishments are sometimes known as “Rule 11 sanctions” in federal court.

These bodies can suspend a lawyer or revoke his or her license.

‘OFFICERS OF THE COURT’

Giuliani, a former federal prosecutor and politician, made unsubstantiated claims in press conferences and media appearances about electoral fraud.

During a Nov. 17 court hearing, he initially told a judge in Pennsylvania that the election had been marred by fraud.

But under questioning by Judge Matthew Brann, Giuliani backed away from this unproven claim, acknowledging that “this is not a fraud case.”

Other members of the Trump legal team have generally made narrower allegations in court, where they have presented technical arguments about why ballots should not be counted.

Viviane Scott, a lawyer at Frankfurt Kurnit Klein & Selz in New York, said there is a reason for this dissonance between what the campaign says in and out of courtrooms.

“We, as lawyers, are officers of the court,” said Scott. “We’re under an obligation make statements that have a basis in truth.”

In one instance, a Trump lawyer has been accused of crossing the line.

Attorneys for the city of Detroit asked a judge to reprimand Trump’s campaign for spreading “disinformation” by claiming in a court filing that Wayne County, Michigan officials “declined to certify the results of the presidential election.”

Republican officials initially refused to certify the results, but reversed themselves after a public outcry.

Lawyers for the city of Detroit asked a judge to strike the document in question from the record as a sanction. The judge has not yet ruled on the request.

Mark “Thor” Hearne, the campaign lawyer who submitted the document, told Reuters the sanctions request was meritless and an attempt to score political points.

Rules governing attorney conduct apply both inside and out of the courtroom.

“Lawyers definitely have a lot more leeway in press conferences, but they still cannot engage in deceit in their statements,” said Keith Swisher, an ethics law professor at the University of Arizona.

On Twitter and in media appearances, Giuliani and attorney Sidney Powell appeared to have run afoul of rules barring them from making dishonest statements, said Brian Faughnan, a lawyer and ethics specialist in Tennessee.

The Trump campaign has since said that Powell is no longer representing it.

Faughnan said Giuliani acted unethically by tweeting on Nov. 22 that there were “PHANTOM VOTERS” in the Detroit area.

That tweet appeared to reference a sworn statement by a cybersecurity analyst, submitted in court, that had a major error: it confused data from Minnesota with data from Michigan.

Two days previously, the lawyer who filed the affidavit, Lin Wood, conceded that it was mistaken and needed to be corrected.

Giuliani either knew his tweet was false, or reasonably should have known it was false, Faughnan said.

“By the time he tweeted that, the screw-up had been publicly discussed,” Faughnan said.

Faughnan said he had similar concerns about Powell’s baseless claim at a Nov. 19 press conference that voter machines had been hacked and millions of votes switched.

Giuliani and Powell did not respond to requests for comment.

Despite these apparent ethical lapses, Faughnan said he did not expect state grievance committees to take action against Giuliani and Powell.

Faughnan said investigators have limited resources, and will focus on more straightforward violations such as lawyers who steal from clients.

Faughnan said investigators would also be wary of disciplining lawyers when its about politics.

“When it is a very politically charged case, you know the first line of defense is going to be ‘you are only doing this to us because of our politics,'” said Faughnan.

Sanctions imposed by judges are more possible, Faughnan said, but still unlikely. Sanctions are typically requested by opposing counsel, who may decide the fight is not worth the time and energy, he said.

“Is a court going to take it upon itself to issue any sort of sanction in these circumstances? They might but it seems unlikely,” he said.