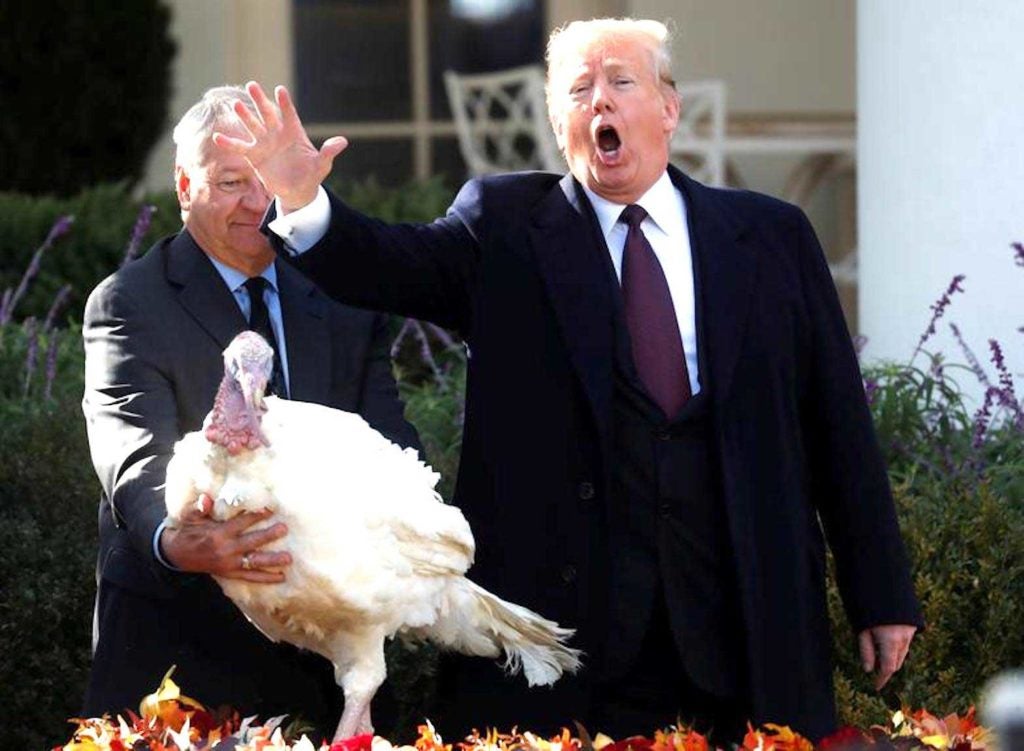 Thanksgiving turkey is on the left, REUTERS

Here’s something to be thankful for. Unlike the general population which was more like 51% to 47% for Biden, Filipino Americans were much more decisive. There was no doubt Filipinos voted for Biden, by  60% to 48%. Trump was a definitive loser. Biden won our community with an undeniable mandate.

To wait any longer for a Biden transition to begin after this week is undemocratic. With few options left,  Donald Trump had to acknowledge the exit sign.

After nearly a month, reports say someone on his staff, plus other top Republicans finally appealed to his vanity and convinced him that he was doing more harm to himself than to our democracy.

Always putting himself first, making Donald Trump great,  right? It wasn’t until his own actions looked more and more anti-American and authoritarian that Trump seemed to care about how it made his brand look. Dictatorial?

It was that, plus realizing he never had to say the word “concession” ever.  Concession is something you hire people to run at Coney Island. It’s not what a Trump loser does.

And so, now we are to believe Trump finally gets it. This is how a president acts when he loses. He accepts the fact that he’ll be a former president soon. In golf parlance, Trump at least understands it’s time to stop playing slow and  move his golf cart so that the Biden party can play through.

The big obstacle to the transition had been the reluctance of the administrator of the General Services Administration to recognize the Biden victory.  Without Emily Murphy’s decision to do her job, nothing could be done officially with taxpayer funds. Her stalling allowed for Trump and Giuliani to pick apart the election and sow more distrust in our democracy than a Russian hack.

But once many of the key Trump’s legal challenges failed, and Georgia and Michigan were certified for Biden, there was no good reason to delay. Murphy allowed for the transition as is her duty.

The gall kicked in when Trump took credit soon after in a tweet,  still claiming a kind of victory (“I believe we will prevail.”) But definitely signaling to his more than 70 million supporters he was doing the right thing. “In the best interest of our Country, I am recommending that Emily and her team do what needs to be done with regard to initial protocol, and I have told my team to do the same.”

We’ve moved from the bald faced lie to the fig-leaf lie, as if Trump was the big man who orchestrated it all.  What’s the truth? In this double-speak era, you take credit or find cover. Or both.

Biden supporters are just glad the transition can begin. Trump is just happy his supporters want him to fight on.  The two Americas are still at odds, though somehow it feels like progress.

So we’re in transition. And we still have to worry what Trump can still do to muck things up. We can at least be thankful for this: The annual White House presidential turkey pardon is on despite our sour puss/sore loser president.

The real good news is Donald Trump is not pardoning himself.

Or Paul Manafort. Or Michael Flynn. Or any of his convicted former campaign and presidential advisors. Though maybe he’s practicing what he’d do for his buddies,  as well as a reported “pre-emptive self-pardon,” essentially a “get-out-of-jail-free card” for himself.

For the moment, the White House is just concentrating on actual turkeys.

Their names, Corn and Cobb, are in keeping with themes of pardons past, where  bird duos were named Bread and Butter, Peas and Carrots.

What about our Asian American Thanksgiving tables? Why not Tofu and Rice.  Noodles and Soy Sauce. Maybe throw in a vegan name like Seitan. Or Gluten Puff.

No, the White House couldn’t do something really fun and diverse like that.

But in keeping with the electoral travesty gripping the nation, Team Trump has come up with something new– a Turkey Poll, which is more like an election. An election? Will it take a month to count the results? And what about Michigan, Pennsylvania and Georgia?  F

For this you can actually vote for Corn or Cobb before the event on the White House web site.

Here’s the catch. Both birds get to live, no matter who wins, both Corn and Cobb are going back to Iowa to live out their days in a sanctuary.

In other words, it’s a rigged election. Will Trump demand a recount?  That would be silly. Not unless Rudy Giuliani finds some dead people voting online somewhere for Corn. Or Cobb. But what about their teeth?

There is a serious side here, however.

Nearly 46 million will be killed this year for Thanksgiving, with another 22 million at the Christmas holiday. All told 245 million turkeys are killed for food in the U.S. each year.

After living their lives in cramped, unsanitary and borderline inhumane conditions, they are all killed in factory farms and served up for their cholesterol and tryptophan value.

Forty-six million turkeys. No pardons for them.

Maybe that’s a good thing that we’re all staying home, staying local, not going loco, not travelling nor gathering in large groups to eat a Thanksgiving meal that shouldn’t be centered around a dead animal.

Not with the virus cases spiking throughout the nation.  So mask up. Be smart. Stay safe. We have to be conservative here, not risk takers, because the cost is your health and possibly your life. Celebrate, sure. America is finally in transition. Democracy will be normal again. And the man who never should have been president will be playing golf in perpetuity.

There’s plenty for which to be thankful, really. Make sure your around for it all.

Emil Guillermo is a journalist, commentator and wittic. He writes a column for the North American Bureau of Inquirer.net.  See his podcasts at thewittic.com. Twitter @emilamok