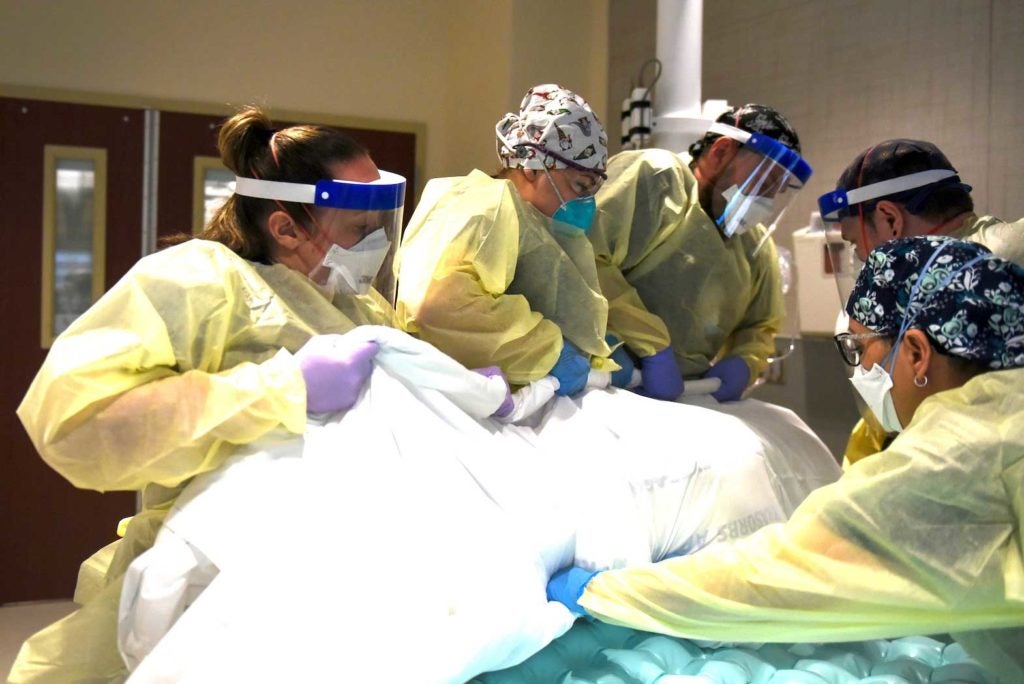 Healthcare personnel rotate a patient who is on a ventilator inside a room for patients with the coronavirus disease (COVID-19) at a hospital in Hutchinson, Kansas, U.S., November 20, 2020. REUTERS/Callaghan O’Hare

The vital signs of the 30-year-old COVID-19 victim were crashing, and Kearny County Hospital in rural Lakin, Kansas, just wasn’t equipped to handle the case. Miller, Kearny’s chief medical officer – who doubles as the county health officer – called around to larger hospitals in search of an ICU bed. With coronavirus cases soaring throughout Kansas, he said, he couldn’t find a single one.

By the time a bed opened elsewhere the following day, the young man was near death. For a full 45 minutes, Miller and his staff performed chest compressions in a desperate attempt to save him.

Somehow, Miller said, the patient regained a pulse, and was dispatched in an ambulance to the larger facility about 25 miles away. Miller then prayed with the family, whom he knew “very well” from Lakin, a town of just a few thousand people.

“It’s truly a miracle he has survived,” Miller said.

After pounding big U.S. cities in the spring, COVID-19 now has engulfed rural and small-town America, seeming to seep into the country’s every nook and cranny. According to Reuters’ interviews with more than a dozen medical care providers and public health officials in the nation’s heartland, many hospitals are severely lacking in beds, equipment and – most critically – clinical staff, including specialists and nurses.

COVID-19 cases and hospitalizations are spiking nationally. But the Midwest – encompassing a dozen states between Ohio and the Dakotas – has been especially brutalized. Reported case rates are more than double that of any other region in the United States, according to the COVID Tracking Project, a volunteer-run data provider. From mid-June to mid-November, reported cases in the Midwest rose more than twentyfold.

For the week ending November 19, North Dakota reported an average of 1,769 daily new cases per 1 million residents, according to the tracking project. South Dakota recorded nearly 1,500 per million residents, Wisconsin and Nebraska around 1,200, and Kansas nearly 1,000. Even in New York’s worst week in April – with business closed and panic gripping the public – the state never averaged more than 500 new cases per million people. California never topped 253.

Hospital officials in the Midwest told Reuters they’re at capacity or nearly so. Most have tried to increase availability by repurposing wings or cramming multiple patients in a single room, and by asking staffers to work longer hours and more frequent shifts.

Facilities like Kearny, known as “critical access” hospitals, weren’t made for this. Often sparsely funded, they mainly provide basic or emergency care to residents who live long distances away from bigger medical centers. Now, “we have to plan on being able to care for whomever comes in,” said Miller, whose specialty is family medicine.

As cases spike in many conservative states and counties, medical workers say they often face a challenge just in convincing patients and local leaders that the disease should be taken seriously and isn’t a Democrat-perpetuated hoax.

Such viewpoints flow from the top. President Donald Trump often has held shoulder-to-shoulder rallies in the Midwest and elsewhere and treated masks as a matter of personal choice. Although Trump was not re-elected, about two months remain in his tenure, with little sign of change in his coronavirus strategy, even as the crisis grows.

The White House press office did not respond to a request for comment.

Some medical officials and hospital staffers find it hard to reconcile laissez-faire policies with the sickness and suffering they see.

“There’s a disconnect in the community, where we’re seeing people at bars and restaurants, or planning Thanksgiving dinners,” said Dr. Kelly Cawcutt, an infectious disease doctor at the University of Nebraska Medical Center. As health workers, she said, “we feel kind of dejected.”

All told, COVID-19 has claimed more than 256,000 lives in the United States. The virus’ mortality rate has dropped as doctors have learned more about the disease, and vaccines developed by Moderna Inc, Pfizer Inc and others could hit the market early next year. In the meantime, smaller hospitals say they are employing the same drugs – such as remdesivir and dexamethasone – that big-city facilities do, but don’t have the same access to ICU equipment or specialized expertise.

“I don’t think the worst is here yet,” Miller said.

Shortages of staff, rather than beds, are the biggest single problem in many hospitals, the health officials said. “Just because you can take a cot and put it in a room doesn’t mean you have the appropriate nursing staff to care for a patient,” said Dr. Anthony Hericks, director of critical care with Avera Health in Sioux Falls, South Dakota.

Nurses must observe COVID-19 patients even more closely than others, because of the potential for rapid decline, said Melisa Hazell, a critical care nurse at Hutchinson Regional Medical Center, in Hutchinson, Kansas. She said she recently recovered from COVID-19 herself, returning to work as soon as she was certain she wouldn’t spread the virus.

“I was off for 12 days,” she said. “Was I mentally and physically ready to go back to work? No, but my teammates needed me.”

Remote hospitals don’t keep a full staff on board in the best of times. They hire traveling nurses as the number of patients surge. Now it’s tough to find any available.

Aya Health, a San Diego, California-based nurse staffing agency, was posting around 14,000 open positions in the spring, said April Hansen, an executive vice president. That number has now doubled, she said, and pay rates have shot up with demand.

Mary Helland, a chief nursing officer with CommonSpirit Health in North Dakota, said she has put in requests for traveling nurses for the 11 critical access hospitals she oversees in North Dakota and Minnesota. But “bigger hospitals are using them all up,” she said.

At Hutchinson Regional, which has 190 beds, Chief Nursing Officer Amanda Hullet has begun taking floor shifts, even though she had long since graduated to a desk job.

The physical and emotional fatigue is constant, Hullet said, and even harder when the patient is a close friend or colleague.

Hullet recalled the recent deaths of local couple Bill and Judy Mason, just weeks apart, from COVID-19. Judy had taught dance in town for decades, Hullet said, and her students included some of the hospital’s employees.

Holly Thomas, 37, who is married to the couple’s grandson, said Judy was the “glue” that kept the family together.

Referring to COVID-19 in the Midwest, Thomas said “we sat by idly from March to August not seeing a whole lot.” Now she hears of about two deaths a day. “My PE teacher from high school and his wife died within 12 hours of each other, too,” she said.

Hazell, the Hutchinson Regional nurse, encountered a patient who was a former bowling buddy. “He’s just fantastic,” she said. “Great heart, always willing to sit down and share a story or two.”

He’s on a ventilator now, not doing well. “Over next week or two, there’s going to be some tough decisions,” she said.

Medical workers told Reuters that denial about the disease is frustratingly common among public officials, community members and even patients.

One patient at SSM Health in Janesville, Wisconsin, refused to believe COVID-19 was a serious threat, even as it consumed him, said Dr. Alison Schwartz, an infectious disease physician there. When he died, “the family did not want to admit this patient had died of COVID, because they didn’t believe COVID kills people,” she said.

Some Midwestern states and local jurisdictions been loath to mandate masks or social distancing.

Nebraska Governor Pete Ricketts, a Republican, went so far as to say he would not allow municipalities to impose mask mandates.

Ricketts’ office declined to comment, but the governor said in a Nov. 13 press conference, “I’m against broad-based mandates in favor of educating people about how to use masks.”

South Dakota Governor Kristi Noem has refused to mandate mask-wearing, and has not imposed restrictions on businesses or public gatherings, saying she would leave such matters to “individual responsibility.” In July, she hosted an Independence Day celebration with Trump at Mt. Rushmore, where the crowd was close together and many attendees were maskless.

Doctors say trying to change such behavior can feel like a hopeless task. “Everyone [is] continuing to go about their lives,” Schwartz said, but “we sort of feel like we’re drowning.”