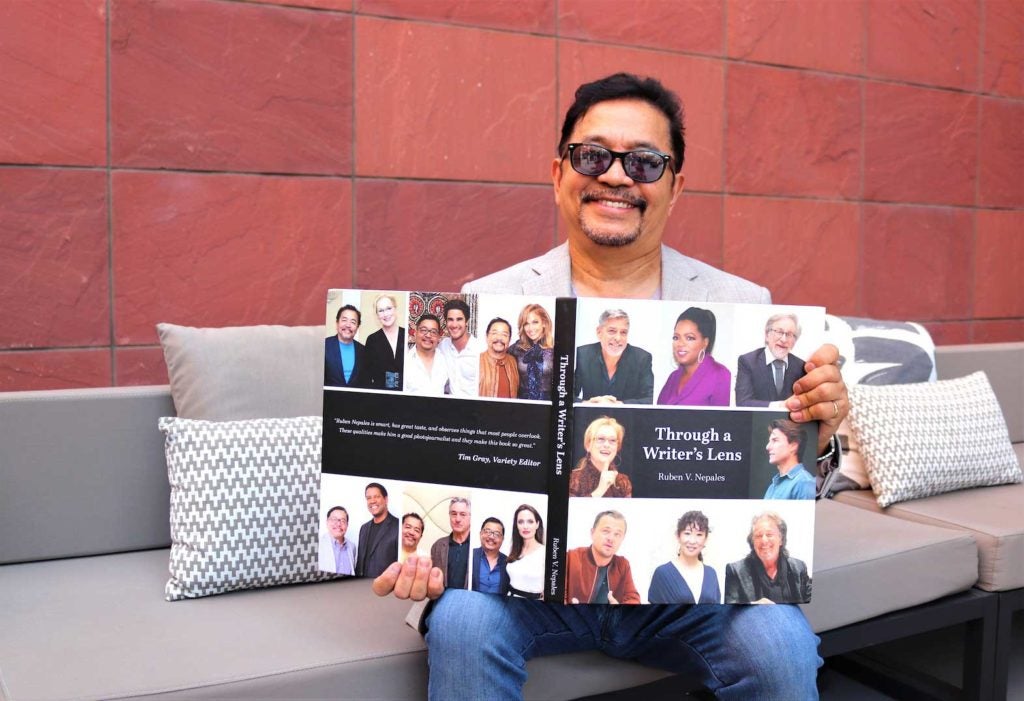 Nepales is the first Filipino to be elected to membership in the Hollywood Foreign Press Association (HFPA), the association of international journalists which votes on and presents the Golden Globe Awards. CONTRIBUTED

LOS ANGELES – Award-winning Hollywood photojournalist Ruben V. Nepales has released “Through a Writer’s Lens,” a stunning coffee table book of more than 1,000 photos of stars that he took in almost two decades.

“Through a Writer’s Lens,” a 260-page hardbound compilation of Nepales’ often candid, refreshing snapshots of the Hollywood stars he has interviewed, is a beautiful 12” x 14” book that is bound to be a collector’s item.

Variety editor Tim Gray praised “Through a Writer’s Lens”: “Ruben Nepales is smart, has great taste, and observes things that most people overlook. These qualities make him a good photojournalist and they make this book so great.”

Rito Asilo, entertainment editor of the Philippine Daily Inquirer, where Nepales’ popular column, “Only IN Hollywood,” ran for 15 years, also hailed “Through a Writer’s Lens”: “It is with great pleasure that I welcome Ruben’s coffee table book, a visual tome of sorts, featuring stellar Hollywood talents he interviewed over the years, from Meryl Streep and Tom Cruise to Al Pacino and Steven Spielberg…If you read his interviews often enough (as you should), you’ll soon realize that one is truly made more satisfying by the other. Suffice it to say that his words go hand in hand with his photographs.”

Bessie Badilla, the book’s publisher, cited why she encouraged Nepales to share his photos of stars, many of which appeared in his column. But majority of the photos featured in the special book are published for the first time.

“When I saw Ruben’s photos for his column on the Philippine Daily Inquirer, they made me want to read his latest column right away,” Badilla said. “His photos made me curious. They have the ability to make you want to ‘get to know’ more the celebrities that he features.”

The publisher added, “It was Ruben’s photo of Sarah Jessica Parker that got me thinking he has a special talent! It was the best photograph of Ms. Parker I’ve ever seen. Ruben has the eye for capturing his subject’s best angle and he also has perfect timing.

“During one of our dinners in New York with his wife Janet, I asked Ruben if I could publish a coffee table book of his photographs that he’s been taking for many years. I’m so happy he agreed because this collaboration was a joy to make and will be equally enjoyable to all the book’s readers.” 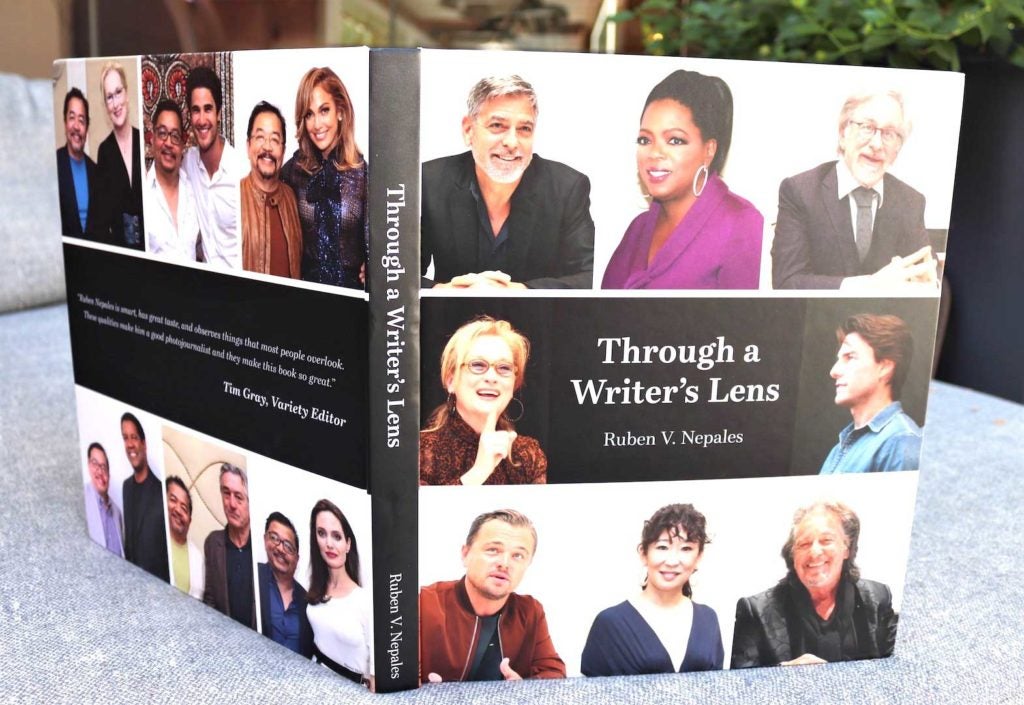 Each of the 200-plus top and beloved talents, from Angelina Jolie, Oprah Winfrey, Sandra Oh, Jennifer Lopez, Kristen Stewart, Darren Criss to Robert Pattinson, included in the tome has an interesting, memorable quote culled from the photojournalist’s columns of these stars. CONTRIBUTED

Each of the 200-plus top and beloved talents, from Angelina Jolie, Oprah Winfrey, Sandra Oh, Jennifer Lopez, Kristen Stewart, Darren Criss to Robert Pattinson, included in the tome has an interesting, memorable quote culled from the photojournalist’s columns of these stars. Some of the quotes were also culled from Nepales’ monthly Hollywood feature on Smile Magazine, Cebu Pacific Air’s inflight magazine.

Badilla also said, “ ‘Through a Writer’s Lens’ will give readers an intimate date with each of the more than 200 talents and celebrities featured in the book. Readers will enjoy many never-before-seen candid shots of their favorite stars while reading these stars’ quotes that give you personal insights on their lives, struggles, pain, fame, triumphs and loves.”

“Through a Writer’s Lens” is Nepales’ second book, following his 2012 book, “My Filipino Connection: The Philippines in Hollywood,” which won in the print journalism – book category of the Migration Advocacy and Media Awards presented by the Office of the President of the Philippines’ Commission on Filipinos Overseas.

Nepales is the first Filipino to be elected to membership in the Hollywood Foreign Press Association (HFPA), the association of international journalists which votes on and presents the Golden Globe Awards. Nepales served for many years as a board member of the HFPA, which is one of the biggest philanthropic organizations in Hollywood (it has donated more than $44 million in the past 31 years to entertainment-related charities, scholarships and grants).

In 2012, Nepales became the first Filipino to be elected as chairman of the board of the HFPA. In June 2019, the photojournalist was elected executive secretary of the HFPA. He was the managing editor of a special anniversary commemorative book, “Hollywood Foreign Press Association: A History (75 Years of the Golden Globe Awards).”

In August, Rappler, the Philippines’ leading news website, became the exciting new home of Nepales’ beloved column, “Only IN Hollywood.”

The University of Santo Tomas (Manila) alumnus also serves on the board of directors of the Filipino American Symphony Orchestra (FASO), the only Filipino symphony orchestra outside of the Philippines.