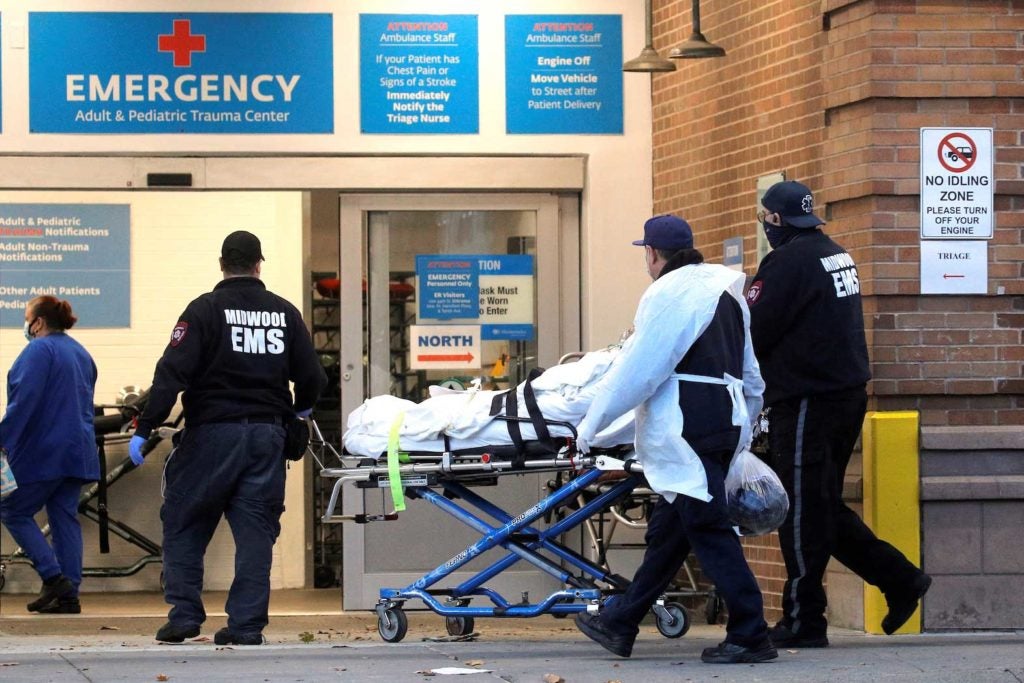 The extraordinary rebuke, weighing in on the White House post-election transition fray, came in an open letter from three leading healthcare organizations as state and local governments scrambled to fight the virus in the absence of a coordinated national strategy.

“Real-time data and information on the supply of therapeutics, testing supplies, personal protective equipment, ventilators, hospital bed capacity and workforce availability to plan for further deployment of the nation’s assets needs to be shared to save countless lives,” said the letter, signed by heads of the American Medical Association, the American Nurses Association and the American Hospitals Association.

The letter was published a day after Biden, the victor in the tumultuous Nov. 3 election that Trump has refused to concede, warned “more people may die” if the incumbent president keeps blocking a smooth succession to the next administration in January.

Dr. Vivek Murthy, co-chair of Biden’s COVID-19 taskforce, said Tuesday he and other medical advisers had been unable to discuss the pandemic with current administration officials, an obstacle that could compromise the U.S. response to the virus.

The soaring rate of new cases this fall has stricken even rural areas that had dodged the worst of the pandemic over the summer. Government officials in at least 17 states representing both ends of America’s political divide have issued sweeping new public health mandates this month. These range from stricter limits on social gatherings and non-essential businesses to new requirements for wearing masks in public places.

Dr. Anthony Fauci, the government’s top infectious disease specialist, said the country would be better served by a “uniform approach” to fighting the pandemic.

“We need some fundamental public health measures that everyone should be adhering to, not a disjointed, ‘One state says one thing, another state says another thing,'” Fauci said in a New York Times interview.

Health experts say greater social mixing and indoor gatherings during the holiday season, combined with colder weather, will accelerate the COVID-19 surge that has sent infections and hospitalizations to record levels in recent weeks.

Forty-one U.S. states have reported daily record increases in COVID-19 cases in November, 20 have registered new all-time highs in coronavirus-related deaths from day to day, and 26 have reported new peaks in hospitalizations, according to a Reuters tally of public health data.

Twenty-five states reported 10% of COVID-19 diagnostic tests coming back positive for the week ending on Sunday, Nov. 15. The World Health Organization considers a positivity rate above 5% to be concerning.

Illustrating the risks of large social gatherings, health officials this week linked a Nov. 7 wedding that drew some 300 guests to a private location near the town of Ritzville in eastern Washington state to at least 17 COVID-19 infections and two subsequent outbreaks.

In a sign of strains on hospital workers, over 700 nurses at St. Mary Medical Center in eastern Pennsylvania went on strike Tuesday to protest staffing levels they said were too thinly stretched to provide adequate patient care.

The two-day walkout was called after the hospital and the Pennsylvania Association of Staff Nurses and Allied Professionals deadlocked in talks over working conditions as rising COVID-19 admissions pushed the facility near capacity, the union said.

The governors of Ohio and Maryland on Tuesday became the latest to place curfews on bars and restaurants to reduce the virus’ spread this winter, while the prospect of a widely available vaccine is still months away.

“We’re not shutting down, we’re slowing down,” Mike DeWine of Ohio said in unveiling the 10 p.m.-to-5 a.m. curfew in his state. “We have to flatten this curve again and get this under control.”

A similar curfew ordered by Maryland Governor Larry Hogan was accompanied by new restrictions limiting indoor capacity of businesses and organizations to 50% of normal.

“We are in a war right now and the virus is winning,” Hogan told reporters.

The United States crossed 11 million total infections on Sunday, just eight days after reaching the 10 million mark. The Midwest remains the hardest-hit U.S. region during the latest wave of infections, reporting almost half-million cases in the week ending on Monday.

The number of coronavirus patients hospitalized in the United States climbed to a record of 73,140 on Monday, and hospitalizations have increased over 46% in past 14 days, according to a Reuters tally.

Several state officials also have urged citizens to exercise caution around the Thanksgiving holiday and not travel or socialize with extended family for the traditional indoor feast.

New Orleans Mayor LaToya Cantrell was even more forward-looking in her holiday warnings, announcing on Tuesday that the city’s Mardi Gras parades would be canceled in February.

“Experts are predicting a ‘winter spike’ in cases this winter in December and January – right when our carnival calendars get rolling,” Cantrell said on the city’s website.