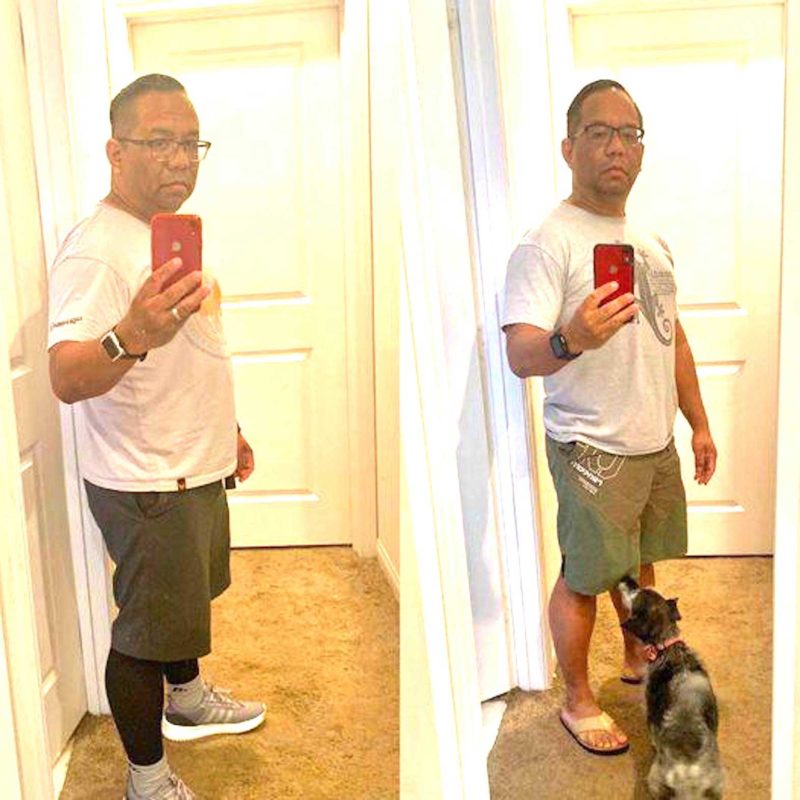 Jaycee Bagtas (left) before he started CrossFit and (right) after a few months in the program. CONTRIBUTED

“In my mind, I was an agile and strong 16-year-old. My body, however, was more of a feeble, decrepit 80-year-old sitting around waiting to cross the Golden bridge.”

That’s how Jaycee Bagtas, in his late 40s, describes himself before he started his journey to CrossFit. He was overweight. His depression made him turn to food binging. In October 2019, he was diagnosed as pre-Type 2 diabetic.

Getting fit with CrossFit

Getting back to his feet was difficult, partly due to the COVID-19 pandemic that has swept the world and crippled economies. Bagtas lost his job as the director of financial aid for the San Diego Culinary Institute, when it closed in December 2019. He has been doing freelance web development since.

Born in the Philippines, and raised in Japan and in San Diego, California, Bagtas’ father was in the US Navy. Early on, he knew discipline and hard work. There was no room for mediocrity or lame excuses. If his father would see him, he would be told to get in shape. And that’s what he did.

“I started CrossFit in February because I was diagnosed as pre-diabetic last year. I was going to the gym regularly but I was not following any particular program other than going from one exercise machine to another,” Bagtas shares.

CrossFit is a lifestyle characterized by safe, effective exercise, and sound nutrition. It works for everyone, meaning people who are starting out and for advanced athletes because the workouts can be modified depending on the individual’s goal. Basic movements include squatting, push-ups, pull-ups, and other exercises. Every exercise is done within a time-frame and around 10 seconds of rest in between repetitions or what is prescribed by the workout.

Since its inception in 2000, CrossFit has gained worldwide popularity. It has over 13,000 box gyms across the US. They are referred to as boxes because the CrossFit gym is typically in a warehouse-type space and instead of machines, there are stacks of weights, barbells, pull-up bars, and open space for movement. The CrossFit brand also gives certifications to coaches. Starting in 2007, CrossFit has been dominating the fitness scene, choosing the Fittest Men and Women in the world who participate in the CrossFit games.

“I thought I was strong”

In February, Bagtas enrolled at CrossFit Kivnon, a physical gym located in La Mesa, California. At the time, CrossFit Kivnon was open to members to come in and workout. He thought he was strong because he also went to the gym.

“The biggest challenges were my mobility and endurance. I had such a hard time doing a lot of the movements and the weightlifting because my muscles were so tight. I had lost a lot of the flexibility I had when I was younger from leading a sedentary lifestyle,” Bagtas shares.

CrossFit has various WODs or Workout of the Day with names such as “Fight Gone Bad” which is composed of a 17-minute AMRAP (as many rounds/repetitions as possible) consisting of 3 rounds of these movements: 1 minute of Wall Ball shots (20-pound medicine ball), 1 minute of Sumo Deadlift High Pulls, 1 minute of Box Jumps (24” box), 1 minute of Push Presses (75 pounds), 1 minute of rowing (for calories), 1 minute of rest in between rounds.

During the first phase, he modified his movements, like using lighter weights and stepping up instead of jumping. 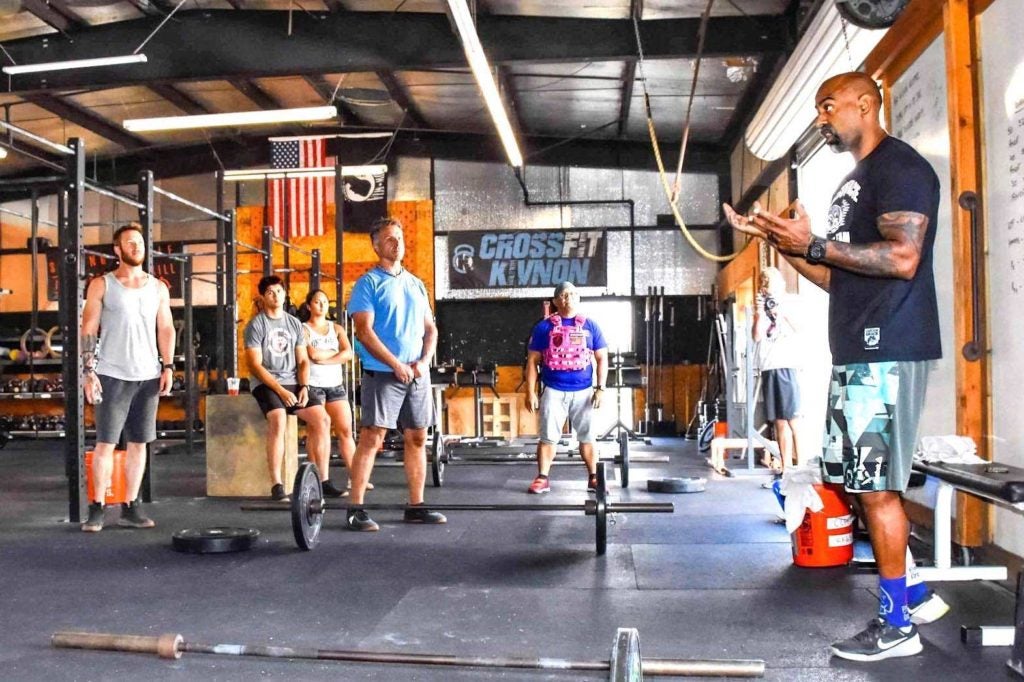 “It was a humbling experience. It taught me to respect the sport,” Bagtas says.

In March 2020, the United States was in a lockdown due to COVID-19. The gym offered home WODs via Zoom. Presently, they are back in the box to a more personalized training.

At his age, Bagtas considers himself a Master’s athlete in competitive CrossFit. In his box, there are men and women of various ages and even older people who outlift, outrun, and outperform him.

“My goal is to be that fit, if not fitter when I get to my Golden years. CrossFit prepares you to be ready for just about any challenge that comes your way,” Bagtas says.

“Burpee” is one popular exercise in CrossFit. In this movement, you start in a standing position, drop to the ground and do a push-up, then jump into the air and clap with your hands above your head.

“One member asked why do we do burpees and our coach replied, ‘So that you can stand up if you fall down when you get older.’ That’s when the concept of functional fitness made sense to me. We train so that we can move,” Bagtas explains.

Nutrition is also an important factor in CrossFit.

Before embarking on CrossFit, Bagtas consulted his doctor.

“My doctor was very encouraging because he had done his research about CrossFit and he knew exactly what to tell me. Taking easy and avoiding the temptation to over-train was his advice,” Bagtas says.

CrossFit is also controversial because of the risks of injuries from forcing your body to perform exercises. Bagtas explains that it depends on the attitudes of the coaches and athletes. For him, CrossFit has done amazing things for his body. He already shed 40 pounds of fat and gained 20 pounds of muscles.

In July, Bagtas and his coach, Shaye Patel, co-founded the Full Send Functional Fitness Collective, a free online fitness site. Full Send targets people who are just starting out in Crossfit, as well as experienced athletes.

According to Bagtas, the term “full send” is used when an athlete gives 150% effort at their sport.

“It is the goal of every athlete – to train so that they can go full send and give their maximum effort to get the best possible results. It is also a mistake that many new athletes make – they start a workout and instead of pacing themselves so that they can finish, they give their all during the first few rounds and end up with nothing left to give. We aim to help new athletes achieve their goal of someday going ‘full send’ on their workouts,” he explains.

In the future, they plan to open a performance lab where they will work with people to divide ways to scale the exercise to their level.

The financial cost of Crossfit may be a turn-off to many. But the advantages one can get from coaching, nutrition guides and the overall health benefit are a good investment.

In April, Bagtas’s endocrinologist told him that the signs of the pre-diabetic stage were gone. Bagtas shares that the Crossfit community is unlike the individualistic traditional gyms.

“At CrossFit, I’m actively part of what is going on. If I am not being encouraged to finish, I’m encouraging others to keep going.”

Bagtas knows that age cannot be controlled. But we can control how we age.

“In a short time that I have been doing CrossFit, I can move freely, my aches and pains from simply getting out of bed or sitting at my computer writing software all day have all but disappeared.”