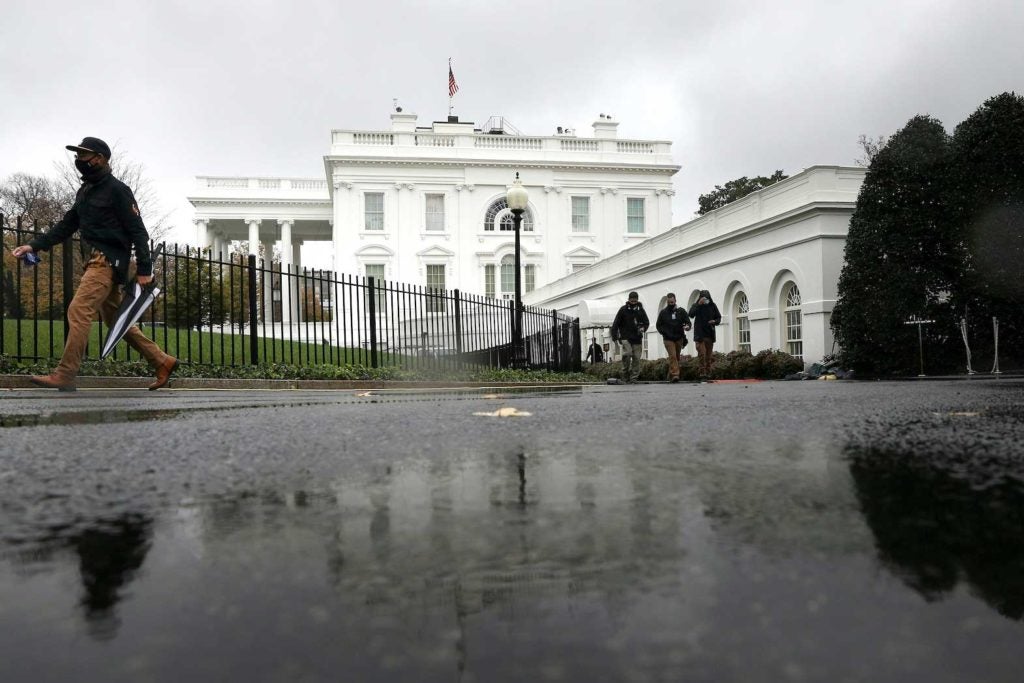 White House staff and journalists walk across the North Lawn Driveway as rain falls over the White House during a storm in Washington, U.S., November 12, 2020. REUTERS/Tom Brenner/File Photo

WASHINGTON – The Trump administration on Thursday unveiled an executive order prohibiting U.S. investments in Chinese firms that Washington says are owned or controlled by the Chinese military, ramping up pressure on Beijing after the U.S. election.

The order, which was first reported by Reuters, could impact some of China’s biggest companies, including telecoms firms China Telecom Corp Ltd, China Mobile Ltd and surveillance equipment maker Hikvision.

The move is designed to deter U.S. investment firms, pension funds and others from buying shares of 31 Chinese companies that were designated by the Defense Department as backed by the Chinese military earlier this year.

Starting Jan. 11, the order will prohibit purchases by U.S. investors of the securities of those companies. Transactions made in order to divest ownership in the companies will be permitted until Nov. 11, 2021.

“China is increasingly exploiting United States capital to resource and to enable the development and modernization of its military, intelligence, and other security apparatuses,” said the order released by the White House.

The Chinese embassy in Washington did not immediately respond to a request for comment.

White House trade adviser Peter Navarro estimated that at least half a trillion dollars in market capitalization was represented by the Chinese companies and their subsidiaries.

“This is a sweeping order designed to choke off American capital to China’s militarization,” he told reporters on a call.

The move is the first major policy initiative by President Donald Trump since losing the Nov. 3 election to Democratic rival Joe Biden and indicates that he is seeking to take advantage of the waning months of his administration to crack down on China, even as he has appeared laser-focused on challenging the election result.

Biden has won enough battleground states to surpass the 270 electoral votes needed in the state-by-state Electoral College that determines the next president, but Republican Trump has so far refused to concede, citing unsubstantiated claims of voting fraud.

Thursday’s action is likely to further weigh on already fraught ties between the world’s top two economies, which are at loggerheads over China’s handling of the coronavirus pandemic and its move to impose security legislation on Hong Kong.

Biden has not laid out a detailed China strategy but all the indications are that he will continue a tough approach to Beijing, with whom Trump has become increasingly confrontational in his last year in office.

The order echoes a bill filed by Republican senator Marco Rubio last month which sought to block access to U.S. capital markets for Chinese companies that have been blacklisted by Washington, including those added to the Defense Department list.

“Today’s action by the Trump administration is a welcome start to protecting our markets and investors,” said Rubio, a top congressional China hawk. “We can never put the interests of the Chinese Communist Party and Wall Street above American workers and mom and pop investors.”

His comments were echoed by Republican Congressman Jim Banks, who described the order as “one of the wisest and most significant foreign policy decisions President Trump has made since he entered office.”

Rubio’s bill and the order are part of a growing effort by Congress and the administration to thwart Chinese companies that enjoy the backing of U.S. investors but do not comply with U.S. rules faced by American rivals. It also shows a new willingness to antagonize Wall Street in the rivalry with Beijing.

In August, U.S. Securities and Exchange Commission and Treasury officials urged Trump to delist Chinese companies that trade on U.S. exchanges and fail to meet its auditing requirements by January 2022.

“The market is probably worried that President Trump is going to increase tensions with China and Iran in his last two months as president,” said Chris Zaccarelli, Chief Investment Officer of the Independent Advisor Alliance.

Still, it was unclear how investors would react. The order bans transactions, which it defined as “purchases,” so investors would technically be able to hold onto current investments.

While the document does not spell out specific penalties for violations, it gives the Treasury Department the ability to invoke “all powers” granted by the International Emergency Economic Powers Act, which authorizes the use of tough sanctions.

Questions also remain about whether Biden, who is set to take office just nine days after the order goes into effect, would enforce it or simply revoke it. His campaign declined to comment.