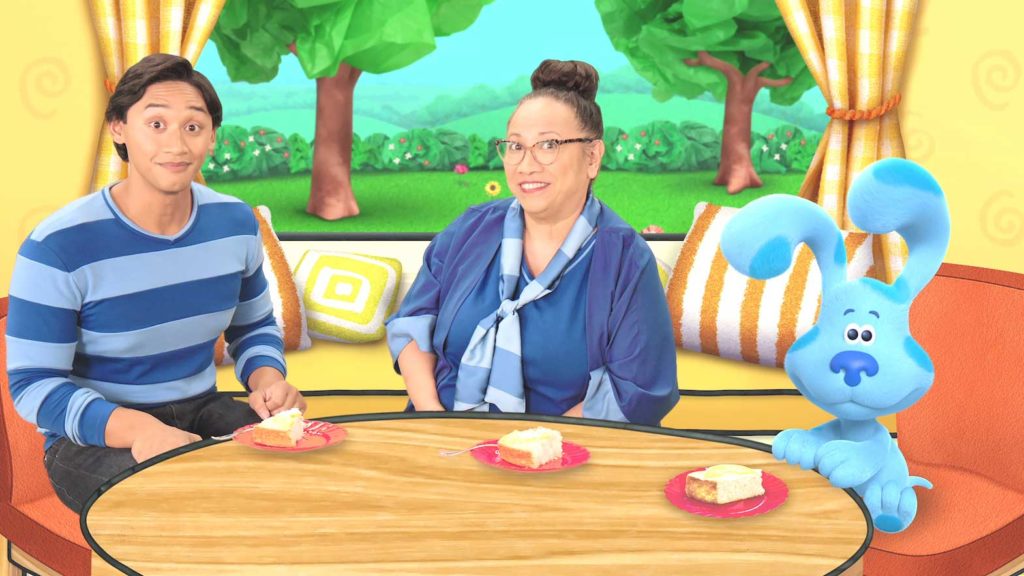 Nickelodeon is partnering with national nonprofit organization Baby2Baby this holiday season for the first-ever Blue’s Clues & You! “Blue Friday,” on Friday, Nov. 20.

In honor of “Blue Friday,” Nickelodeon will make a donation to Baby2Baby to support their mission of helping kids and families who need it most.

Carolyn Fe is a dual-city-citizen of Toronto and Montreal, Canada and is an award winning trilingual actress (Fluent in English, French, Tagalog) having worked in theatre and on screen in movies, TV and various web series. She has also worked on the music stages across the country as an award winning Blues Singer-Songwriter performing original material from her four albums.

Viewers can get into the holiday spirit with Josh and his family with the brand-new Blue’s Clues & You! premiere on Friday, November 20, at 11 a.m. (ET/PT) on Nickelodeon, fans will meet Josh’s “Lola” in “Blue’s Big Baking Show,” as Josh and Blue spend the day making “bibingka,” a cake from the Philippines that is “masarap” (delicious)!

The series features new CG-animation for Blue and Magenta, brand-new elements and refreshed iconic items from the original series including an updated Handy Dandy Notebook equipped with smartphone technology and the return of fan-favorite characters.

The current second season of Blue’s Clues & You! will explore Josh’s Filipino-American heritage by incorporating traditional foods and Tagalog language, and continue to introduce kids to advanced subject matter such as sign language, geography, climate, science and emotions. The series airs regularly weekdays at 11 a.m. (ET/PT) on Nickelodeon.

Nickelodeon, now in its 41st year, is the number-one entertainment brand for kids. It has built a diverse, global business by putting kids first in everything it does. The brand includes television programming and production in the United States and around the world, plus consumer products, digital, location based experiences, publishing and feature films. For more information or artwork, visit http://www.nickpress.com. Nickelodeon and all related titles, characters and logos are trademarks of ViacomCBS Inc. (Nasdaq: VIACA, VIAC).

Baby2Baby provides children living in poverty, ages 0-12 years, with diapers, clothing and all the basic necessities that every child deserves. Throughout the COVID-19 crisis, they have provided over 40 million essential items including diapers, formula, soap, shampoo, masks, hand sanitizer, baby food and more to some of the most vulnerable children across the country impacted by the pandemic.