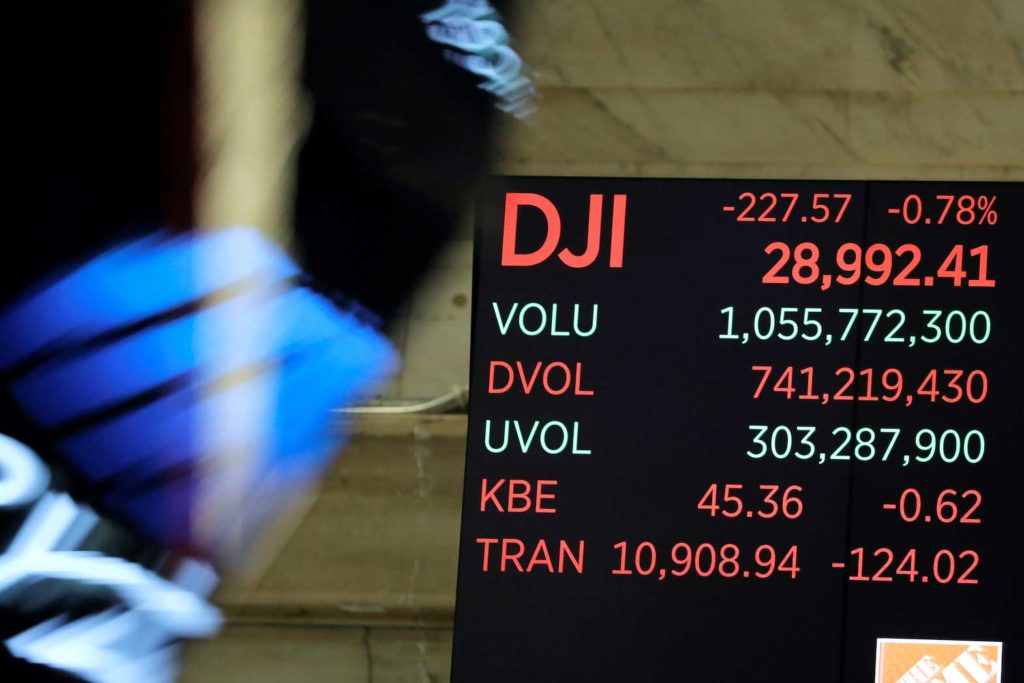 Numbers showing the state of the Dow Jones Industrial Average are displayed above the floor after the closing bell at the New York Stock Exchange (NYSE) in New York City, U.S., February 21, 2020. REUTERS/Andrew Kelly

The S&P 500 and the Dow slipped on Thursday as U.S. coronavirus infections surged and investors weighed the timeline of the mass roll-out of an effective vaccine.

New York became the latest state to introduce social distancing restrictions on Wednesday, as new infections in the country surged above 100,000 for an eighth consecutive day.

The blue-chip Dow dropped 0.5% as industrial and financial companies sensitive to economic growth fell, with Boeing Co and Goldman Sachs down about 2% each.

Wall Street’s three main indexes have climbed between 8% and 10% in less than two weeks on prospects of measured industry regulation from a potentially divided Congress, as well as an encouraging update from a late-stage coronavirus vaccine trial.

“The focus has shifted back from politics, election, stimulus to where it was before, the virus and its economic impact,” said Keith Buchanan, senior portfolio manager at Globalt Investments in Atlanta.

“Given the fact that the virus spread is more geographically diverse than it was in the summer and early in spring, it is causing some alarm in the public health community and policy makers have started to think if restrictions can be effective and how to go about implementing them.”

Latest data showed U.S. jobless claims fell to a seven-month low last week, but the pace of job recovery slowed as fiscal stimulus waned and further improvement could be limited by a raging pandemic.

These companies, which have logged strong demand during the work-from-home shift, fell sharply earlier this week as investors rotated to value stocks on hopes of a faster economic rebound following positive COVID-19 vaccine data.

Among the biggest boosts to the Nasdaq was a 20% surge in the U.S.-listed shares of Chinese e-commerce company Pinduoduo Inc, after it reported better-than-expected quarterly revenue.

Financials and energy posted the sharpest percentage losses among major S&P sectors, while technology and communication services were the only two indexes posting gains.

Moderna Inc added 4% after the drugmaker said it had enough data for a first interim analysis of the late-stage trial of its experimental COVID-19 vaccine. It did not say when it plans to release the data.

Walt Disney Co and network gear maker Cisco Systems Inc slipped ahead of their quarterly results due after markets close.

Declining issues outnumbered advancers for a 1.6-to-1 ratio on the NYSE, while a 0.8-to-1 ratio favored decliners on the Nasdaq.