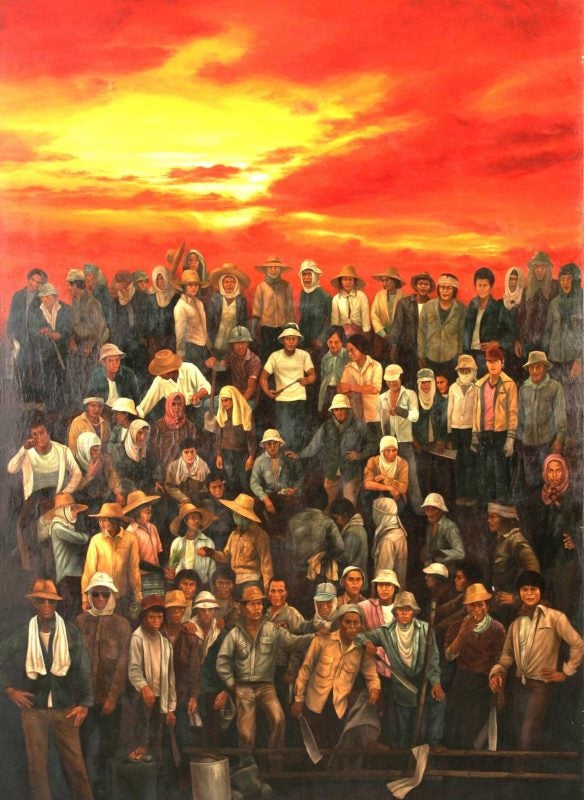 The exchange of thoughts and ideas are available in playback recording and their works of art can be seen at the company website:  https://eaglecharities.org/fanh

The charity’s website offers a link to a $15,000 grant in honor of front-liners in the United States, including restaurant workers, who perished due to Covid-19. (An application link must be filed by family members before May 15, 2021.) The Brave of Heart Fund was set up by sponsors New York Life Company and CIGNA for all affected front-liners in the U.S., not only Filipinos, with the possibility of receiving another $60,000 grant.

The multi-awarded living masters of Philippine visual arts shared their personal journeys. Renato R. Habulan, a social realist who emerged from the Martial Law era, recipient of Gawad CCP sa Sining Biswal, turned back the pages of time with his iconic 1982 mural “Kagampan,” with 72 figures symbolic of the Filipinos’ coming of age, which is now in the collection of the National Art Gallery of Singapore.

At the time of Kagampan’s exhibit in August 1983, Ninoy Aquino was assassinated, and this painting made its way to the Manila Bulletin’s Panorama cover story on the “Tarlac to Tarmac” march of angry protesters. Mang Ato, as he is known to many, trained in abstract impressionism during his days as UP Fine Arts student, before he became a social realist interpreting the narrative of the changing times of the country. 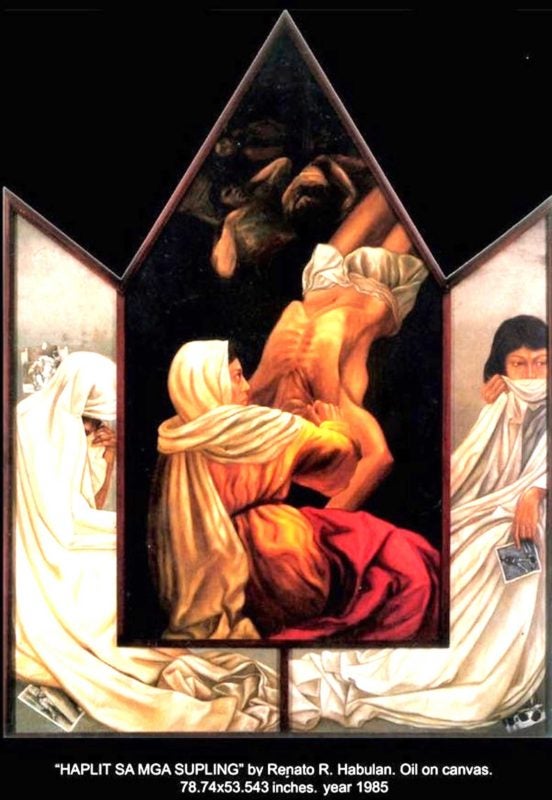 Another iconic painting, “Haplit sa mga Supling” (1985), is about the violence inflicted on the people. “Supling refers to us, children of God. This painting was part of Magnificat exhibit at Ayala museum in September 8,1985, where Cory Aquino opened the exhibit and announced her candidacy. Morning of that day the Agrava commission cleared General Ver as man behind the assassination of Ninoy Aquino,” recalled Habulan.

He coached countless great artists and he mentors young talents at Eskinita Gallery, Makati City. He concluded, “All my mentees are conscious of their role as artists. As a chronicler of their time, they must go beyond the beauty and aesthetics that separate them from the bandwagon effect. The lens that they used are wide and multi-focused and showed the context, the historical milieu and more importantly the emotion of the subject.” See more of his works at https://eaglecharities.org/renato-habulan 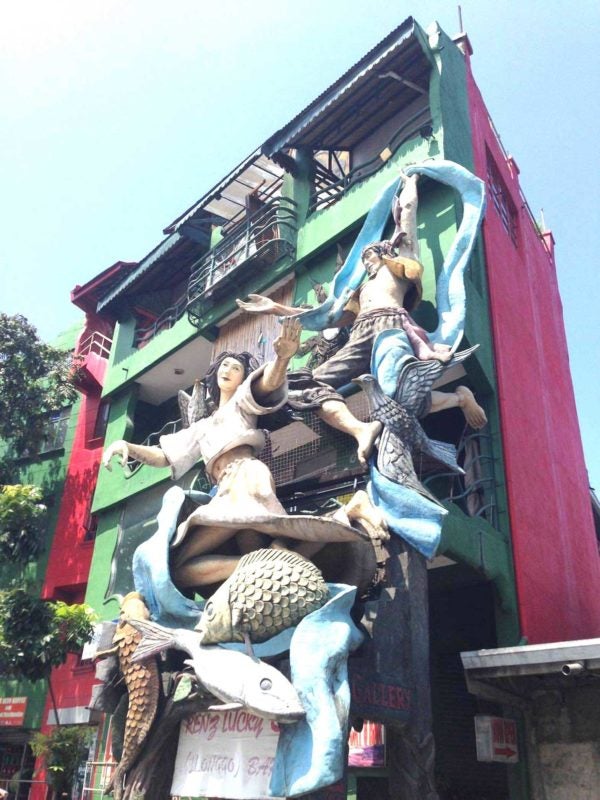 Sculptor Nemi Miranda’s residence, “Bahay Kubo” with the Sea Goddess, maintains the look and freshness of a Filipino home inside the edifice, which doubles as a museum.

Nemesio “Nemi” Miranda, also known as Nemiranda, is regarded as the Father of Imaginative Figurism, a style in which concrete forms and human subjects are drawn from his imagination. He is from Angono, Rizal where he established an Art Camp, and was founder of Angono Ateliers Association in 1975, the promoter of “Higantes Festival.” A Bachelor of Arts graduate of UST, he achieved so many notable works including the People Power Revolution painting, EDSA Shrine mural, EDSA II sculpture, Ortigas & Co sculpture, among others. His biggest yet, the History of Philippine Army, stood as witness to historic events of our time.

According to Nemiranda, his nationalistic artistry “was influenced by three Franciscos who were all driven by a burning passion for the flag. First is Francisco V. Coching, regarded as the Dean of Philippine Comics, whose works gave identity to Filipino pop culture. The others are fellow Angono artist Carlos ‘Botong’ Francisco and Arch. Francisco Mañosa. All three have been conferred the National Artist Awards.” 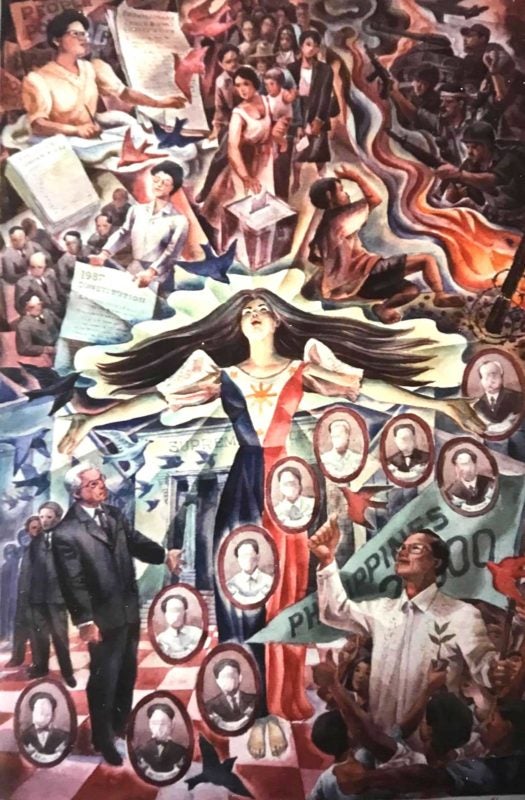 The eighth of Nemiranda’s murals, The New Constitution, part of the 500-year history of the Supreme Court of the Philippines.

“I admire them so much. These three are very nationalistic, at ’yun din ang nasa puso ko, ’yun din ang kaluluwa ko (That is also my heart and soul). What you see in my works is the product of my soul,” he said. Miranda says he sometimes goes out to do on-the-spot painting sessions. But even then, he does not “copy” what he sees but “recreates” them.

The influences of these art icons were reflected in Nemiranda’s series of murals commissioned by the Supreme Court narrating the 500-year history of Philippine judicial system. He designed eight murals that pertained to:  1.) Pre-Spanish Times; 2.) Spanish Occupation; 3.) American Commonwealth;  4.) 1935 Constitution; 5.) Japanese Occupation; 6.) Martial Law era, 7.) 1986 Revolutionary Govt; and 8.) The present Constitution. See his works at: https://eaglecharities.org/nemiranda 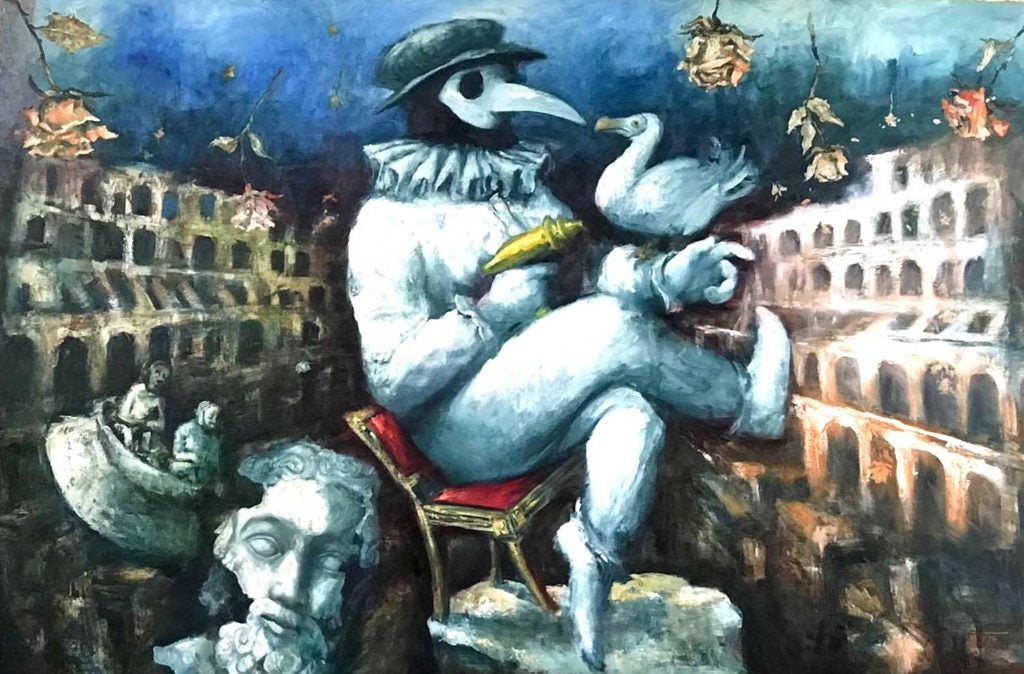 Manny Garibay’s art is about awakening of consciousness.

Emmanuel “Manny” Garibay is a figurative expressionist master from Kidapawan, North Cotabato. Manny was part of UP Fine Arts group Artista ng Bayan (People’s Artist) where he committed to align himself with the marginal members of the society. He was drawn to the “richness of the poor” images in his canvas: ordinary people, vendors, activists, newsboys. He then mastered Theology and Divinity. His works were exhibited in Europe, Asia and the United States.

In 2011, the Overseas Ministries Studies published a limited monograph edition entitled “Where God Is: The Paintings Of Emmanuel Garibay.” As quoted, “Art is all about an idea that you want to share, a way of seeing the world that you want people to appreciate in their world.”

His works involve a remarkable combination of social realism — much as he refuses to be boxed in a particular category — but an imaginative  figurative expression, with seriousness and humor that is a sharp contrast of the character he wishes to convey. Garibay mentors a group called Artletics and seeks to organize further the art residency of his students at Alfonso, Cavite. Listen to some excerpts of his mentoring classes online with Eagle Eye Charities artists participating at: https://eaglecharities.org/manny-garibay 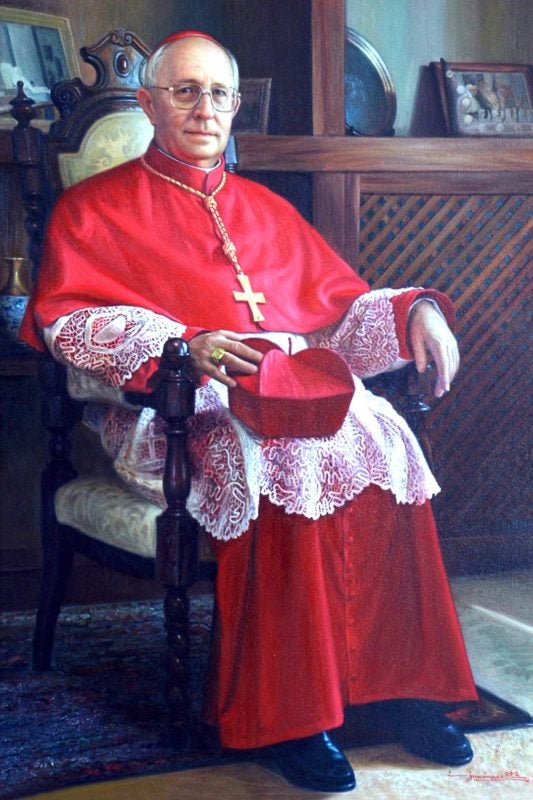 He showed techniques he applied in one of the commission works he did when he flew to the Vatican City to work on the portrait of the Most Reverend Cardinal Feloni, where he demonstrated exquisite details of his drawing, his study of light, until its completion to a stunning true to life painting in oil. See his portraiture technique at:  https://eaglecharities.org/portraiture 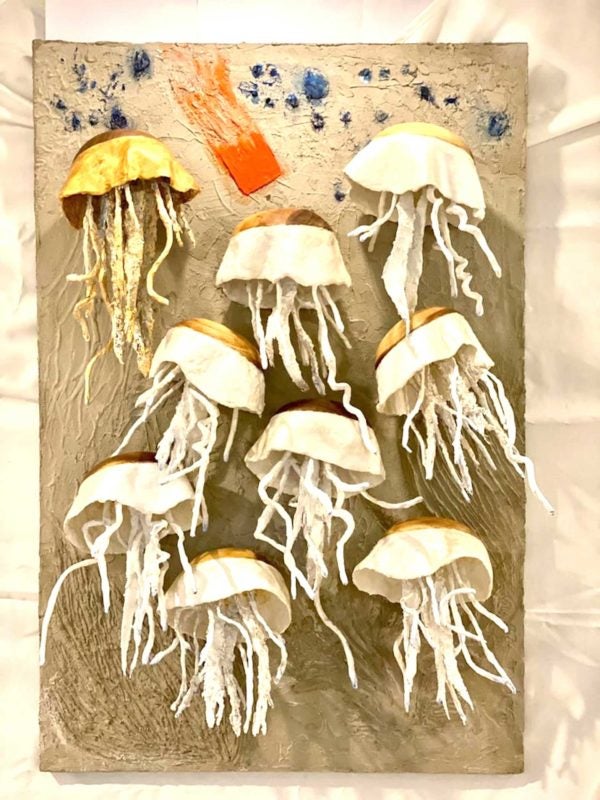 Sculptor Eugie Varona Dela Cruz presented his jellyfish woodwork, a metaphor for patience. He hails from a family of carpenters at Bulacan. He learned the basics of woodworking from his own father, understanding the different qualities of wood, and he went on to advance his skill to inlay woodworking. On his jellyfish subject, Eugie explained, “The Flow reminds us to be like the jellyfish at this time of pandemic, to be like them when the ocean current is very strong, never go against it. They know they cannot overpower the strength of the current, they just flow with the current until it becomes calm again.”

His upcoming wood inlay exhibition is opening on November 10, 2020 at Sining Makiling Gallery, DL Umali Hall, UP Los Banos, and it will run until Dec. 18, 2020. His other sculptures and paintings are currently on silent auction for the benefit of nonprofit causes and can be viewed at  https://eaglecharities.org/ Sculpture category.   The works of 30 multi-awarded visual artists in contemporary realism and modern arts are also curated on the same page.

Co-hosting the FANH event with this writer is Dr. Romulo Aromin Jr., the first recipient of Patron of Art citation for his continuing support and advocacy in the filed of arts, film and fashion. As a staunch supporter of LGBTQIA initiatives, and the Executive Producer of the multi-awarded film Lingua Franca, he announced the showing of the film for the first time in Manila on November 20; it is currently streaming on Netflix. A teaser can be found at FANH page of Eagle Eye Charities site.