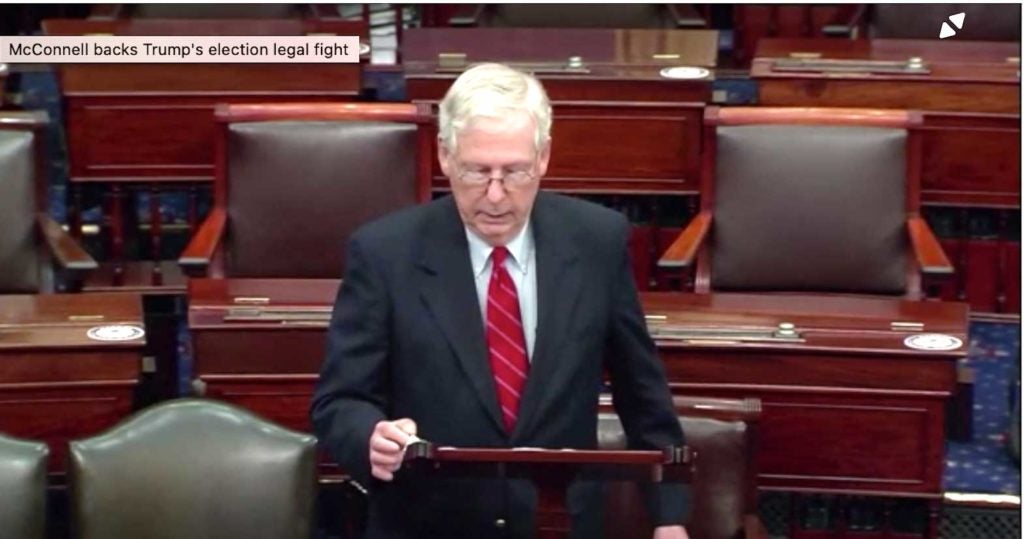 WASHINGTON/WILMINGTON, Del. (Reuters) – President Donald Trump will push ahead on Tuesday with longshot legal challenges to his election loss, as Republican U.S. lawmakers and state officials defended his right to do so.

Pennsylvania Republican state lawmakers called for an audit of results in the state that on Saturday enabled Democrat Joe Biden to secure the more than 270 votes in the Electoral College he needed to win the presidency.

Biden, the president-elect due to take office on Jan. 20, 2021, also leads Trump in the popular vote by more than 4.6 million votes, according to the latest count of ballots.

Trump has made baseless claims that fraud was marring the results. The count has been delayed by a surge in mail-in ballots prompted by voters’ desire to avoid infection from the coronavirus pandemic.

Judges have tossed out lawsuits in Michigan and Georgia, and experts say Trump’s legal efforts have little chance of changing the election result.

The leading Republican in Congress, Senate Majority Leader Mitch McConnell, on Monday carefully backed Trump, saying that he was “100% within his rights to look into allegations of irregularities,” without citing any evidence.

McConnell’s comments represent the thinking of most Senate Republicans for now, said a senior Senate Republican aide. “The position is tenable until it isn’t and might last for a week or two before it becomes untenable,” the aide said.

The dispute has slowed Biden’s preparations for governing.

A Trump appointee who heads the office charged with recognizing election results has yet to do so, preventing the Biden transition team from moving into federal government office space or accessing funds to hire staff.

The General Services Administrator Emily Murphy, appointed by Trump in 2017, has yet to determine that “a winner is clear,” a spokeswoman said. Biden’s team is considering legal action.

U.S. Attorney General William Barr on Monday told federal prosecutors to “pursue substantial allegations” of irregularities of voting and the counting of ballots.

He also told them that “fanciful or far-fetched claims” should not be a basis for investigation. His letter did not indicate the Justice Department had uncovered voting irregularities affecting the outcome of the election.

Richard Pilger, who for years has served as director of the Election Crimes Branch in the Justice Department, said in an internal email he was resigning from his post after he read “the new policy and its ramifications”.

The previous Justice Department policy, designed to avoid interjecting the federal government into election campaigns, had discouraged overt investigations “until the election in question has been concluded, its results certified, and all recounts and election contests concluded.”

“Those are the very kind of claims that the president and his lawyers are making unsuccessfully every day, as their lawsuits are laughed out of one court after another,” said Bob Bauer, a senior adviser to Biden.

“The voters decide the winner in an election, not the President, and not the Attorney General,” wrote the group, which includes Don Ayer, a deputy attorney general under former President George H.W. Bush.

“We have seen absolutely no evidence of anything that should get in the way of certification of the results, which is something the states handle, not the federal government.”

Although a few Republicans have urged Trump to concede, the president still had the support of prominent party leaders who had yet to congratulate Biden.

Trump’s campaign on Monday filed a lawsuit to block Pennsylvania officials from certifying Biden’s victory in the battleground state, where the Democrat’s lead grew to more than 45,000 votes, or nearly 0.7 percentage points, with 98% of ballots counted on Tuesday morning.

It alleged the state’s mail-in voting system violated the U.S. Constitution by creating “an illegal two-tiered voting system” where voting in person was subject to more oversight than voting by mail.

“The Trump campaign’s latest filing is another attempt to throw out legal votes,” Pennsylvania Attorney General Josh Shapiro, a Democrat, said on Twitter.

Pennsylvania state Representative Dawn Keefer led a group of Republican state lawmakers on Tuesday in calling for a bipartisan investigation with subpoena powers to see if the “election was conducted fairly and lawfully.”

Asked about any evidence of fraud, Keefer told reporters, “We’ve just gotten a lot of allegations,” adding that “they’re too in the weeds” for her to know more without investigating.

Biden will give a speech on Tuesday defending the Affordable Care Act, the landmark healthcare law popularly known as Obamacare, as the U.S. Supreme Court heard arguments on a lawsuit backed by the Trump administration to invalidate it.