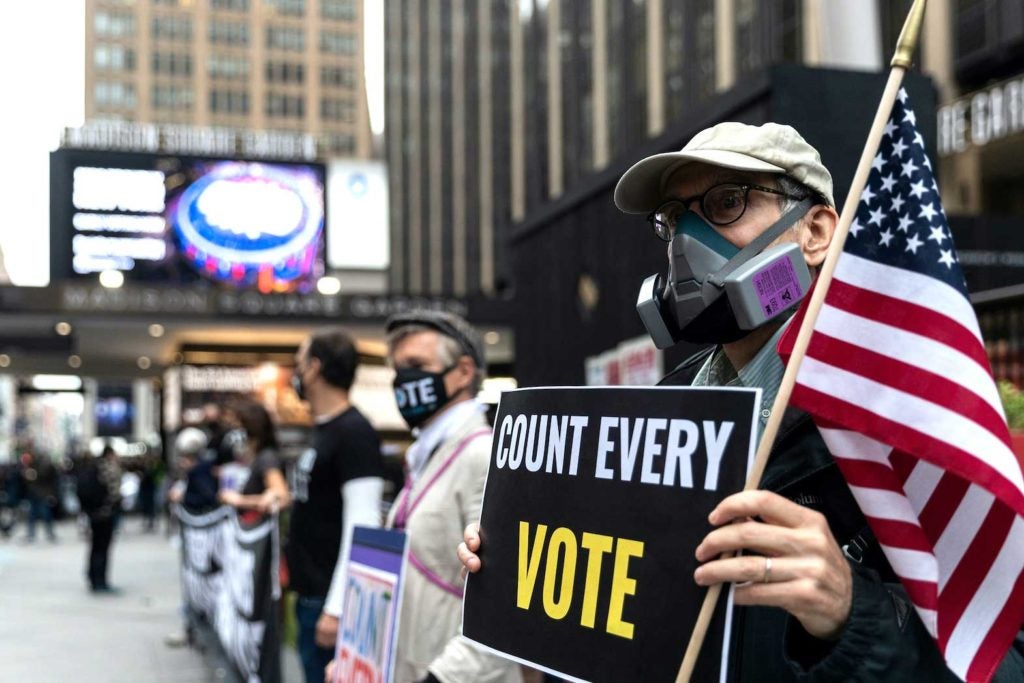 A man wearing a protective mask due to COVID-19 pandemic holds a sign outside Madison Square Garden, which is used as a polling station, on the first day of early voting in Manhattan, New York, U.S. October 24, 2020. REUTERS/Jeenah Moon

Democrats say their advantage in early voting has allowed Joe Biden’s presidential campaign to sharpen its get-out-the-vote operation by targeting a smaller universe of potential supporters, while Republicans brace for an all-or-nothing scramble to turn out votes for President Donald Trump on Nov. 3.

Early voting, both by mail and in-person, has surged to record highs, with Americans energized by a high-stakes election while also worried about crowded polling places amid the coronavirus pandemic. State data on who has voted early show ballots cast by registered Democrats so far outpacing those cast by registered Republicans.

A voter’s party affiliation does not necessarily indicate which candidate they backed. But polls show the vast majority of early votes cast by registered Democrats are likely for Biden, setting up the prospect that the candidate will have a sizable lead heading into Election Day, including in crucial battleground states such as Pennsylvania, North Carolina and Arizona.

Across the 20 states that publish the party registration of early voters, more than 17.4 million registered Democrats had voted by Wednesday compared with 10.8 million registered Republicans, according to figures compiled by the U.S. Elections Project at the University of Florida.

About 47 million Americans who have voted so far either are not affiliated with a party or live in a state that does not publicly report a voter’s party affiliation.

The Trump campaign did not respond to questions about the importance of Election Day turnout to the president’s hopes of winning a second term. But Republicans contend the Democratic early ballots have merely “cannibalized” Biden’s Election Day vote, with most Democrats simply shifting to another day.

Biden’s campaign acknowledged that many, if not most, of its early voters would have shown up on Election Day anyway. Still, having so many votes already cast allows them to focus their resources either on convincing infrequent voters to come out to the polls, or on persuading independent or even Republican-leaning voters who have yet to decide, officials said.

“Every time someone votes, we can remove them from our universes,” Becca Siegel, the campaign’s chief analytics officer, told Reuters. “As more people vote, we can talk to our core sporadic-voting Democrats more. We can also expand our universe to even lower-propensity voters. That’s something we can do that the other side cannot.”

In a year upended by all manner of unexpected happenings, banked votes also serve as an insurance policy in the event that COVID-19, weather or some other disruption keeps voters away from the polls on Nov. 3, said Josh Mendelsohn, chief executive of Hawkfish, a Democratic data firm.

Republican officials, meanwhile, are stepping up their get-out-the-vote efforts. In Pennsylvania, where registered Democrats account for 69% of the nearly 2 million early votes cast so far, Republicans are texting those who have requested mail ballots but have yet to return them. Republicans also are making plans to bring a carnival-like atmosphere to polling lines on Nov. 3.

In Northampton, a swing county that Trump won by 4 percentage points in 2016, volunteers plan to set up tents and Trump flags at the 10 most-active polling places to motivate voters, said Lee Snover, head of the Republican Party in the county. The volunteers also will hold a voter’s place in line if they need to pick up their kids, she said.

“We only have hours to make this happen, so we need to make sure we get every vote,” Snover said.

Jim Worthington, who owns an upscale fitness center in the Philadelphia suburbs, founded a pro-Trump group to help the president win Pennsylvania’s suburban Bucks County and keep the competitive 1st Congressional District in Republican hands. He said he spent $500,000 to identify and reach out to roughly 15,000 people who do not regularly vote. The money was first spent to convince them to vote by mail, but will turn to a door-knocking and phone campaign as Election Day nears.

“It’s a turnout election, and we need a huge turnout,” Worthington said.

Republicans have long embraced mail balloting, but they have shifted to in-person voting amid repeated, unfounded attacks from Trump who says the system is plagued by widespread fraud. With the data indicating that many Democrats have already voted, some Republican strategists say Trump may now need a massive single-day turnout of his supporters to counter the early Biden advantage at a time when coronavirus cases are surging.

“That was always going to be the risk Republicans faced. If there was a (COVID-19) spike, and obviously there is a spike, that could be a real problem,” said Amy Koch, a Republican strategist from Minnesota, one of several northern battleground states where virus case rates are rising rapidly.

Trump continues to hold massive rallies where many attendees shun masks, a sign his supporters are unfazed by the health risks.

“I ask you one little favor: get the hell out and vote,” Trump told thousands gathered in chilly Nebraska on Tuesday.

More than 75 million Americans had already cast ballots as of Wednesday. That’s by far the most-ever in early voting, and it’s more than half the final turnout of 138 million votes recorded in the 2016 election. The staggering figures have prompted some analysts to predict the highest turnout rate in a century.

The actual votes for each candidate won’t be known until polls close, perhaps with a lag of days or more.

Pollsters have long predicted Biden voters would dominate mail-in voting after Trump’s repeated, unsubstantiated claims that it would be ridden with fraud. Still, many registered Republicans have taken advantage of early in-person voting, so far showing up in greater numbers than Democrats in Florida, for instance.

Democratic data firm Hawkfish, which uses demographic data from polls to model which candidate a voter would likely support, gives Biden a lead of more than 3 million votes across Arizona, Florida, Michigan, North Carolina, Pennsylvania and Wisconsin, according to data shared with Reuters through Oct. 25.

The Biden campaign said most Democratic early voters were reliable supporters that the campaign had been counting on to cast ballots. Banking them early has bought the campaign more time to focus on people who lean Democratic but might not always turn up at the polls.

The campaign can also expand its persuasion targets, turning its attention to “soft Trump” supporters as more “soft Biden” supporters have voted, according to Siegel, the campaign’s chief analytics officer.

The campaign uses data to identify specific television networks that their target voters are watching. As more Democrats have voted, conservative-leaning Fox News has risen in importance as a persuasion tool, Siegel said, though she wouldn’t say whether the campaign planned to alter its ad buys there.

Biden’s campaign has spent just over $3 million on Fox News ads in October, more than any other cable network, according to Advertising Analytics, an ad tracking firm.

In Iowa, a state Trump won comfortably in 2016 but where polls show a competitive race, Democrats in Polk County, which contains the city of Des Moines, have returned their absentee ballots rapidly and in large numbers.

That has freed up the party’s time to court communities less likely to vote, said Sean Bagniewski, the Polk County Democratic chair. He said the party is handing out Bosnian gyros at a mosque to reach the Bosnian refugee community and serving tamales at a Hispanic-owned grocery store.

“Usually we don’t have that bandwidth because we’re focusing on so many people,” he said.

In Florida, more than 45% of the state’s 14 million registered voters have already cast their ballots, reflecting enthusiasm on both sides of the contest.

While Republicans trail registered Democrats in overall early voting by about 250,000 votes due largely to their lower use of mail ballots, they have been closing that gap by voting in-person in higher numbers, state data show.

About 20% of voters in the state have no party affiliation. Nearly one-third of unaffiliated Florida early voters this year were not registered or did not vote in 2016, said Daniel Smith at the University of Florida.

Hawkfish, the Democratic data firm, estimates 56% of those who have voted already in Florida were likely Biden voters, compared to 44% for Trump.

Republicans, meanwhile, say they are using detailed data on registered voters to identify those who may lean toward Trump. Trump’s campaign has 190 staff and about 60,000 volunteers in Florida, whose 29 Electoral College votes are key to Trump winning re-election.

“We know every day exactly who voted, we know who’s left, we know who we think is supportive of the president. So it’s our job to turn those voters out,” said Joe Gruters, chairman of the Florida Republican Party.

Trump is also hoping a frantic schedule of rallies in battleground states – each attended by thousands of his most ardent supporters – will deliver him more votes. On Monday, he made three stops in Pennsylvania, his 14th visit to the state since June.

In the state’s Allegheny County, which includes Pittsburgh, Republican chairman Sam DeMarco has personally texted all of the Republican voters in his county who requested an absentee ballot but didn’t turn them in.

Volunteers from as far away as Alabama and Texas have traveled with a group called the “Mighty American Strike Force” to knock on doors in the suburbs of Pittsburgh and to make phone calls to voters, he said.

“We are doing things that we’ve never done before to get our vote out,” DeMarco said.