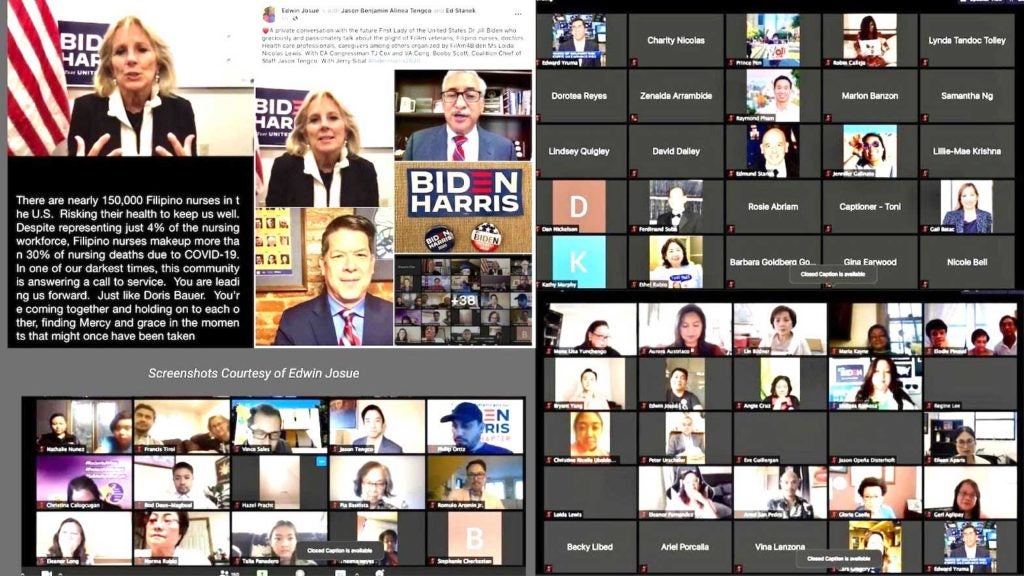 Among themselves, the initial members Filipino American National Finance Council (FANFC) raised $250,000 for the Biden-Harris Victory Fund. An additional $25,000 was contributed by over 200 members of Filipino Americans for Biden-Harris, a grassroots movement led by National Co-chairs Hon. Mark Pulido(retired Mayor of Cerritos City, CA) and Hon. Melissa Ramoso (Councilmember of Artesia City, California). Nicolas- Lewis is also their national spokesperson.

“Filipinos are the fastest-growing Asian American and Pacific Islander (AAPI) group in America today, but we are underrepresented in US politics. It’s time we changed this,” said Nicolas-Lewis.

“The 2010 US Census says there are more than 4 million Filipinos in America, and about 2 million are registered voters. In 2016, only 50% those eligible actually voted, which is very unfortunate. We hope that this Election 2020 will be different — that every eligible Fil-Am will go and vote, because we can be the margin of victory for the candidates we choose to support,” Lewis added.

FANFC started with about 20 members who donated or raised $10,000 each, led by Founding Co-Chairs Atty. Lewis, Rocio C. Nuyda (a former senior executive of a global finance firm), and Gloria T. Caoile (a former Commissioner to the White House Initiative on AAPIs under the Clinton administration).

Time for Filipino Americans to take a seat at the table

While the immediate goal of FANFC is to raise funds (from 2020 to 2024 elections) for federal and congressional candidates who recognize the contributions of the Fil-Am community, their vision is to eventually increase the participation of Filipinos in America’s political scene.

“We need to make sure we have Fil-Am leaders at the table where policies are made, who understand the issues that affect our communities,” says Gloria T. Caoile, who was executive director of the Asia Pacific American Labor Alliance (APALA), the first and only national organization of Asian American and Pacific Islander (AAPI) workers and allies advocating worker, immigrant and civil rights.

Rocio Nuyda, mother to a nursing administrator and health care front liner during the coronavirus pandemic, adds, “Our community is suffering under the Trump administration, especially our nurses and healthcare workers. The lack of PPEs, slow response to the pandemic, and the increase in hateful rhetoric against Asian Americans (led by Trump himself) — has led to over two hundred thousand deaths already. We can’t just look away, and we must not allow this to continue. We need to make our voices heard on the ballot! This time, we can choose to heal under a more compassionate and experienced public servant, and that is Joe Biden.”

During her address to the Filipino American community, Dr. Jill Biden echoed her husband’s sentiments, “In one of our darkest times, this community is answering a call to service… You are reminding us that the heart of this nation still beats with kindness and courage. And you deserve a President who will work just as hard, care just as much, and fight by your side. Joe will be that President. Because he knows that our diversity is our strength. He understands that the story of America is one that we must tell TOGETHER.”

Tony Olaes, one of the founding members of FANFC, says, “I’m a registered independent. I don’t care for party lines. What I stand for is having more empathy and compassion for those who need help. What I take issue with the current administration’s style of leadership is the division it promotes — the ‘us vs. them’ mentality, or people who say that immigrants are the ‘enemy.’ I’ve never seen this level of division even in my own family until Trump came. I have Filipino blood, I come from the Philippines. But I am an American, and I will die for this country. America has given me so much. I don’t have to choose between the two, because I represent both: American and Filipino — it’s part of who I am.”

“The Filipino American National Finance Council is a whole new level of bayanihan,” says Atty. Lewis. “We are putting our money where our mouth is. We want to help rebuild the America we love, where people are kind and compassionate to each other, where justice and truth are upheld, and dreams are allowed to flourish. We understand now that we need to contribute and participate more in American politics if we want to have a say in it. So let’s do our part, whether by early voting or going to the polls on Election Day — let’s get out the Fil-Am vote. Together, we can make America, America again. We are the margin of victory!”