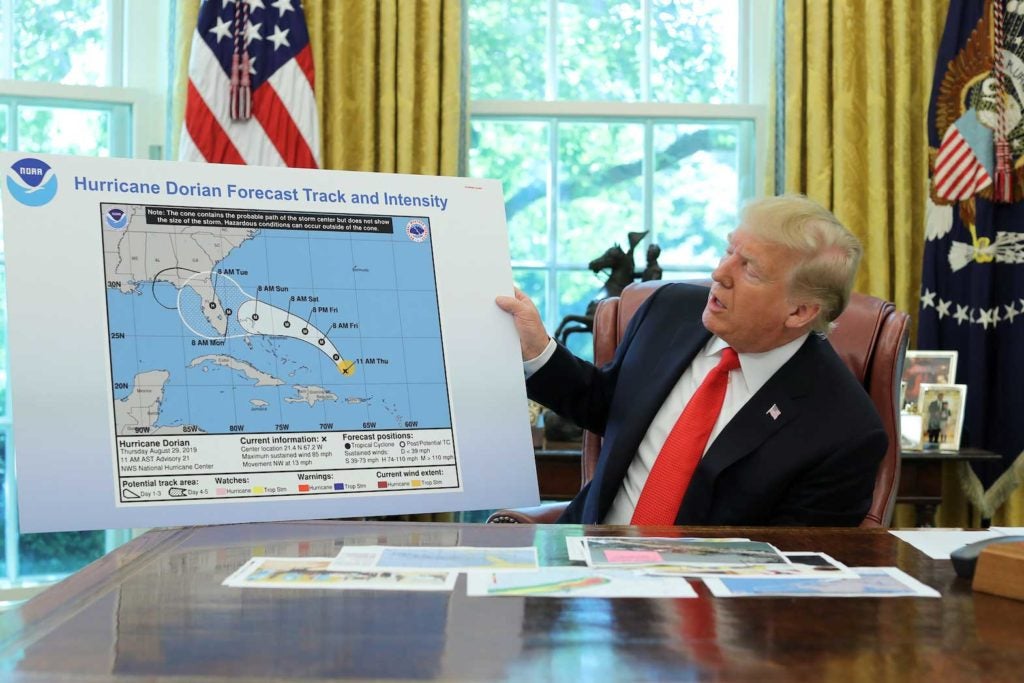 U.S. President Donald Trump looks at a tracking forecast map on Hurricane Dorian as he receives a status report on the storm in the Oval Office of the White House in Washington, U.S., September 4, 2019. REUTERS/Jonathan Ernst/File Photo

WASHINGTON, D.C. – From his lab in Toulouse, France, Benjamin Sanderson models the range of extreme risks to humans from climate change, research he hopes can inform policymakers planning for worsening wildfires and floods. It is the kind of work he once performed in the United States – and hopes to again soon.

Sanderson is among dozens of U.S.-based climate scientists who shifted their research to France, or sought refuge in academia or in left-leaning states like California after Republican Donald Trump was elected in 2016. They worried his administration’s distrust of science would impact their ability to finance and advance their work.

Now, with the presidential election looming – and Democrat Joe Biden ahead in the polls and promising to prioritize the role of science in policymaking – some of these researchers hope for a return to the days when the United States was viewed as the best place on earth to do their jobs.

Climate science in Europe is not treated as a “political topic,” Sanderson said, adding that he would consider returning to the United States under an administration that valued scientific input.

In the United States, the role of scientific research in public policy is clearly on the ballot in the Nov. 3 presidential election.

Some Republicans have sought to undermine the research showing human-caused climate change since long before Trump was elected in 2016, but the sidelining of science-based recommendations in policy decisions has only accelerated since.

Against the advice of researchers, Trump announced plans in 2017 to withdraw the United States from the Paris Agreement, an international accord to fight global warming. He argued the pact would devastate the economy without providing much environmental benefit. His administration has since rolled back more than 100 environmental protections it deemed burdensome to industry, including those seeking to limit greenhouse gas emissions. Trump has also appointed industry insiders or climate change doubters to key roles overseeing environmental regulation and cut scientific advisory committees at federal agencies.

The politicization of science has come into sharper focus this year amid the coronavirus pandemic, as Trump has ridiculed and ignored many research findings and recommendations from the administration’s top infectious disease expert, Anthony Fauci, and the Centers for Disease Control and Prevention.

The administration has made a habit of “ignoring, sidelining and censoring” scientific researchers, according to an August statement by the Union of Concerned Scientists, a nonprofit that advocates for scientific approaches to social and environmental problems.

White House Office of Science and Technology Policy spokeswoman Jordan Hunter did not comment on the departure of scientists under Trump or on the administration’s handling of research on climate change and the pandemic. She said the administration was “committed to ensuring the next great scientific breakthroughs happen in America,” such as artificial intelligence and space exploration.

Biden, by contrast, has promised to fight climate change and to use scientific research and advice to tackle the pandemic. His transition team is already seeking input from informal advisors on how to rebuild and expand U.S. research, the Biden campaign said.

“Science will be at the heart of a possible Biden-Harris administration,” said transition spokesperson Cameron French.

The candidates’ contrasting takes on the value of science may be best summed up by Trump himself, who said at an Oct. 18 rally in Carson City, Nevada: “If you vote for Biden, he’ll listen to the scientists. If I listened to scientists, we’d have a country in a massive depression instead of – we’re like a rocket ship.”

Biden replied the next day over Twitter: “For once, Donald Trump is correct: I will listen to scientists.”

The program came in response to Trump’s decision to begin withdrawing the United States from the Paris climate agreement. At least 32 scientists from across the globe took Macron’s offer, according to the French government. About 18 of them had been working at U.S.-based institutions before they moved some or all of their research to France.

Sanderson had previously worked on projections for extreme weather related to climate change at the National Center for Atmospheric Research in Boulder, Colorado. He moved to the French city of Toulouse, he said, to escape the politics that has engulfed U.S. climate science. He works primarily in the hope of informing policy, an endeavor that “was no longer relevant under the Trump administration,” he said.

Another scientist who went to France is Philip Schulz, a former post-doctoral researcher at the National Renewable Energy Laboratory in Golden, Colorado. Now he studies organic electronics and solar energy in Paris under the French program.

He cited the Trump administration’s climate skepticism as driving his change of job and country. “I work in a field that is trying to combat climate change and enable an energy transition,” Schulz said.

While some U.S. scientists took up Macron’s call to work in France, others fled jobs with the federal government for positions in academia or for left-leaning state governments such as California, which tried to recruit disgruntled researchers.

“I feel they’re like Russian dissidents during the USSR,” said Jared Blumenfeld, California’s Secretary for Environmental Protection, who ran the federal EPA’s Pacific Southwest region from 2010 to 2016. “They’ve been in exile in California.”

Blumenfeld said it will take decades to rebuild science from an onslaught of politics and superstition he believes began under the administration of Republican George W. Bush. He said California will not begrudge researchers who return to federal government jobs if Trump loses the election.

“If they want to go back and continue to work and build up these battered institutions, Godspeed,” he said. “We’ve been here to take them in from the storm.”

Other U.S. government scientists and experts have found refuge in academia.

Joel Clement, a former director of the office of policy analysis at the U.S. Interior Department, left government in 2017 after being transferred from a position focused on climate change in the Arctic to the department’s office of revenue. He now does research and teaches at the John F. Kennedy School of Public Policy at Harvard University.

“Any administration is going to have a long road to get this back on track,” said Clement, who has been involved in conversations about restoring U.S. science with other experts informally advising the Biden team.

Dr. Ruth Etzel, EPA’s former head of children’s health, is still working at the agency, though she says she has been sidelined from her specialty under Trump.

A pediatrician with a focus on epidemiology and preventative medicine, Etzel was placed on administrative leave in 2018 after advocating more aggressive measures to prevent lead poisoning. She now works as a senior advisor in the office of water.

“I don’t have meaningful responsibility in office of water,” Etzel said. She said she hopes a new administration would let her share her expertise.

The Biden campaign hopes scientists who left come back to work for the federal government.

A campaign working group has been tossing around ideas for restoring scientific integrity on Zoom calls, including possibly creating a White House office focused on climate change, setting up nonpartisan oversight of federal scientific agencies, re-appointing scientific advisory panels and recruiting young scientists to federal jobs, according to advisers who were not authorized to speak publicly.

Such changes would be very welcome, said climate scientist Venkatramani Balaji, who is working as a laureate in the French “Make Our Planet Great Again” program, but kept his affiliation with Princeton University in the United States.

“At some point, science is going to be invited back to the table,” Balaji said. “As a community, we need to be ready for when that happens.”