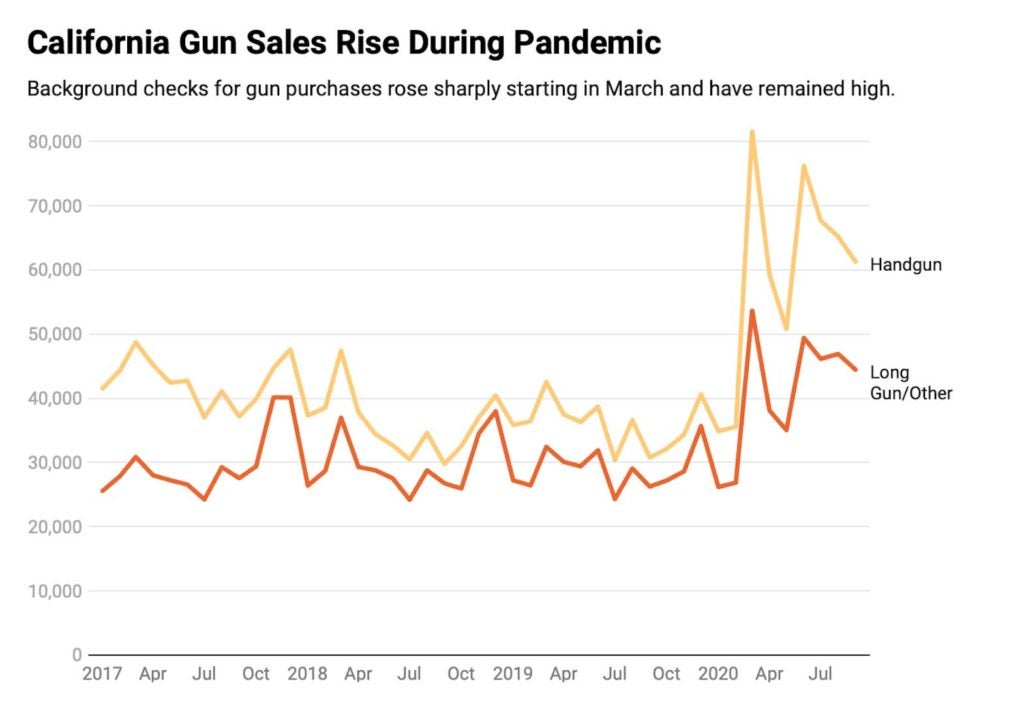 Handgun sales in California have risen to unprecedented levels during the COVID-19 pandemic, and experts say first-time buyers are driving the trend. Phillip Reese

The FBI conducted 462,000 background checks related to handgun purchases in California from March through September, an increase of 209,000, or 83%, from the same period last year. That’s more than in any other seven-month period on record.

People who study gun ownership think the increase means more people are buying guns for the first time. Handguns, as opposed to rifles and shotguns, are often the first firearm purchase made by someone looking for protection.

Background checks related to long gun or other gun sales also rose statewide, by 110,000, or 54%, from March through September compared with the same period in 2019. While that increase is steep, it does not match the rise in long gun sales seen in California during periods, often following mass shootings, when state leaders have considered legislation to sharply rein in access to military-style assault rifles.

In California, background checks for handguns and long guns correlate with gun sales, federal and state data show. Other states have purchasing systems that can result in a disconnect between background checks and sales.

Even so, the national numbers are startling: The FBI conducted about 7.7 million background checks related to handgun sales from March through September, an increase of 3.9 million, or 104%, from the same period in 2019.

Gun rights activists, gun control supporters and public health experts largely agree that the increase in gun sales is driven by fear, uncertainty and longing for a greater sense of protection.

Some Californians worry about dark fallout from pervasive unemployment and a faltering economy. Others are disconcerted by the angry and sometimes destructive protests over police shootings and pandemic lockdowns. The upcoming election has added to the unease. 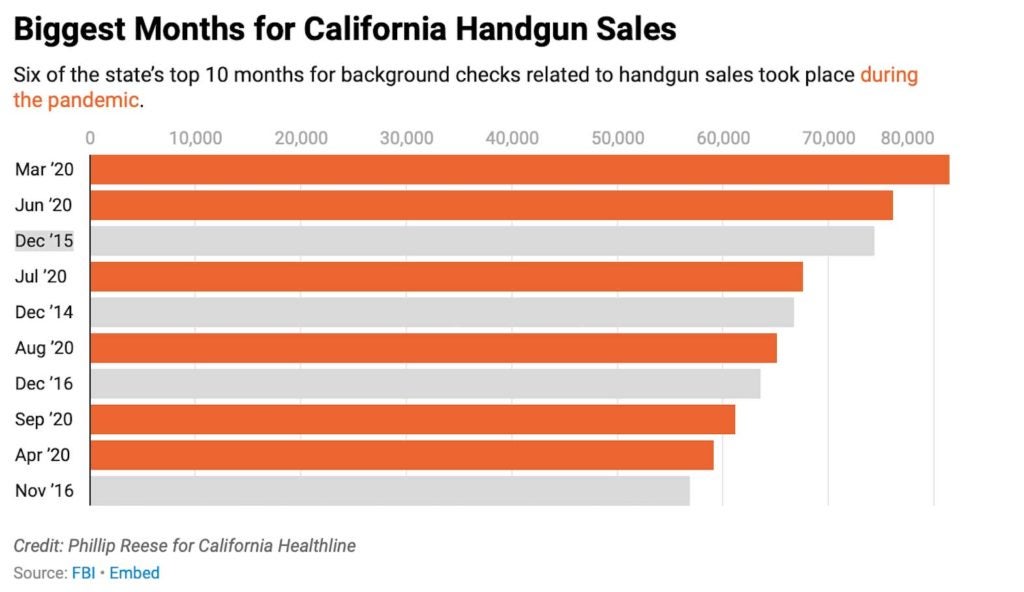 “Every dealer I know has a very low inventory of guns. They’re backlogged for months in filling orders because of this run on guns,” said Sam Paredes, executive director of Gun Owners of California, which advocates for fewer restrictions on gun purchases. “Every one of them, the first thing they say is, ‘Sam, you will not believe how many new gun buyers we have.’”

With about 3,000 firearm-related deaths occurring each year in California and 40,000 nationwide, gun ownership is increasingly viewed through the lens of public health. Several studies have drawn a connection between gun ownership and gun-related deaths.

Researchers at UC-Davis’ Violence Prevention Research Program said they are particularly concerned about the latest surge in sales, since many buyers appear to be introducing a gun into their home for the first time.

“There are obvious and well-documented risks associated with [going from] having no access to a firearm to having access to a firearm,” said Julia Schleimer, a data analyst with the UC-Davis program. “That extends to all household members, not just the person who owns the gun. And that’s for suicide, homicide, unintentional injury — basically for everyone, children included.”

Schleimer and her colleagues recently published a study examining the effects of the rise in gun sales during the pandemic. Using national data from the Gun Violence Archive, the study estimated that additional gun sales accounted for nearly 800 excess firearm injuries and deaths during assaults from March through May.

Recent FBI statistics show a rise in homicides and aggravated assaults, crimes often committed with guns, in large California cities and across the nation in the first half of 2020.

Dr. Garen Wintemute, director of the UC-Davis violence prevention program, is among the experts concerned about the connection between gun sales and a rise in domestic violence incidents as families have been forced to shelter together amid pandemic-related quarantines and shutdowns.

“If a firearm is involved, risk that intimate partner violence will have a fatal outcome goes up by a factor of five,” Wintemute said.

U.S. firearm suicide rates rose for several years leading up to 2020. Public health advocates fear that the mental strain of the pandemic combined with access to more guns will only exacerbate that trend.

“People have been cooped up and under tension with anxiety and depression,” said Dr. Bill Durston, president of Americans Against Gun Violence. “Adding a gun to that is like adding gasoline to a fire.”

Paredes said some dealers tell him more than 70% of their buyers are new customers. People “find themselves in a position where they’re thinking, ‘What might be the next step with the pandemic?’ That they might have to protect themselves in their own homes,” he said.

Even when the pandemic begins to taper off, Paredes expects the impact on gun sales to linger as first-time buyers become second- and third-time buyers.

“We will continue to see an increase,” he said, “because you’re going to have millions of people out there who are now going to experience guns.”

Phillip Reese is a data reporting specialist and an assistant professor of journalism at California State University-Sacramento.