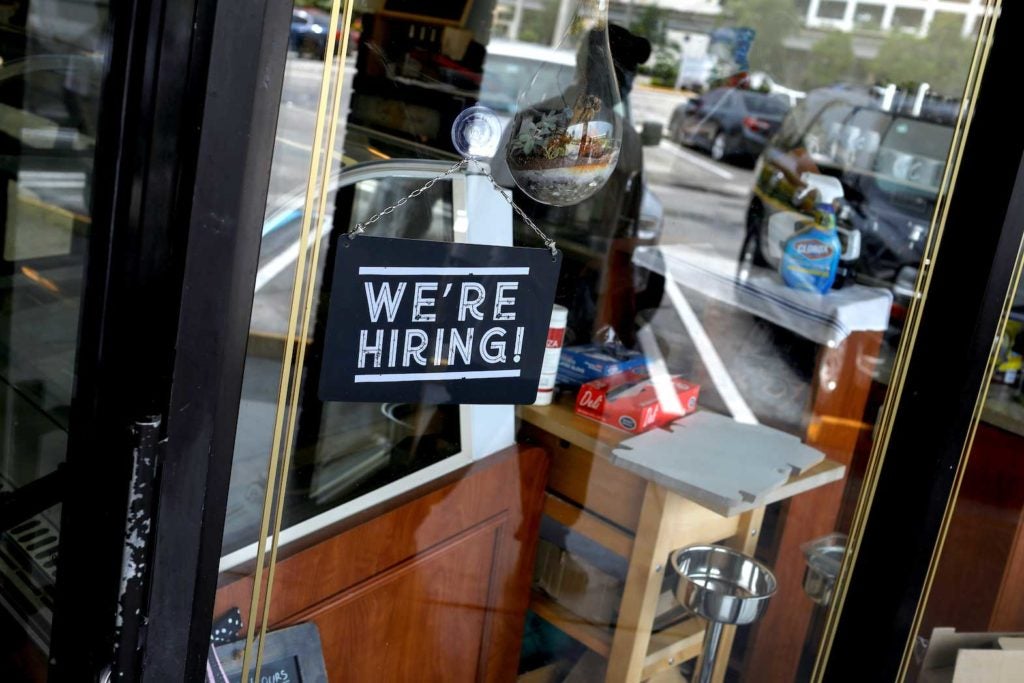 A “We’re Hiring” sign advertising jobs is seen at the entrance of a restaurant in Miami, Florida, U.S., May 18, 2020. REUTERS/Marco Bello/File Photo

The outlook for the U.S. economy has dimmed in the run-up to the presidential election, according to a Reuters poll which showed that a recent resurgence in novel coronavirus cases ran a high risk of halting the economic recovery.

New coronavirus infections have touched record levels in the United States recently, and the number of hospitalized COVID-19 Americans jumped to a two-month high, leading to further restrictions. In Europe, many countries have also reimposed measures to curb the disease’s spread.

A fast-rising case count and uncertainty about a fiscal relief bill drove the steepest U.S. stock market sell-off in a month, with the benchmark S&P 500 index posting its biggest daily decline in four weeks on Monday, flattening the U.S. Treasury yield curve.

Nearly two-thirds of 58 economists who responded to an additional question in the Oct 16-26 poll said there was a high risk that the U.S. economic rebound could be halted by the surge in coronavirus cases, including five who said it was very high.

“The pace of the recovery is already slowing as households and businesses are struggling with the impact of the lockdown and the virus,” said Philip Marey, senior U.S. strategist at Rabobank. “Meanwhile, the extension of the fiscal stimulus has yet to arrive, is late, and is likely to be modest.” 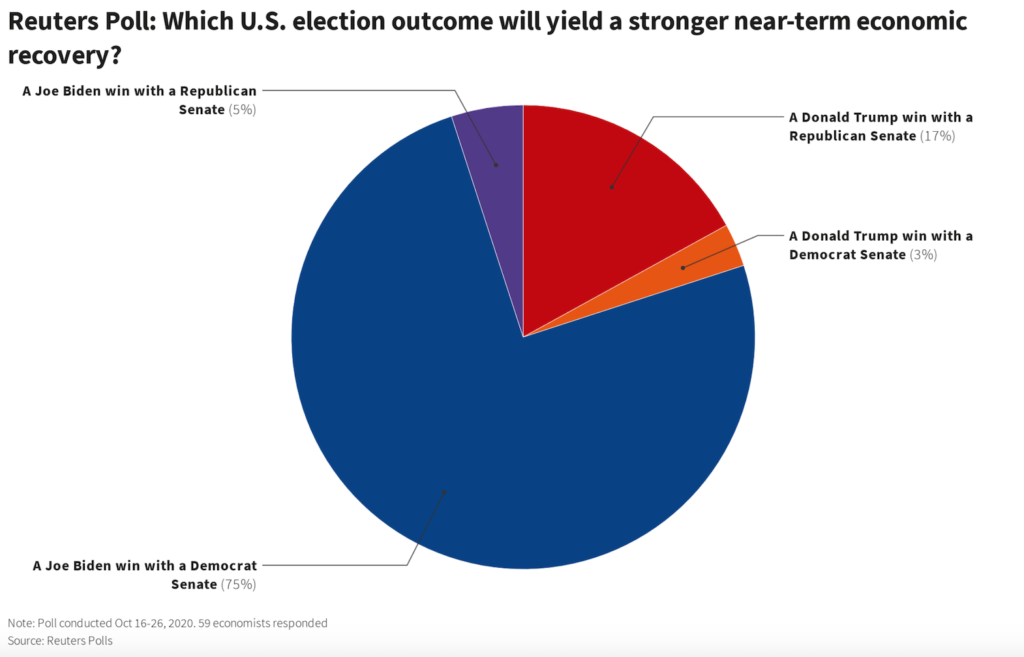 The result of the Nov. 3 U.S. presidential election, if available promptly, could swiftly end the gridlock on a second fiscal stimulus bill.

“The outcome of the election will likely dictate the trajectory for additional stimulus,” noted Michelle Meyer, head of U.S. economics for Bank of America Securities.

“A clear victory could accelerate stimulus negotiations. In the event of a contested election, the political environment creates a challenge for additional stimulus.”

Democratic control of the Senate, along with a win for the party’s presidential candidate Joe Biden, was predicted to yield a stronger near-term economic recovery, according to nearly 75% of 59 analysts who responded to an additional question.

But one of the biggest economic worries accruing from the pandemic is high unemployment. Over 80%, or 41 of 49 respondents, said the U.S. jobless rate would not return to pre-COVID-19 levels until 2023 at least, including two respondents who said it never would.

The economy contracted in the second quarter at an annualized 31.4% pace, its sharpest decline in at least 73 years. It is forecast to grow 4% this quarter after an expected record rebound of 31% last quarter.

But growth is now forecast to slow further during each quarter next year, and much more than predicted last month.

For this year, the world’s largest economy is forecast to shrink 4%, according to the poll of 120 economists.

Roughly two-thirds of respondents, or 41 of 62, said their forecasts were based on another round of fiscal stimulus.

Of the economists who expect more stimulus, the median was $1.8 trillion, within a $0.5-$3.5 trillion range.

“If markets sell off violently and the economic data deteriorate, we could see Washington facilitate the passage of stimulus even in a highly contentious environment,” added BofA’s Meyer.