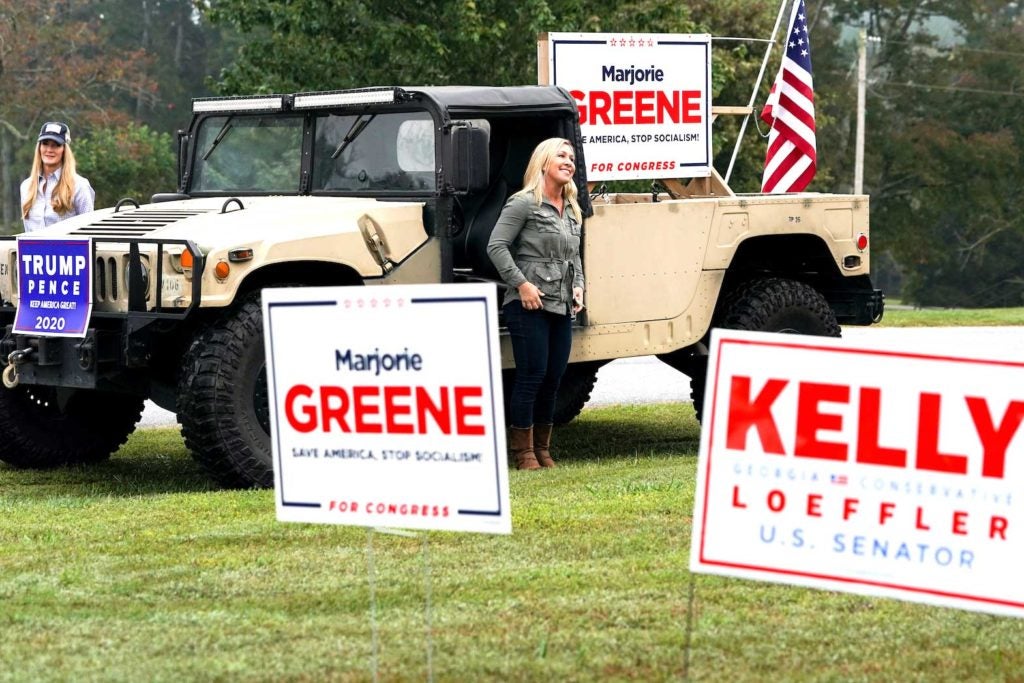 Right-wing small business owner Marjorie Taylor Greene, who declared in a 2017 video that “Q is a patriot,” is expected to win a House seat in rural northwest Georgia after her opponent dropped out.

WASHINGTON – The U.S. House of Representatives recently voted to condemn the pro-President Donald Trump online conspiracy theory known as “QAnon.” But multiple QAnon-friendly lawmakers may soon be taking seats in the House chamber.

More than two dozen candidates for Congress in the Nov. 3 elections have endorsed or given credence to QAnon or promoted QAnon content online, the non-profit watchdog group Media Matters says. Two are independents; the rest are Republicans.

At least one of them is expected to be elected to the House of Representatives next week, and a second has a good chance.

The unfounded conspiracy theory, which began in 2017 with anonymous web postings from “Q,” posits that Trump is secretly fighting a global cabal of child-sex predators that includes prominent Democrats, Hollywood elites and “deep state” allies.

Right-wing small business owner Marjorie Taylor Greene, who declared in a 2017 video that “Q is a patriot,” is expected to win a House seat in rural northwest Georgia after her opponent dropped out.

Gun-rights activist Lauren Boebert, who told a conservative podcast last spring that she hopes Q “is real,” has a good chance of winning her Republican-leaning district of western Colorado.

Both women are political neophytes who declare they want to go to Congress to “stop socialism.” After they won Republican primary elections in the summer, both sought to distance themselves from their previous statements about QAnon.

Trump invited both to attend his Republican National Convention speech at the White House in August.

After amplifying conspiracy theorists, social media platforms lately have been trying to crack down on QAnon’s sprawl, and the FBI has listed QAnon as a possible domestic terrorism threat. But a recent poll by Morning Consult said 38% of Republicans believe that at least parts of the QAnon conspiracy are true.

Trump has refused to renounce QAnon and even praised it as patriotic. He has frequently retweeted QAnon-linked content. Some Republicans, however, have publicly denounced the conspiracy theory.

A PLACE FOR GREENE?

“There is no place for QAnon in the Republican party,” House Republican Leader Kevin McCarthy told Fox News in August, becoming the highest-ranking Republican to publicly condemn QAnon.

But there will be a place for Greene among House Republicans. McCarthy said Greene should be given the chance to prove herself, once she is elected, because she had distanced herself from QAnon.

“She’s a small business owner, and she’ll be given an opportunity,” McCarthy told C-Span in August.

In the 2017 video about QAnon uncovered this year by Politico, Greene, 46, said: “There’s a once-in-a-lifetime opportunity to take this global cabal of Satan-worshiping pedophiles out.”

After winning her primary runoff in August Greene backtracked, telling Fox News that QAnon doesn’t “represent” her and “wasn’t part of my campaign.”

Boebert, 33, the House candidate from Colorado who has also spoken warmly about QAnon, wears a pistol on her hip in campaign photos. She defeated a five-term House Republican in a June primary after defying coronavirus lockdown orders by opening her restaurant.

Boebert’s restaurant is known as “Shooters Grill,” boasts of armed waitresses and is located in the small town of Rifle.

In a May conservative podcast, Boebert said of QAnon that “if this is real, then it could be really great for our country.” After her June primary victory, she backpedaled, telling a local television station that “I’m not a follower” of QAnon: “I’m not into conspiracies.”