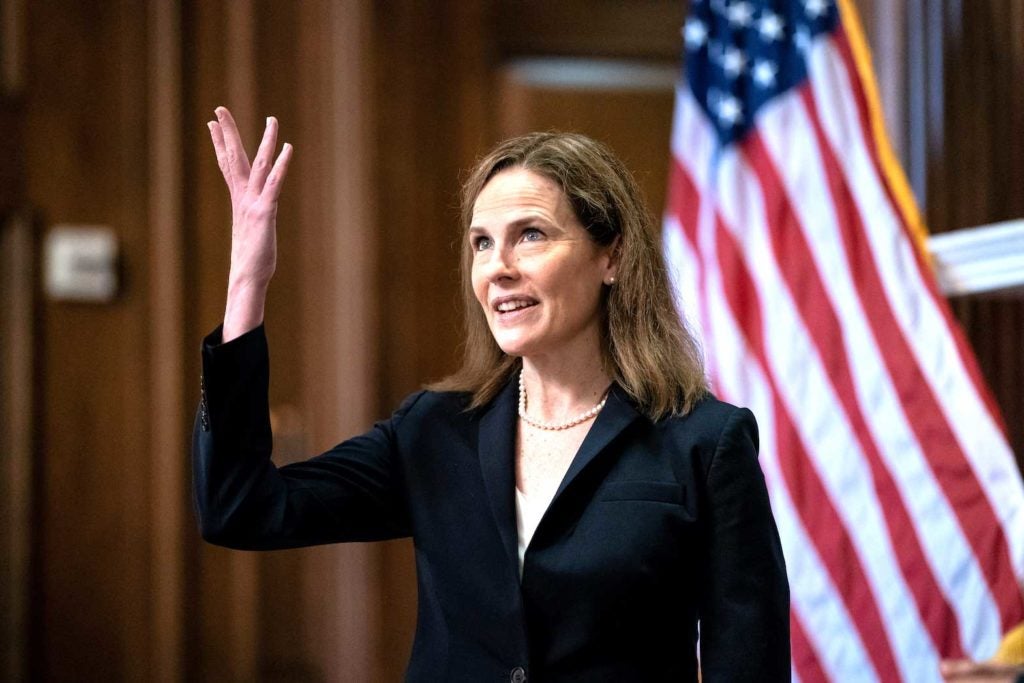 In her three years as a federal appeals court judge, U.S. Supreme Court nominee Amy Coney Barrett has consistently sided with police or prison guards accused of using excessive force, a Reuters review of cases she was involved in shows.

Barrett, Republican President Donald Trump’s third nominee to the high court, has written opinions or been a part of three-judge panels that have ruled in favor of defendants in 11 of 12 cases in which law enforcement was accused of using excessive force in violation of the U.S. Constitution.

The Republican-controlled Senate is expected to vote to confirm Barrett, a judge on the Chicago-based 7th U.S. Circuit Court of Appeals, to the lifetime position on Monday, cementing a 6-3 conservative majority.

While her Senate confirmation hearings focused attention on how she might rule on cases related to abortion, Obamacare and elections, the Reuters review illustrates Barrett’s record on police use of force at a time of reckoning in the United States.

There has been a wave of protests nationwide – and abroad – since May 25 when a Black man George Floyd died at the hands of a Minneapolis police officer, just one in a long string of killings that civil rights advocates say are evidence of racial bias in the criminal justice system.

“Her record also makes clear she is predisposed to side with law enforcement in the context of excessive force cases,” said Kristen Clarke, president of the Lawyers’ Committee for Civil Rights Under Law, which opposes Barrett’s confirmation.

Other groups that advocate for reform of the criminal justice system say she has written some encouraging rulings, with an overall record that is mixed. Barrett could not be reached for comment.

In five cases, the panel on which Barrett took part considered a request by police or corrections officers to be shielded from the lawsuits alleging excessive force through a controversial legal defense known as qualified immunity. The court granted those requests in four of the five cases.

A Reuters investigation published two weeks before Floyd’s death found that the immunity defense, created by the Supreme Court 50 years ago, has been making it easier for cops to kill or injure civilians with impunity. The report showed that federal appellate courts have been granting police immunity at increasing rates in recent years. Read the Reuters reporting here: https://www.reuters.com/investigates/special-report/usa-police-immunity-variations

Barrett, who was appointed to the appeals court by Trump in 2017, wrote a ruling in July that said Green Bay, Wisconsin officers who shot and killed a suicidal man who had threatened them with a knife did not use excessive force in violation of the Constitution’s Fourth Amendment, which prohibits illegal searches and seizures.

She was also part of rulings that overturned lower court decisions against Indianapolis police officers. In one, a federal judge had denied qualified immunity to officers in the case of shoplifting suspect Terrell Day, who died while handcuffed after telling officers he was having trouble breathing.

Barrett dissented from a 7th Circuit panel decision in 2019 to revive a lawsuit against prison guards at an Illinois prison for firing warning shots over a dining hall to help break up a fight, injuring several inmates.

She has also handled requests for qualified immunity outside of the excessive force context.

Barrett last year threw out a lawsuit by three Black men who sued Chicago cops for pulling them over while investigating a drive-by shooting near a school. The men, who had nothing to do with the shooting, said they were targeted because of their race, citing the “racialized nature of the mockery and threats” made by one of the officers. The driver, Marcus Torry, told the cops that he was complying because he feared police brutality.

Barrett granted the officers qualified immunity because it was not “clearly established” that the officers’ actions were unreasonable, noting that the plaintiffs matched the description of the suspects “in number, race and car color.”

In other cases, she has shown a willingness to side with plaintiffs.

In 2019, she wrote a ruling rejecting immunity for a police officer who used false statements in making the case against a murder suspect. She also joined a ruling denying immunity for officers who were accused of falsifying evidence that caused a man to be jailed for two years.

“I don’t think we can draw definite conclusions about how Judge Barrett would approach qualified immunity once she’s on the Supreme Court,” said Jay Schweikert, a policy analyst with the libertarian Cato Institute, which is campaigning against qualified immunity. “Her decisions all look like reasonable applications of existing precedent.”