Torchbearer Awards honors outstanding individuals for selflessly dedicating time and energy towards projects and activities that “enable the Filipino American spirit to thrive.” 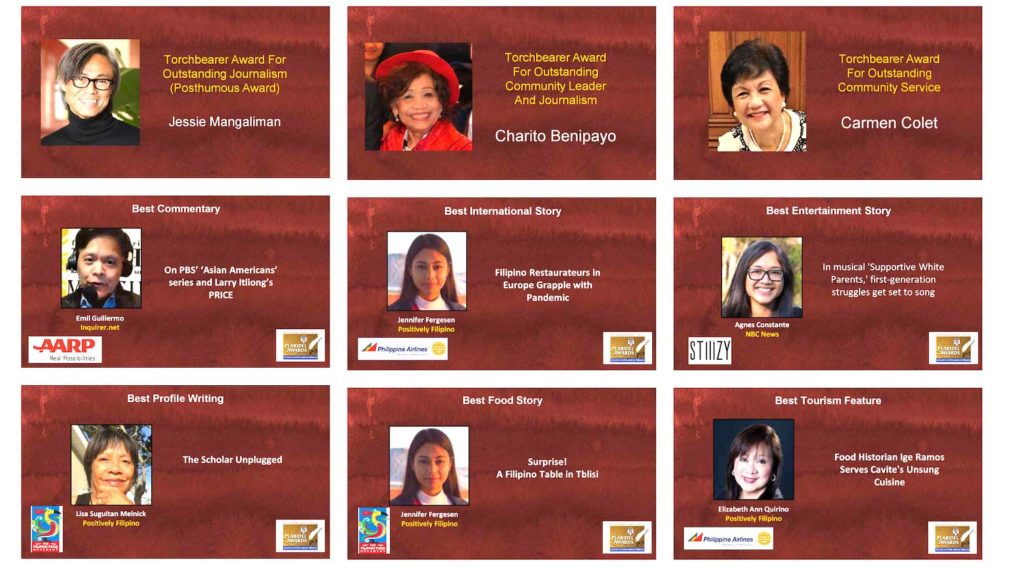 The 10th Torchbearer awardees are the following:

For Outstanding Journalism: Pulitzer Prize winner, Jessie Mangaliman (Posthumous Award). He worked for the San Jose Mercury News, New York Newsday, and The Washington Post. Mangaliman was nominated for a Pulitzer Prize for articles on AIDS and immigration for New York Newsday and was a member of the paper’s team that won the 1992 Pulitzer for breaking news for a midnight subway derailment. Lloyd LaCuesta, multi-awarded broadcast journalist, gave Jessie Mangaliman a heart stirring tribute.

The Torchbearer Award for Community Leadership was awarded to Carmen Colet, Chair of the San Francisco-Manila Sister City Committee and a Commissioner at the Asian Arts Museum of San Francisco. Through her, archived and new Filipino arts at the museum were highlighted, as well as cultural presentations during the Filipino American History Month. While in the Philippines, the SFMSCC was not limited to the arts but contributed funds and equipment, and fishing boats to victims of Cyclone Yolanda. She was introduced by Radi Calalang, Chair of SFKalayaan.

For Community Leadership and Outstanding Journalism, the recipient was Charito Benipayo, longtime media practitioner, and anchor of The Islander, Channel 38, and past president of the Philippine American Press Club USA (2004-2009). She founded the Bay Area Woman’s Club, a member of the General Federation of Women’s Club International the oldest women’s club founded in 1900. Benipayo continues to be involved with various community activities. She was introduced by Atty. Rodel Rodis, co-founder of the National Federation of Filipino American Associations.

Esther Misa Chavez, Chair and founder of The Plaridel and Torchbearer Awards said, “It’s a great privilege to be able to acknowledge and honor individuals and groups that make a difference in the lives of their compatriots and of the community at large by investing their time, brains and brawn to achieve their goals for the betterment of their community.”

The Plaridel Committee, Chavez said, has noticed how much stronger and bolder the submitted articles were compared to the past years, how aspiring journalists then have become polished writers and compete with veteran journalists now. “Indeed, the mission of The Plaridel is working and we are so proud and humbled.” She added that due to the proliferation of the use of social media as a platform for news – a new category was created called “New Media” for indeed it is a class all its own.

The 2020 Plaridel, excellence in Filipino American Journalism winners are the following:

TAYO NEWS is a digital news brand for younger Filipinos (Gen Z and millennials). It serves up content for the new generation of Filipinos across North America, focusing on uplifting, positive stories that make us proud of our heritage

BEST TV SERIES: Jannelle So/ So Jannelle/ JSP; shown on TFC and LA18

“Homeschool Mom Shares tips for home-schooling in time of Covid” is part of “So Cool” a segment that features Filipino and Filipino American with interesting hobbies, crafts, jobs which is a part of the TV series under “So Jannelle.” Joan Almedilla talks about her experience as homeschool mom. A segmen of SO JANNELLE

The Ocampo-Henry Memorial Award in Radio went to veteran radio host, Freska Griarte of 96.5 FM KOIT. The award honors Ness Ocampo who started his long radio career with Manila Bulletin’s DZBU in 1962 and brought his broadcasting passion to America in 1971 in particular to Northern California, Hawaii, Las Vegas and launch the FilAm Radio Network. Ness hosted the “Ness Ocampo Show” and “FilAms Now, FilAms Ngayon” which aired its last 12 consecutive years on KVTO 1400AM. He passed on in 2016.

Robert Henry was radio host of the “East-West Show which aired live from Las Vegas. In the short year and a half of his broadcasting career, he provided a unifying spirit by celebrating the diverse cultures within the growing Asian population in Nevada. He embraced new technology quickly and was able to successfully reach a worldwide audience exponentially. He died in 2014.

Recording of the proceedings can be seen at the website of the Philippine American Press Club USA at www.papcusa.org