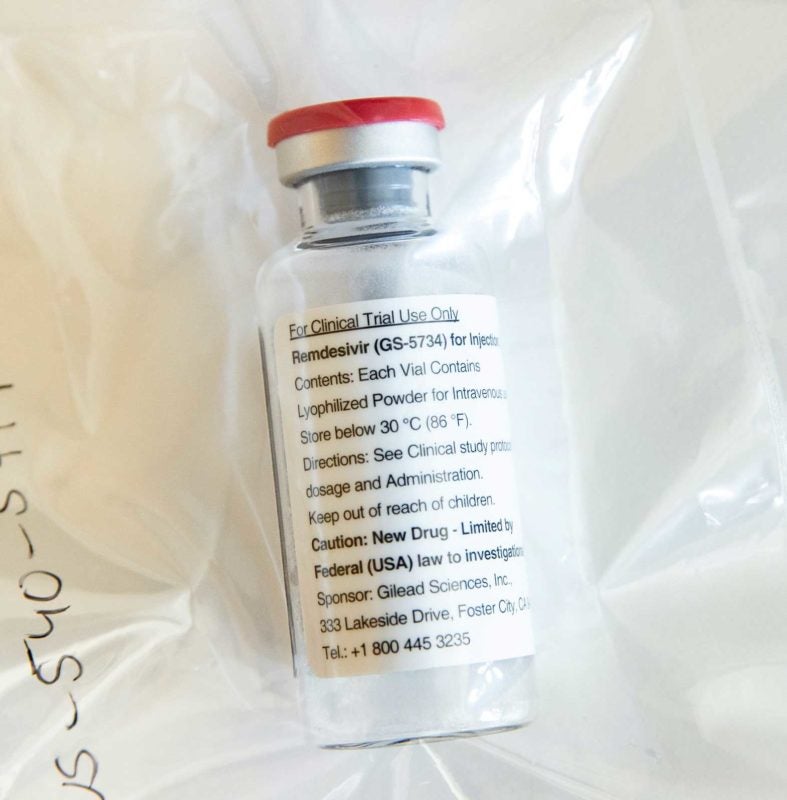 An ampule of Gilead Sciences COVID-19 antiviral remdesivir is pictured during a news conference at the University Hospital Eppendorf (UKE) in Hamburg, Germany, April 8, 2020, as the spread of coronavirus disease (COVID-19) continues. Ulrich Perrey/Pool via REUTERS

The U.S. Food and Drug Administration on Thursday approved Gilead Sciences Inc’s antiviral drug remdesivir for treating patients hospitalized with COVID-19, making it the first and only drug approved for the disease in the United States.

Remdesivir, given intravenously, was one of the drugs used to treat U.S. President Donald Trump during his bout with COVID-19.

The FDA’s formal approval comes just hours before the president’s final debate with Democratic rival Joe Biden ahead of the Nov. 3 presidential election.

Remdesivir has been available under an FDA emergency use authorization (EUA) since May, after a study led by the National Institutes of Health showed it reduced hospital stays by five days.

However, the World Health Organization (WHO) last week said its global trial of COVID-19 therapies found that remdesivir did not have a substantial effect on patients’ length of hospital stay or chances of survival. That study has not been reviewed by outside experts.

Gilead has questioned the potential for bias in the WHO study, which was not “blinded,” meaning that patients and their doctors were aware of which treatments were being used.

Remdesivir, which will be sold under the brand name Veklury, costs $3,120 for a five-day treatment course, or $2,340 for government purchasers such as the Department of Veterans Affairs. Shares of Gilead rose 4.3% in after hours trading to $63.30.

Remdesivir has become the standard of care for patients hospitalized with severe COVID-19 even though it has not been shown to improve survival. The drug also has not been proven to significantly help moderately-ill patients, and many doctors remain wary of using it in patients with less severe illness.

“The formal FDA approval doesn’t change our (sales) estimates or outlook for remdesivir given it has already been branded standard-of-care prior to formal approval,” Raymond James analyst Steven Seedhouse said in a research note, calling the prescribing guidelines and approval “pretty much a best case for Gilead,” given the WHO results questioning remdesivir’s benefits.

Gilead said it is currently meeting demand for the drug in the United States and anticipates meeting global demand by the end of October.

The company said Veklury has regulatory approvals or temporary authorizations in about 50 additional countries.

Also on Thursday, the FDA issued a new emergency use authorization for remdesivir to treat hospitalized pediatric patients under age 12 who weigh enough to receive an intravenous drug.

Gilead said it is still working to understand the full potential of remdesivir, in different settings and as part of combination therapy approaches. The company is also developing an inhaled version of the drug that might be used outside a hospital setting, if approved.

(Reporting by Vishwadha Chander in Bengaluru and Deena Beasley in Los Angeles; Editing by Cynthia Osterman and Bill Berkrot)