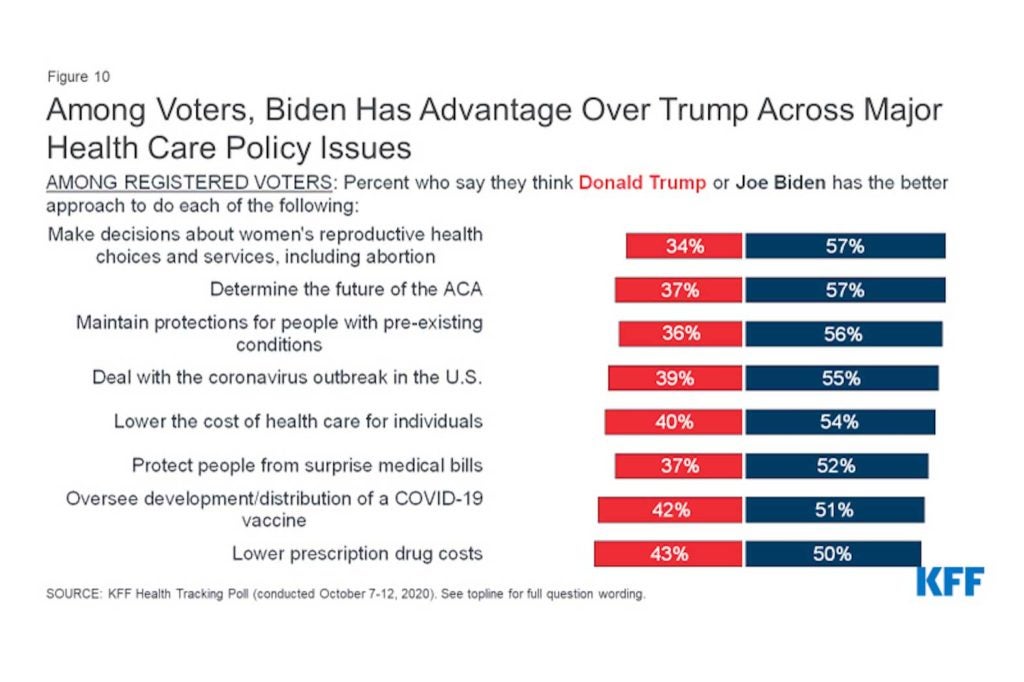 At least half of voters prefer Vice President Joe Biden’s approach to health care over President Donald Trump’s, suggesting voter concern about lowering costs and managing the pandemic could sway the outcome of this election, a new poll shows.

The findings, from KFF’s monthly tracking poll, signal that voters do not trust assurances from the president that he will protect people with preexisting conditions from being penalized by insurance companies if the Supreme Court overturns the Affordable Care Act. (KHN is an editorially independent program of KFF.)

Coming a month before the court will hear arguments from Republican attorneys general and the Trump administration that the health law should be overturned, the poll shows 79% of the public does not want the court to cancel coverage protections for Americans with preexisting conditions. A majority of Republicans, 66%, said they do not want those safeguards overturned.

In addition to leaving about 21 million Americans uninsured, overturning the ACA could allow insurance companies to charge more or deny coverage to individuals because they have preexisting conditions — a common practice before the law was established, and one that a government analysis said in 2017 could affect as many as 133 million Americans.

Nearly 6 in 10 people said they have a family member with a preexisting or chronic condition, such as diabetes or cancer, and about half said they worry about a relative being unable to afford coverage, or lose it outright, if the law is overturned.

The poll reveals a striking preference for Biden over Trump when it comes to protecting preexisting conditions, an issue that 94% of voters said would help decide who they vote for. Biden has a 20-point advantage, with voters preferring his approach 56% to 36% for Trump.

In fact, it shows a preference for Biden on every health care issue posed, including among those age 65 and older and on issues that Trump has said were his priorities while in office — signaling voters are not satisfied with the president’s work to lower health care costs, in particular. Support for Trump’s efforts to lower prescription drug costs has been slipping, with voters now preferring Biden’s approach, 50% to 43%.

A majority of voters said they prefer Biden’s plan for dealing with the COVID-19 outbreak, 55% to 39%, and for developing and distributing a vaccine for COVID-19, 51% to 42%. Trump has largely left it up to state and local officials to manage the outbreak, while promising that scientists would defy expectations and produce a vaccine before Election Day.

Asked which issue is most important to deciding whom to vote for, most pointed to health care issues, with 18% choosing the COVID-19 outbreak and 12% saying health care overall. Nearly an equal share, 29%, selected the economy.