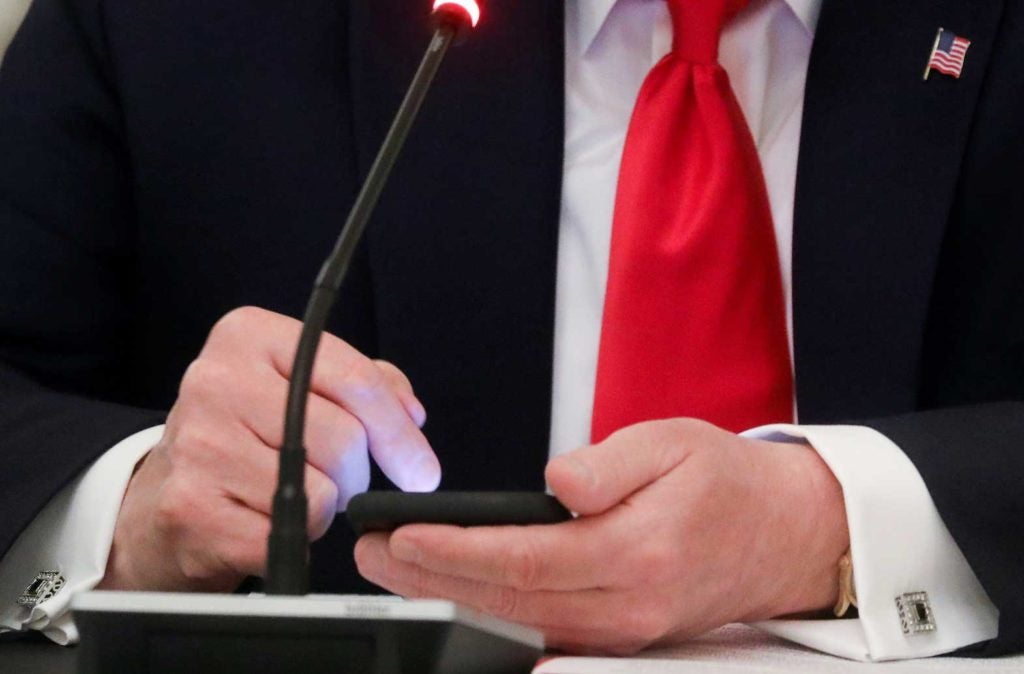 Twitter temporarily blocked the @TeamTrump account from sending tweets after it posted a video about Democratic presidential candidate Joe Biden’s son that it said violated its rules.

Twitter temporarily blocked the @TeamTrump account from sending tweets after it posted a video about Democratic presidential candidate Joe Biden’s son that it said violated its rules.

The video referred to a New York Post story from Wednesday that contained alleged details of Hunter Biden’s business dealings with a Ukrainian energy company and said the former vice president had met with an adviser of the company.

Biden campaign spokesman Andrew Bates said in a statement that Republican-led Senate committees have previously concluded that Joe Biden engaged in no wrongdoing related to Ukraine. He also denied such a meeting had taken place.

A Twitter spokesman said earlier on Thursday that the @TeamTrump account, and the accounts of White House Press Secretary Kayleigh McEnany and the New York Post, had been blocked from tweeting because of the company’s policies on hacked materials and posting private information. He said the accounts may need to delete the rule-breaking posts to continue tweeting.

“We will no longer remove hacked content unless it is directly shared by hackers or those acting in concert with them,” Gadde said in a tweet https://twitter.com/vijaya/status/1316923557268652033. “We will label Tweets to provide context instead of blocking links from being shared on Twitter.”

The Trump campaign, with 2.2 million followers, was sending tweets again on Thursday afternoon. It said in a new tweet it was “re-posting the video Twitter doesn’t want you to watch.” A Twitter spokesman told Reuters that the site would not take action as alterations to the video meant it no longer violated its policies.

“It’s going to all end up in a big lawsuit and there are things that can happen that are very severe that I’d rather not see happen, but it’s probably going to have to,” Trump said when asked about the move by Twitter.

McEnany likewise began tweeting again on Thursday, saying she regained access after deleting her post on the report.

Facebook reduced how often the story shows up in users’ news feeds and elsewhere on the platform, an action spokesman Andy Stone said the company takes temporarily pending fact checker review “if we have signals that a piece of content is false.”

Facebook did not respond to Reuters questions on whether its fact-checking partners were working on rating the Post’s story.

But Twitter’s Chief Executive Jack Dorsey tweeted on Wednesday “our communication around our actions on the @nypost article was not great. And blocking URL sharing via tweet or DM with zero context as to why we’re blocking: unacceptable.”

A Twitter spokesman declined to answer Reuters questions on whether Dorsey had been involved in the decisions on these restrictions on Wednesday or Thursday.

Republicans on the House of Representatives Judiciary Committee responded to Twitter’s actions by tweeting a link to a copy of the New York Post’s story on its website. Twitter blocked the link but later said this had been in error and reversed the action.

The @nypost has not tweeted in over a day, suggesting that they are still blocked from posting.

A spokeswoman for the New York Post declined to comment, other than referring Reuters to the Post’s own coverage.

Republican lawmakers slammed the social media companies’ actions on Thursday. U.S. Senate majority leader Mitch McConnell said the blocking of the story was “reprehensible” and that there should be no “speech police” in the United States.

Committee Chairman Lindsey Graham and Republican senators Ted Cruz and Josh Hawley said the committee will vote on sending the subpoena on Tuesday, Oct. 20 and plans to have Dorsey in front of the committee by Oct. 23.

Hawley also called for sending a subpoena to Facebook.

“We’re going to finally have an accounting that is long overdue,” Graham said. “This to me crystallizes the problem better than anything I could think of.”

The CEOs of Twitter, Facebook and Alphabet Inc’s Google are set to appear before the Senate Commerce Committee later this month at a hearing to discuss Section 230 – a legal immunity which offers tech companies protection from liability over content posted by users and enables them to act in “good faith” to remove objectionable content.

Pai said on Thursday the agency will move forward to set new rules to clarify the meaning of the provision.

The calls to reform Section 230 and penalize tech companies have been intensifying but it is unlikely there will be action on the law by Congress this year.

“There ought not to be any kind of a speech police in this country,” McConnell, speaking in Marion, Kentucky, said.

“I don’t think any monopoly … ought to be able to pick and choose who gets to speak.” He said he was sympathetic with the actions of several Republican senators, who are moving to subpoena Twitter’s Chief Executive Jack Dorsey in the matter.