Confessions of that fly 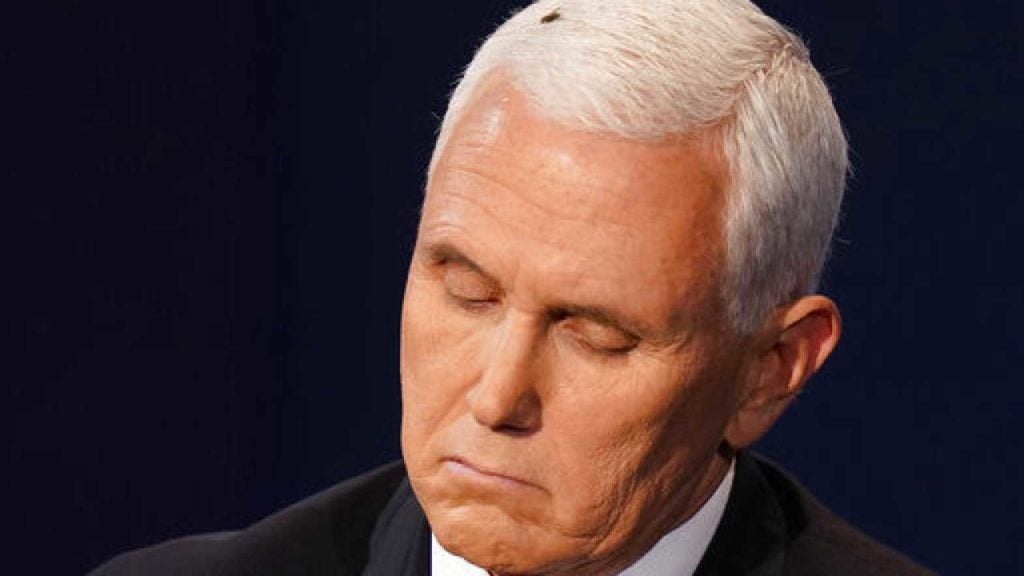 NEW YORK—There has been a lot of speculation as to the sudden and rather mysterious appearance of the common housefly at the vice-presidential debate between Kamala Harris, the Democratic challenger, and Mike Pence, the incumbent Republican.

As seen the world over, that fly alighted on the fleece-white cushion of Pence’s hair, and stayed grounded for a little over two minutes, apparently well aware of the time limit set by the debate moderator Susan Paige, who had a difficult time getting the two debaters, particularly Pence, to follow the rules.

Pence didn’t seem to notice the fly or betrayed any sign that he did. Perhaps he’s used to having flies alight on his silvery top on their way to wherever. Flies, contrary to popular belief, don’t fly on the fly.

My sources in the fly world were able to arrange an interview with the now world-famous fly to gather intel on the state of Pence’s mind. For understandable reasons, Mr. Fly, as I shall refer to him, preferred to remain anonymous. Here is the interview, edited for clarity.

INQUIRER: How did you get past the Secret Service?

Mr. Fly: You’ve heard the expression “fly on the wall”? Well, I was right there, hiding in plain sight.

INQ: Why Pence and not Harris?

MF: Easier to land and take off on that smooth head rather than getting entangled in Kamala’s locks. Besides, I wouldn’t have been noticed had I chosen her. I wanted to be seen, it isn’t every day you get to be on television.

INQ: What was that experience like and had you done it before?

MF: Oh, definitely. My colleagues and I use Pence’s head often. That pompadour is perfect for a smooth landing. In fact, the name we give it in our fly charts is exactly that: Pence’s Head. Besides, he has a certain odor that we flies are attracted to.

INQ: What would that be?

INQ: I get the idea. Have you since been tested for the virus?

MF: There’s no need. Viruses don’t care for us. Chump change, that’s how they look at us. You can actually take that mask off.

INQ: If you don’t mind, I’ll keep it on.[MF shrugs.] Picked up any information from Pence’s brain?

MF: Not much there, mostly talking points, quotes from the president, and his instruction to not answer any question, and interrupt when he could.

INQ: Have you spoken to the Pence campaign?

MF: I would like to, but his advisers seem to have taken offense at my intrusion and have formed a SWAT Team to track and assassinate me. With the latest in fly swatters, no less.

INQ: But the Vice-President didn’t seem to care.

MF: He couldn’t care less. You see, he’s so used to us he no longer notices when one of us comes in for a landing.

INQ: Have you thought of or tried landing on the president’s hair?

MF: I have and so have some of my fly boys. But while we love the smell of rot, that man is a different breed.

MF: Well, as I said, we do love the smell of rot, it’s the equivalent of smelling the roses, but, and this may come as a surprise to you and your readers, we have our limits. Trump’s rot is off the charts, too strong even for us. Besides, nothing much there, he’s an empty shell, to be honest.

INQ: The fly is a well-known insect in Japanese literature. How do you feel about that?

MF: You’re referring to my ancestors. Well, I’m understandably very proud of them, and of the fact that well-known haiku masters, Zen monks, wrote about them. Or us. What they wrote then still holds true today. Those of Issa are taught at fly schools. [Editor’s note: Issa was an early 19th-century poet and Buddhist monk, considered a master of the haiku form, along with Basho, Buson, and Shiki.]

MF: [Recites] “The flies in the temple,/ Imitate the hands / of the people with prayer beads.”

INQ: Are you guys in fact praying?

MF: You have to remember, Issa was a Buddhist monk, and it’s a lovely notion, the fly at his prayers. But it’s more secular than that: we’re actually rubbing our hands in glee, having located a source of food!

INQ: I notice you have been rubbing your hands and feet nonstop.

MF: Oh, Saturday Night Live is hiring me as a consultant! Enough in fees to fly me to the moon! And back!