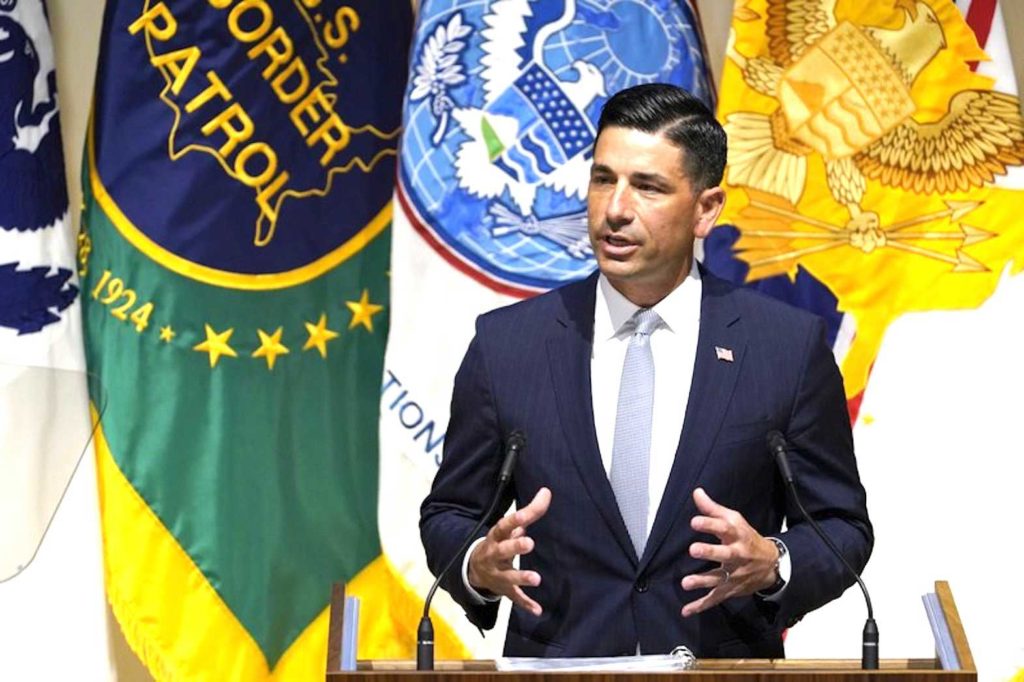 In this Sept. 9, 2020, file photo, acting Homeland Security Secretary Chad Wolf speaks during an event at DHS headquarters in Washington. The Department of Homeland Security has rolled out a series of immigration measures in recent days. The agency is helping to revive an issue that was at the heart of Trump’s successful 2016 campaign, but largely on the back burner in the current one. (AP Photo/Susan Walsh, File)

WASHINGTON — It had the ingredients of a President Donald Trump campaign speech: dangerous immigrants, attacks on Democrat-run cities, even a mention of “America First.”

But it was Chad Wolf, acting secretary of the Department of Homeland Security, announcing a routine, and relatively minor, enforcement operation Wednesday at a Washington news conference.

Yet it was the third time in a week the administration rolled out actions to appear tough on immigration, reviving an issue that was at the heart of Trump’s successful 2016 campaign, but largely on the back burner in the current one. And it added to charges from Trump critics that DHS and other agencies have become overtly politicized under this president.

DHS, which was created to improve America’s resistance to external threats following the Sept. 11 attacks, has been a tool of key Trump administration policies from the start — enforcing stricter immigration policies, building the border wall and, most notoriously, separating families apprehended trying to enter the United States.

Its political role has increased in recent months, with the decision to deploy DHS tactical agents to Portland, Oregon, to confront protesters outside the federal courthouse without the consent of local authorities as part of Trump’s “law and order” campaign theme.

“His modus operandi for the vast majority of the administration has been to use DHS to benefit him politically,” said Miles Taylor, who served as the agency’s chief of staff from 2017-19. “Now, he’s trying to use the department to benefit himself electorally.”

Few issues are as important to Trump’s political base as immigration. His get-tough approach and promise to build a border wall were cornerstones of his 2016 campaign. But attention to the issue has ebbed in the 2020 race, as Trump has focused more on unrest in Democratic cities, leftist activists and other matters.

But the effort to rekindle the anti-immigration fervor has gained steam.

In recent weeks, the administration has announced time limits for students to complete their studies, requirements for additional biometrics and even DNA in some cases to get immigration benefits and a new rule for immigrant sponsors to submit years of credit reports, bank statements and other financial information.

Immigration and Customs Enforcement, a component of DHS, posted five billboards across Pennsylvania, a battleground state, with images of migrants charged with criminal offenses whom the agency was seeking to arrest. The campaign is rare, if not unprecedented.

Last week, the administration announced it has proposed further slashing the number of refugees the United States accepts to a new record low in the coming year. On Tuesday, DHS and the Labor Department said new rules would significantly reduce the number of visas issued to skilled foreign workers, a move welcomed by groups that favor cutting legal immigration into the United States.

Then Wolf followed up with the news conference to announce the enforcement operation — a fairly routine operation that resulted in a fairly low number of arrests. “It’s a worrying abuse of power,” said Taylor, who has endorsed former Vice President Joe Biden in the Nov. 3 election.

The acting secretary, whose nomination is pending before the Senate, said his intention was to highlight the threat posed by cities and states that provide “sanctuary” to migrants in the country illegally by not turning them over to ICE for deportation.

But it just so happens that it tends to be cities and states run by Democrats that provide sanctuary, with local officials arguing that assisting with immigration enforcement discourages crime victims in the country illegally from cooperating with law enforcement on more serious matters.

Wolf says it’s dangerous not to turn them over to ICE, noting that some of those captured in the operation had committed serious crimes such as homicide and sexual assault.

“ICE focuses its limited resources first and foremost by targeting those who pose the greatest threat to public safety,” he said.

Still, his mere presence at the news conference was unusual.

“The fact that Chad Wolf thought that attending a press conference on a modest enforcement action was the best use of his time today shows that he is still hell-bent on politicizing the department’s mission in order to help the President in his reelection campaign,” said Rep. Bennie Thompson, a Mississippi Democrat who is chairman of the House Homeland Security Committee.

Rep. Zoe Lofgren, a California Democrat, sent a letter to the acting director of ICE, Tony Pham, demanding answers about the operation. “I am deeply disturbed that ICE is spending government dollars and putting lives at risk in furtherance of what is described as a political messaging campaign,” she said.

Since Trump came into office, ICE has conducted targeted raids in sanctuary cities focused on people convicted of crimes in the United States or with pending charges. After a pause at the start of the pandemic, the agency appears to have dialed up the operations.

Trump has said Biden wants to abolish ICE and end deportations, but that’s not correct. The former vice president has argued that crossing the U.S. border illegally is a crime and should remain punished as such in federal court. A committee of advisers has proposed a 100-day moratorium on deportations, but Biden hasn’t endorsed the idea. President Barack Obama’s administration also aggressively deported people.

In the recent California operation, about 130 people were captured in the five days leading up to Oct. 2. Last month, ICE marked similar operations in Los Angeles, Chicago and Charlotte, North Carolina, with little fanfare — just news releases on its website.

Wolf said that there would be additional sweeps soon in other U.S. cities, without providing details.