Trump says getting Covid was ‘a blessing from God’ 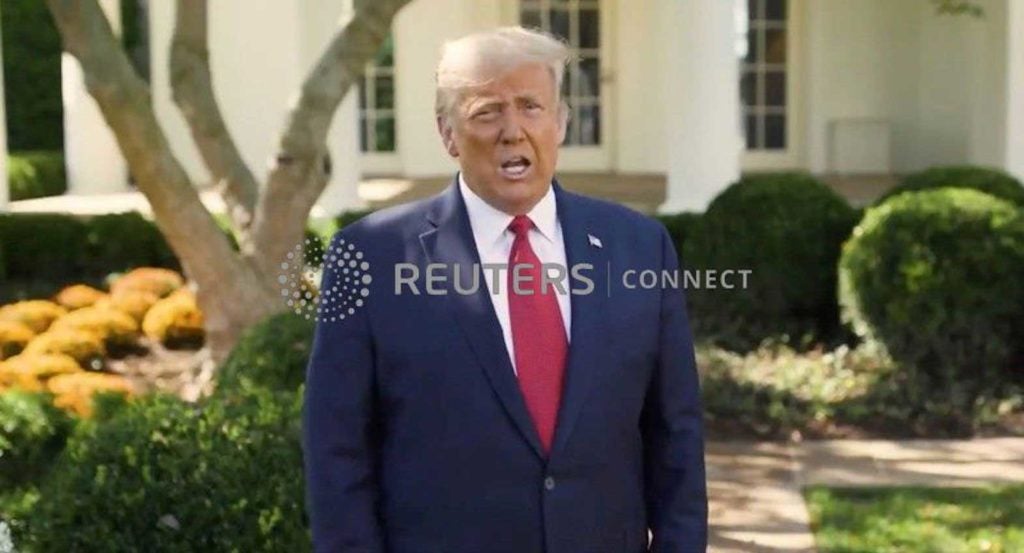 WASHINGTON – U.S. President Donald Trump declared that catching the coronavirus was a “blessing from God” that exposed him to experimental treatments he vowed would become free for all Americans, in a video address released on Wednesday.

Trump, eager to revitalize his ailing re-election campaign two days after his release from Walter Reed military hospital, repeatedly stressed how well he felt so far in his recovery from COVID-19, the disease caused by the coronavirus. It was unclear if he was still testing positive for the virus.

“I think this was a blessing from God that I caught it. This was a blessing in disguise,” Trump said, adding that his use of the medication from Regeneron Pharmaceuticals Inc <REGN.O> had allowed him to experience first-hand how effective it could be.

Trump, who has been widely criticized for a slow response to the pandemic that has killed more than 210,000 Americans and putting his own staff at risk by discouraging the use of masks in the White House and on the campaign trail, also cited similar medication from Eli Lilly and Co <LLY.N>.

“I want to get for you what I got. And I’m going to make it free,” Trump said, at one point calling the unapproved medicine a “cure.”

The timing of the video’s recording was unclear. Trump said in the message that he had gotten back to the White House “a day ago,” suggesting he was speaking on Tuesday. But Trump’s chief of staff, Mark Meadows, said the video was recorded earlier on Wednesday.

The video’s release followed White House assurances that the 74-year-old president was back at the Oval Office on Wednesday, getting briefed about economic stimulus talks and Hurricane Delta.

A White House official said Trump entered the office from the Rose Garden to avoid walking through the White House hallways and possibly exposing others to the coronavirus.

Trump had been in his residence in the White House since his dramatic made-for-video return from Walter Reed in a helicopter on Monday night.

Trump, who faces Democrat Joe Biden in the November election, has had no COVID-19 symptoms for the past 24 hours, his doctor Sean Conley said in a statement.

“He’s now been fever-free for more than four days, symptom-free for over 24 hours, and has not needed, nor received, any supplemental oxygen since initial hospitalization,” Conley said.

Despite his illness, Trump has been looking for ways to get his election message out and cut into Biden’s lead in battleground states, advisers said. His video message appeared to be a step in that direction.

A speech to senior voters is being contemplated for Thursday, they said.

Aides say Trump is impatient to get back on the campaign trail and insistent on going ahead with the next debate on Oct. 15 in Miami, but Biden said on Tuesday he will not participate if Trump is not virus-free.

The new claim on free medications came the day after Trump abruptly ended talks with Democrats on a new round of stimulus for a pandemic-pounded economy, with both sides far apart on how much money to devote to a deal.

Both Biden and the top Democrat in the U.S. Congress, House Speaker Nancy Pelosi, accused Trump of abandoning needy Americans.

With layoffs in key industries mounting by the day and threatening the fragile recovery, Trump late on Tuesday urged Congress to quickly pass $25 billion in funding for passenger airlines, $135 billion for small businesses and provide $1,200 stimulus checks for Americans.

But White House officials on Wednesday downplayed the likelihood of any kind of stimulus being passed before the election.

Trump’s drive to get Judge Amy Coney Barrett confirmed to the vacant seat on the Supreme Court by the Republican-controlled Senate before the election also may be in doubt, since three Republican senators infected with the virus may not be able to vote.

A wave of infections at the White House among Trump’s top lieutenants and press aides has left the West Wing struggling to find its footing. At least 19 people close to Trump have tested positive.

Trump has depicted himself as a man who vanquished the disease and emerged stronger, telling Americans not to be afraid of COVID-19.

The latest Reuters/Ipsos poll, conducted Oct. 2 to 6, found that 38% of adults approved of Trump’s handling of the coronavirus, while 56% said they disapproved.

In a withering editorial, the New England Journal of https://www.nejm.org/doi/full/10.1056/NEJMe2029812Medicine accused America’s leaders of an astonishing degree of failure over the COVID-19 crisis that “turned it into a tragedy.”

Although Trump long defied experts by holding out the possibility that a vaccine might be available before the election, he acknowledged in his video message that a vaccine would be out after the ballot because of “politics.”

Advisers say Trump wanted to be talking about other issues instead of the virus by this stage of the campaign, to put pressure on Biden. Opinion polls show Trump down double digits, and Biden with sizeable leads in many swing states.