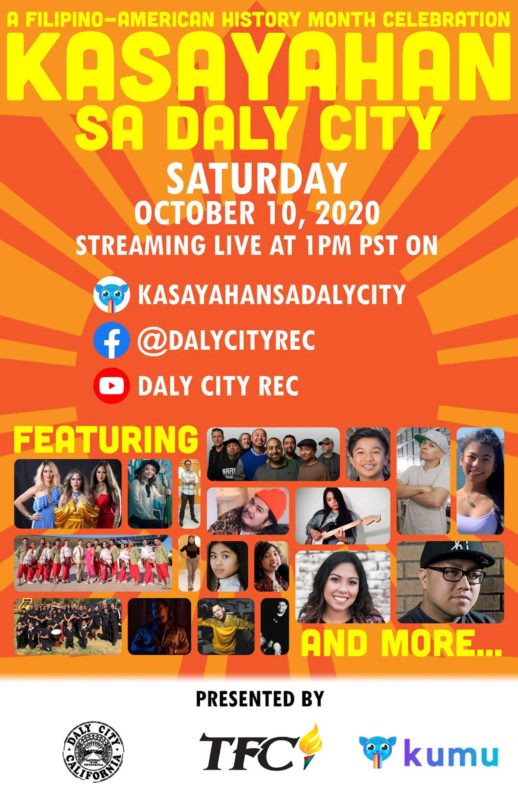 The local government of Daly City in partnership with TFC will bring the city’s celebration of Filipino American History Month, Kasayahan sa Daly City, beyond its municipal borders on Saturday, Oct. 10, 2020. It will be seen on Daly City Recreation’s Facebook page, on their YouTube channel and on the Kasayahan sa Daly City account on the Kumu app.

Global Corporate Affairs and Strategic CSR Head Nerissa Fernandez, together with Product Lead for Kumu Karen Ann Cervantes and Content Lead for Kumu Tippy Benedito, sealed the effort to put Kasayahan on Kumu, a powerful livestream platform, which will bring the voices of over 100 million Filipinos from all over the globe at the forefront.

Daly City Senior Recreation Services Supervisor Romeo Benson says that aside from their longstanding relationship with TFC, they “are absolutely excited about the partnership with Kumu. This gives us the opportunity to try and learn something out of the box.”

According to Kumu Chief of Staff James Kumohr, “This event allows our users to feel connected to their family and friends back in the States.” Kumohr adds that “With over seven million users that downloaded the app in over 55 countries, Kumu provides a specific audience of users who love Pinoy (Filipino) culture.”

The line-up of performers features talents from Daly City and the Bay Area: MelvinSings!, Jenn Clemena, and Native Elements all from Daly City and South San Francisco; Kariktan Dance Company and The Company, considered to be two of the best dance groups in California; and other guest performers.

DJ Qbert will perform a scratch set and there will be an exclusive look at the movie “Lumpia 2 with a Vengeance,”  which was filmed in Daly City.

Several other performances and demos will be featured, to be capped by the popular Filipina vocal group One Vo1ce, known for its hit “When you Think About Me,” which reached Billboard’s Top 100 in 2000. The event will be hosted by Adobo Nation’s Tet Hernandez and JC Gonzalez.

Be part of the festivities on October 10, Saturday, starting at 1:00 P.M. (Pacific) on Daly City Recreation’s Facebook page, on their YouTube channel and on Kasayahan sa Daly City account on the Kumu app.