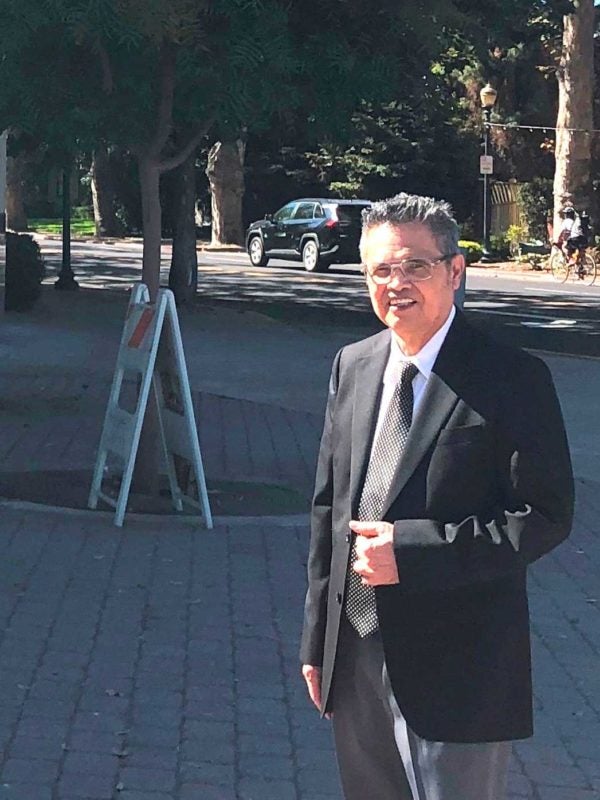 Lawyer-accountant-entrepreneur Chris Lozano is vying for a seat in the City Council of Hayward.  CONTRIBUTED

HAYWARD, Callifornia — A Filipino American hopes to make history Nov. 3 in his adopted home city by becoming its first City Council member with roots in the Philippines.

For 15 years, Crispin Lozano has resided in Hayward, California, where he also practices his multiple professions. He is a lawyer, accountant and entrepreneur — a triple threat or a Renaissance man, depending on whose eyes are assessing the Paete, Laguna native.

Though he settled down on the morning of the new millennium in the Northern California town that sits precariously over its namesake fault line, he actually began his American journey in 1987, when he lived in Bellflower and then Cerritos in Los Angeles County.

His 33 years in the United States have enriched him with experience in the academic and corporate sectors, as a newcomer, taxpayer and homeowner, hence his desire to have a direct hand in governing his town.

While the pandemic continues to wreak havoc on the world’s health and economy, the unprecedented crisis, at least in his microcosm, has sparked the 72-year-old’s political aspiration.  From his view, his city could have avoided the situation it finds itself in had it taken progressive strides long before the coronavirus reached its borders.

“I am running for City Council because we cannot afford another four years of status quo in the City Council,” Lozano tells Inquirer.net. “This Covid -19 pandemic created the worst unemployment, bankruptcies and homelessness in Hayward history.  We need to act now.   We need to create jobs for the residents to support our local government.   We are experiencing a housing, economic and social justice crisis.”

Clearly he is dissatisfied with his local officials, whom he chides for stagnation and lack of leadership.

“Hayward has not moved forward for the last 10 years.  The same housing crisis, homelessness and poverty have prevailed.”

If elected, he says he would expand affordable housing and rent control.  Construction of affordable housing would create jobs, he contends, proposing tax incentives to companies in critically population-dense San Francisco and San Jose to establish facilities in his Alameda County city.

He would tackle public safety and improve the response time to emergency calls and increase police training.

The issue of racial discrimination is personal to the head of a racially diverse family.

“I support Black Lives Matter,” declares the grandfather to bi-racial and bi-Asian children.  He says he would “eliminate discrimination with community assistance in policing.”

Who exactly is this candidate and what makes him think he has what it takes to drive his Sand Francisco Bay Area city?

A “student of life” perhaps best sums up the self-made man. 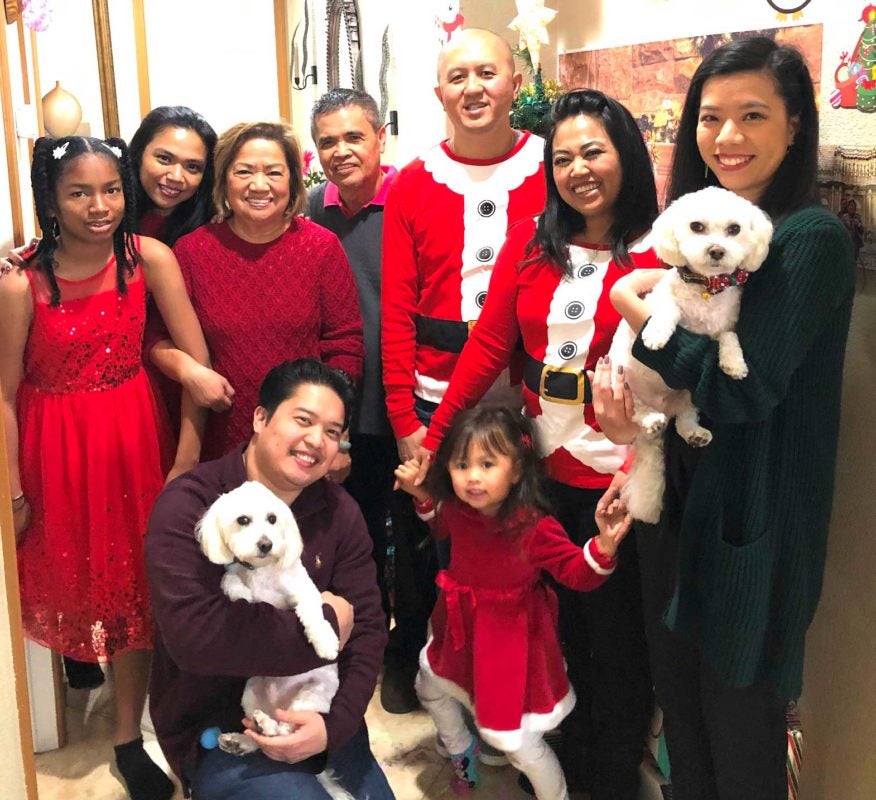 If Crispin Caday Lozano sounds dauntless, it’s because he has faced and overcome hardship since he was born in the Philippine town known for its intricate wood carvings.  From the Ilocos Region north of Luzon, Lozano’s parents built their lives in Laguna, home of Philippine National Hero Jose Rizal.

His father, Braulio Roger Caday, was a carpenter.  His mother, Teofila Pilar, was a housewife.

“I was born and raised in a very poor family,” he says with pride, having learned the value of hard work, devotion to family and creativity that shaped his future.

His parents were unable to give him and his three siblings an allowance, so he became an “agent” for the neighborhood bakery, peddling bread as a schoolboy.  In high school he whittled wood into figurines that a wholesaler vended in tourist spots in Manila.  Enterprising, he was.

Lozano was a “get” to corporations including Mariwasa, where he was chief accountant.  While his career was flourishing, the social and political situation was deteriorating in the early 1980s.

After his sister had immigrated to California and petitioned for their parents to join her, he, too, took a giant leap and with his wife reunited with them in 1987.  Once again, he began pursuing the limitless possibilities he had envisioned back in his native land.

Starting as a tax preparer, Lozano earned his CPA license from Colorado and joined the accounting department of the Los Angeles Unified School District.

In Southern California, Lozano would hear people discuss immigration matters that he found fascinating.  Acquaintances would approach him to help understand the process, leading him to a side job with a lawyer-friend.  At some point the lawyer “convinced” him to study law, an objective he realized in three years at  Western State University in Fullerton, California.

How Lozano wound up in Hayward is another example of his business savvy.

He noted that many of his legal clients resided further north of the Grapevine, or the gnarled 5 Freeway connecting Southern California to San Joaquin Valley in Central California.

“They said they didn’t know of any Filipino lawyers in the Bay Area,” Lozano repeated his Northern Californian clients’ plaint that stirred his incredulity but prodded him to check out the lay of the land for himself.

Across the southeastern tip of the San Mateo Bridge, Hayward is sandwiched between Union City and San Leandro.  The city’s website touts its numbers:  “17,500 or 10.8% of residents both live and work” there, where the median price for a single family detached home is $630,000.

The fact that the Hayward Fault yawned beneath their feet did not seem too much of a concern to the 159,000 residents last estimated prior to this year’s census.

What Lozano found was a “welcoming” city east of the bay where “rent was low” so he could set up his practice in 2005. That Cal-State Hayward renamed itself Cal-State East Bay suggests the city has yet to acquire its image as a booming locale.  Certainly its richness comes from its high concentration of people of color, predominantly Latinos who comprise 40.7% and Asian-Pacific Islanders 25.1%.  Whites number 34.2% and Blacks 11.9%  Filipinos make up under 10 percent of the population The 6-member City Council mirrors the city population.  The current Mayor, elected at large, is white.

There were few Filipinos practicing law, unlike across the bridge in the counties of San Mateo and San Francisco.  Lozano saw a niche waiting to be carved.

Lozano figures that this is the time for local Fil-Ams to organize seriously and get in the political mix like their neighbors.  The aspirant who identifies as a social progressive and fiscal conservative says he has invested at least $20,000 to his campaign.  He has a support network of Fil-Ams and Latinos, including former clients who have benefited from his pro bono service, who are helping him get the word out about his plans and why he deserves to be elected.

He has reached out to Pat Gacoscos, the first Fil-Am woman elected to the City Council of Union City, to effect the change he longs to see.

Gacoscos articulates her support:  “First, he is a hardworking person who rose to become a successful lawyer and accountant through hard work and determination.  He will work hard to meet the needs of his constituents.  Second, the City of Hayward is becoming so diverse; a large city with growing Asian/Filipino population, that someone like Chris Lozano should give them a voice  in the City Council.”

A pioneer in many respects, the former teacher Gacoscos empathizes with her fellow Fil-Am.

“As an immigrant, lawyer and businessman, Chris understands the variety of needs in employment, housing, education and public safety.  He will be an excellent addition to the Hayward City Council and I look forward to work with him in regional issues affecting our two cities.”

“We Filipino Americans need to get united and coalesce with our Latino friends.  Together we will develop affordable housing, create jobs, prioritize public safety and eliminate discrimination,” says the dreamer from Paete who has reached all his goals.  So far.