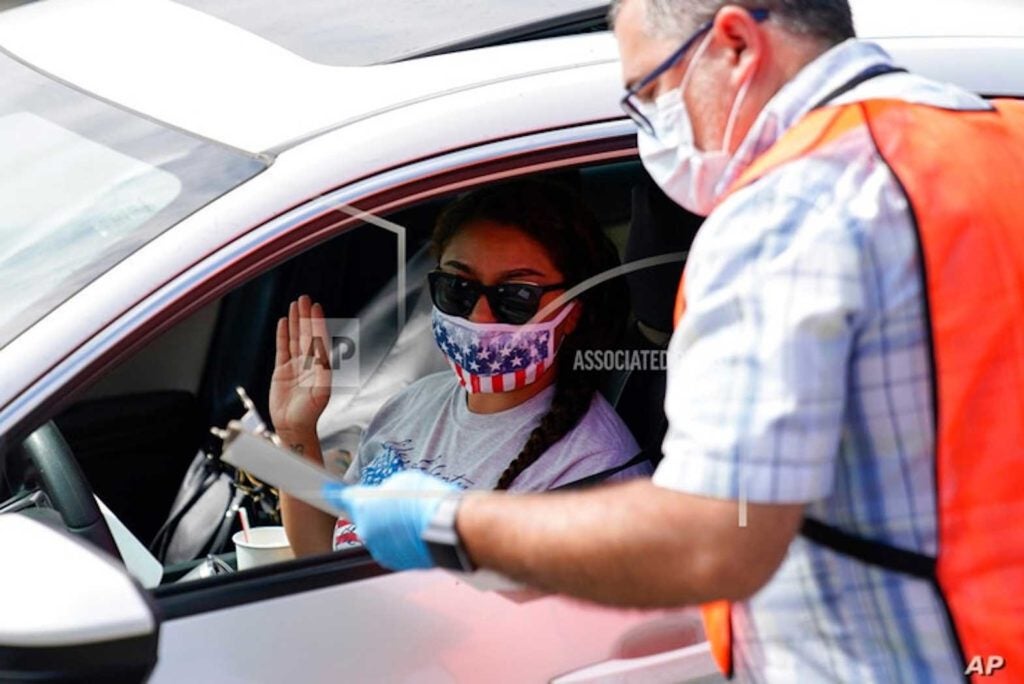 In this June 26, 2020 photo, Vida Kazemi is sworn in as a U.S. citizen by Allen Chrysler, immigration services officer, during a drive-up naturalization ceremony in Laguna Niguel, Calif. AP

A U.S. federal judge on Tuesday blocked an increase in immigration fees that was due to go into effect this week.

The fees were set to go up Friday by an average of about 20% depending on the type of entry being sought.

The halted hikes include a $50 fee for asylum applications, the first time the United States would have charged such a fee.  The cost for applying to be a naturalized citizen was due to increase from $640 to $1,170.

Applicants from lower-income households have been able to ask that their fees be waived, but the new rules that were due to go into effect eliminated certain categories of waiver eligibility, such as showing extreme financial hardship. Some applicants would no longer have been eligible under tighter household income thresholds.

U.S. Citizenship and Immigration Services, the agency that processes visas, asylum requests, naturalizations and other applications, reported a sharp decline in revenues earlier this year due to the coronavirus pandemic and at one point considered furloughing more than half its staff. Unlike most federal agencies, a significant portion of USCIS’s funding comes from fees collected.

U.S. District Judge Jeffrey White wrote he based his injunction on several factors.  He said the Trump administration did not adequately follow procedures for making new rules, including failing to consider the impact of the higher fees on low-income applicants.

White also agreed with arguments presented by the plaintiffs, a group of eight non-profit groups that work with low-income immigration applicants, who said the acting heads of the Department of Homeland Security had been improperly elevated to their roles at the time the new rules were issued.

Plaintiffs in other federal immigration cases have made the same argument about Kevin McAleenan, who was named acting head of the Department of Homeland Security last year before resigning in November, and Chad Wolf, who succeeded him as acting chief.

The defendants argued the appointments were valid. But Judge White ruled the plaintiffs are “likely to succeed” on the claim that neither McAleenan nor Wolf were validly serving as acting Homeland Security secretary.