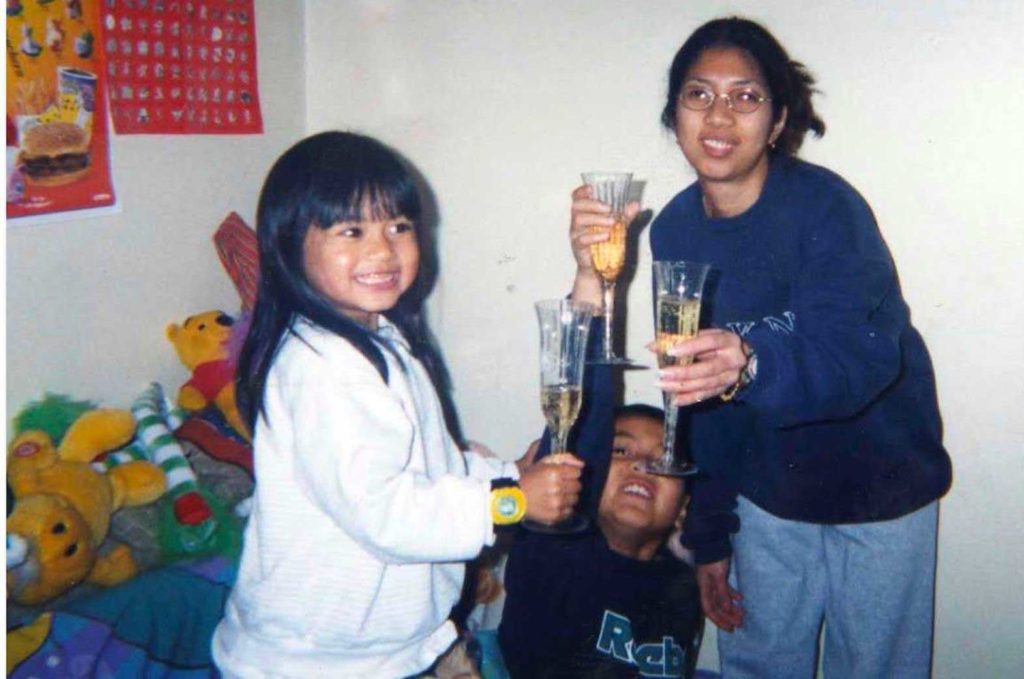 SAN FRANCISCO – Twenty years ago this month, Claire Joyce Tempongko was tortured and murdered in front of her two young children by her ex-boyfriend.  The single mother had called 911 at least 5 times, whenever the man with whom she had an off-again, on-again relationship unleashed his violence on her.

By October 22, 2000, Claire Joyce had resolved to move on.  She told her former intimate partner that she wanted him gone, for good.  She took her son and daughter out for a fun day together and looked forward to a peaceful evening at home.  Instead they were confronted at their door by Claire Joyce’s ex, who demanded that she take him back.  When she refused, he began to yell at her, beat her up, and stabbed her multiple times until she lay bloodied, fatally wounded.

A special task force convened by the Mayor of San Francisco to review the case found authorities liable for the negligence that had freed the assailant even though he dropped out of a court-ordered domestic violence counseling and violated a standing restraining order.  Many years passed before the killer was apprehended in his home country, arrested, tried, convicted and sentenced to prison.

Through the tragedy, Claire Joyce’s family — her mother Clara, children Justin and Janine, sister Julia and brothers Michael and Leo — have shared their story every October, Domestic Violence Awareness Month, to prevent other families from suffering the same fate.

“Like many in abusive relationships, Claire Joyce believed she could change her partner,  that’s why she took him back when he apologized and promised never to hurt her again.  But he kept breaking that promise.  When he realized he could not enter my daughter’s life again, he decided to take her life,” Clara Tempongko recalls that autumn night as if it happened yesterday, pointing to what gave her courage in her despair.  “We are grateful to the community for supporting my family in our grief and search for justice.  Together we will continue working with organizations to stop domestic violence.”

In the name of Claire Joyce, the Tempongkos have headlined milestone presentations of ALLICE Alliance for Community Empowerment, the Filipino American-initiated abuse prevention nonprofit formed to educate about the dynamics of abuse as a primary form of prevention.

“Ours is a movement of caring, empathetic and woke individuals who go out to their individual and collective orbits to impart facts about the dynamics of abuse: that it is a learned behavior, a pattern where one partner takes power and control over the other that worsens over time,” says Cherie Querol Moreno, a state- certified domestic violence counselor who founded ALLICE in 2003 after attending a candlelight vigil for Claire Joyce attended by a handful FilAms. 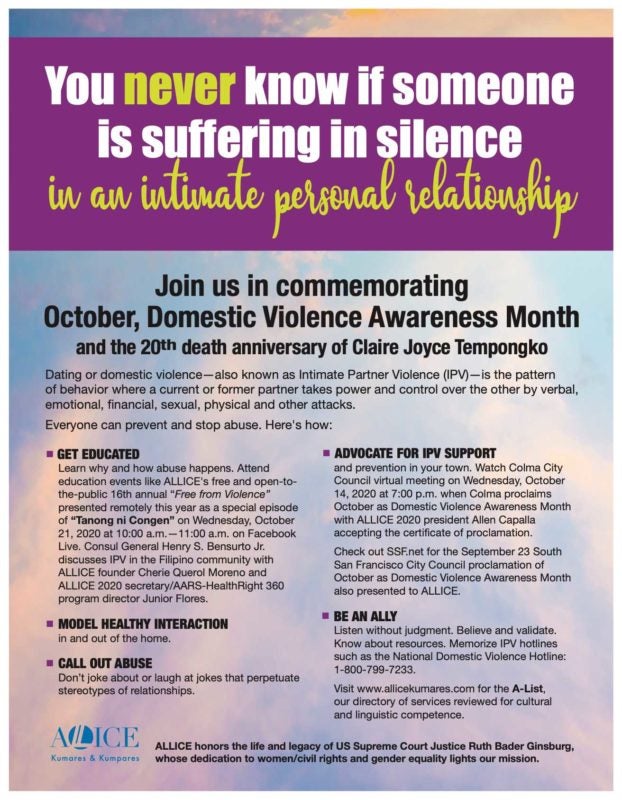 She says further: “Anyone can fall into an abusive relationship if they do not recognize the signs for abusive behavior or believe abuse happens only to certain people, which is one of the many myths we try to debunk at our presentations.”

Held annually since 2004, Free from Violence is a free and open to the public seminar and resource provider fair.  A life-size photo of a happy Claire Joyce, Janine and Justin toasting the first day of 2000 welcomes attendees at center stage of a venue typically offered by an entity that concurs with the philosophy that the community is its residents’ responsibility.  A video of intimate partner and family violence survivors starts the program.  Public officials  and family health advocates issue a call to action against the problem that affects not only the parties involved but also the people around them, including strangers.

A high point of each event is the testimony of a survivor, who details the constant criticism, isolation and humiliation that often escalate to pushing, slapping and grave threats till she fears for her and her loved one’s lives.  Each event concludes with the Pledge to Help End Domestic Violence composed by ALLICE.

Partner organizations share resources to help stage each presentation.  Last year, Free from Violence took place at the City Council chambers of Daly City, the first time a municipality offered its most sacred space to declare its stand against dating and domestic violence.

This year, the Philippine Consulate in San Francisco,  ALLICE founding partner that hosted the first-ever Free from Violence at its Social Hall in 2004, stepped in once again to ensure that the annual fall tradition occurs despite the Covid 19 pandemic.

The event will be held remotely on “Tanong ni Congen” (or “Congen Inquires”), an online program hosted by Consul General Henry S. Bensurto, Jr. launched in the early days of the worldwide health crisis to keep connected with the community during the state-mandated shelter-in-place order.

The special episode is dedicated to the memory of Claire Joyce Tempongko and how her fate turned her family’s grief to advocacy.

“We are happy to make use of our Consulate’s online platform to discuss with and present, in cooperation with ALLICE, a crucial, life-saving topic as Intimate Partner Violence, to the community,” says “Congen,” the term of respectful endearment for the highest ranking representative of the Philippine government in the US Northwest and vicinity. “At this time of the pandemic, it is very important for people not to feel alone and for them to know that they have people and organizations, such as ALLICE, to turn to, in case of need.”

Since its debut program in May, “Tanong ni Congen” (TnC) has been viewed and liked weekly by over 5,000 netizens interested in Filipino concerns around the world.

The brainchild of the consulate officers and staff goes live on the Consulate’s official Facebook page http://www.facebook.com/PHinSF/ every Wednesday at 10 am Pacific Standard Time.  Half of the time the show focuses on consular matters and half addresses a specific topic with pertinent resource persons as guests, but TnC  is dedicating a full hour of the Oct. 21 special episode to the discussion of intimate partner violence  as ALLICE’s 16th annual Free from Violence.

Bensurto Jr. will explore the subject of dating and domestic violence with Querol Moreno and ALLICE 2020 secretary Anastacio “Junior” Flores.

Flores, program director of Asian American Recovery Services – HealthRight 360, decided to join the organization after first participating as a resource provider and sponsor. 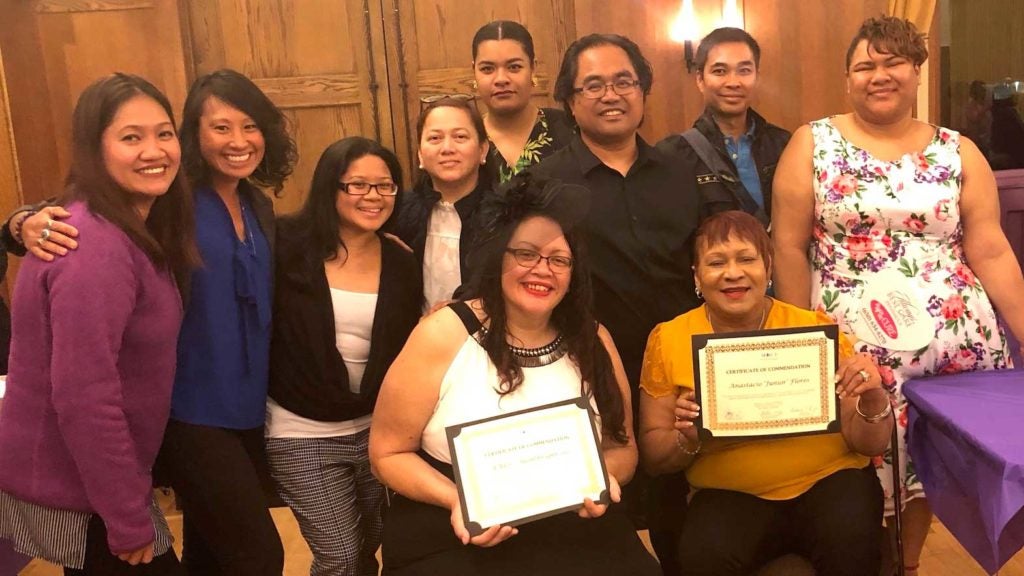 “In the past 4 years I’ve been on board, I’ve learned more tools to help people facing challenges and become their better selves,” says Flores, a certified substance abuse counselor.  “Intimate partner and family abuse are extremely complex.  As Kumares and Kumpares we have consistent trainings by our member therapists that deepen our understanding of the issues involved.  We acquire a level of awareness that enhances our interaction whether at home or at work.”

ALLICE founding president Bettina Santos Yap, who spoke at a June episode of Tanong ni Congen on the uptick in child and domestic violence cases under the state shelter-in-place mandate, elaborates on the longtime partnership with the consulate.

“The consulate is a major resource particularly for newly arrived Filipinos.  Our collaboration facilitates service to Philippine nationals seeking assistance in troubled relationships.  Together we provide culturally sensitive first response to survivors and their loved ones until they request referral to direct service providers.  We also provide training for consular staff to help them respond to disclosures of being in troubled homes,” she explained.  “We value our partnership and thank the Consul General for recognizing the importance of education as primary prevention.”