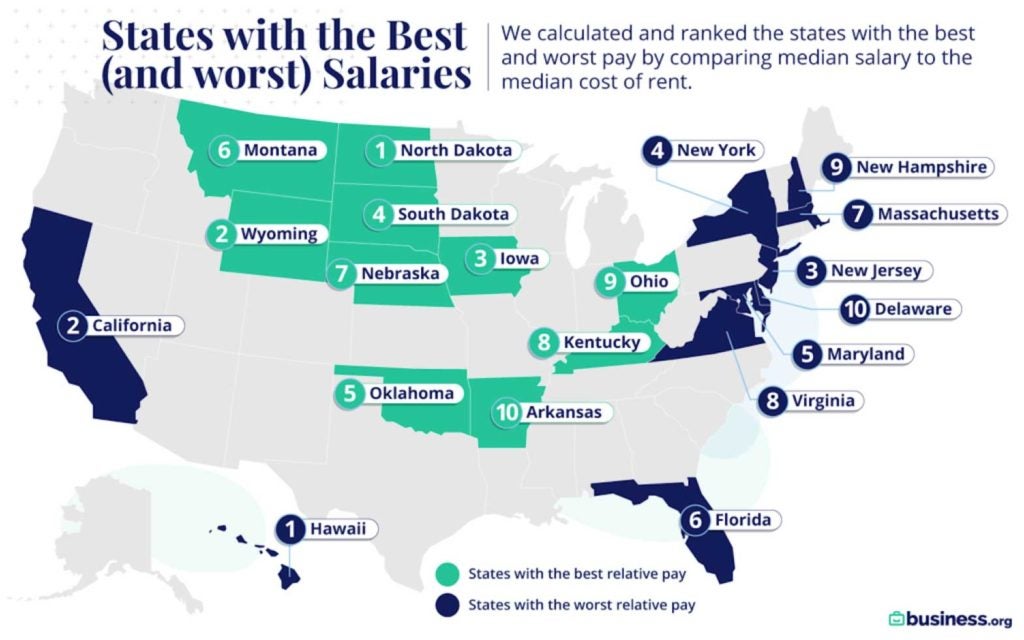 To make a good living, it isn’t just the amount you make that matters. It’s also where in the United States you make that money. Sure, California’s median salary is higher than Wyoming’s, but Californians have to work around 68 hours to afford one month’s rent on a one-bedroom apartment. Meanwhile, Wyomingans work 30 hours to afford rent, which means they have 38 more work hours than Californians to spend (or save) on something other than housing.

In the midst of this pandemic, making sure your salary goes as far as possible matters more than ever. Now isn’t exactly the greatest time to pull up stakes and move from one of the best states to get paid to one of the worst. Curious to know where your state falls in the ranking? Check out Business.org results below. https://www.business.org

For this year’s state rankings, Business.org looked at each state’s median hourly wage as recorded by the Bureau of Labor Statistics. It then used info on apartmentlist.com to determine the median cost of a one-bedroom apartment in each state.

After calculating how many hours you’d need to work at the median salary to make the median rent, the states (plus the District of Columbia) were ranked in order of working hours required for rent. Both data points come from May 2019, making the data blissfully pre-COVID. Seeing how COVID impacts these numbers in next year’s report would be interesting.

Besides pinpointing the best and worst states, there are a few other interesting facts:

Top 10 states with the best pay

Bottom 10 states with the worst pay

It’s great to bring home a nice check at the end of the day, but especially these days, it’s even better to have as much leftover cash as possible after paying rent. Before setting your sights on the highest-paying job in your field, take a look at where you’re living: a lower salary in the right state might prove more valuable overall.