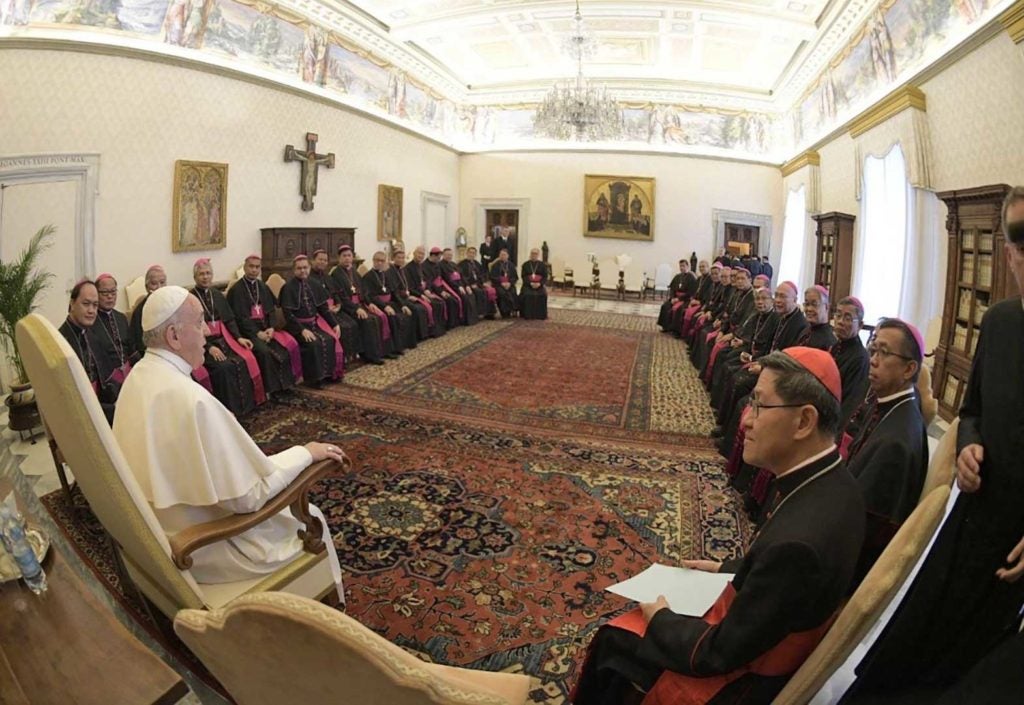 Pope Francis meets Filipino bishops from Luzon for their ad limina visit in May 2019. CBCPNEWS.NET

The Metropolitan See of Manila has been sede vacante since Cardinal Tagle was appointed Prefect of the Congregation for the Evangelization of Peoples in Rome and the Catholic world keeps on asking: “Who will be the next Archbishop of Manila?”

The first and the last Spanish Bishops of Manila were Dominicans. Domingo de Salazar was the first, installed in 1581, and Bernardino Nozaleda was the last, installed in 1890, and resigned in 1902. Bishop Salazar was the first pioneering prelate made in charge of the entire Philippine islands, when Leonardo da Vinci’ airplane design was still in the drawing board, when the existence of places outside of Europe was a plain gossip, and when all straights, seas, and strange lands had no maps.

Historians remember Nozaleda as the Archbishop of Manila when Rizal returned in 1892 from Spain, deported to Dapitan, imprisoned in Fort Santiago, and executed in 1896. He is also remembered as the Archbishop who excommunicated Aglipay in 1899 and the highest Church leader during the problematic transition of colonial powers from Spain to the United States.

One month before his death, on June 10, 1903, Pope Leo XIII chose Jeremiah J. Harty to replace Archbishop Nozaleda of MANILA, Frederick Rooker to replace Bishop Andres Ferrero of JARO, Thomas A. Hendrick to replace Bishop Martin Alcocer of CEBU, and Dennis Dougherty to replace Bishop Campomanes of NUEVA SEGOVIA. They were the first four American prelates to take over the dioceses governed by the last Spanish resident bishops.

Jeremiah J. Harty was parish priest of St. Leo Parish in Missouri until his designation as the 26th Archbishop of Manila in 1903. The first Filipino bishop was Bicolano Jorge Imperial Barlin, who was designated Bishop of Nueva Caceres and consecrated only in 1906. My question is, why would the Holy See pluck from the United States  an ordinary parish priest 13,000 km away and appoint as Archbishop (with a pallium) of the most important Metropolitan See in Asia-Pacific?

The appointment of an American priest over an equally qualified Filipino priest: Was it because the near-effortless “mock and phony” victory of the Americans against the Spanish armada in Manila Bay in May 1898 signaled the beginning of 40-year-plus American colonial administration in the Philippines? And an American prelate was more favorable in the diplomatic sense to the new colonial masters than a Filipino prelate?

Or was it more than diplomacy? By the turn of the century, the native secular clergy were made to choose between the patriotic cause of the new Filipino Independent Church or Aglipayanism and loyalty to the Pope. Confusion ruled the dioceses across the nation, just as the seminaries and Catholic schools were left lethargic, and parishes left without a point-person.

The abolition of the Patronato Real had caused more financial and logistics problems, as hospitals, schools, and parishes once administered jointly by the Spanish government and the Church were claimed by the Aglipayan clergy. The strong anti-friar sentiments divided the Catholic faithful, while the American Thomasites and Protestant ministers were aggressively proselytizing them and more big troubles and real problems, like tidal waves, continued to wreak havoc on the Boat of Peter in the Philippines.

Knowing beforehand that his assignment job in Manila got paid in migraines and headaches, added to the fact that he was disadvantaged by his ignorance of the Filipino and Spanish languages, the new Archbishop nonetheless accepted the job in obedience.

As the Philippine Church celebrates the 500th anniversary of the arrival of Christianity in the country in 2021, the incoming Archbishop of Manila should be able to fill up the big shoes of Cardinal Tagle in his own way. With Archbishop Oscar Cruz gone, he must be outspoken enough to become a conscientious voice in the last two years of the Duterte administration and provide solid Catholic teachings to the faithful in choosing the next national leaders in 2022.

When many parishes and Catholic schools go broke due to pandemic, when joblessness and hunger make more Filipinos depressed and hopeless, when the drug war drags and political polarization tears our Catholic nation apart, when the big picture gets clearer but uglier, suffice it to say that the incoming archbishop needs the miraculous grace of God and a lot of helping hands from you and me.