California to ban sale of gas-fueled vehicles in 15 years 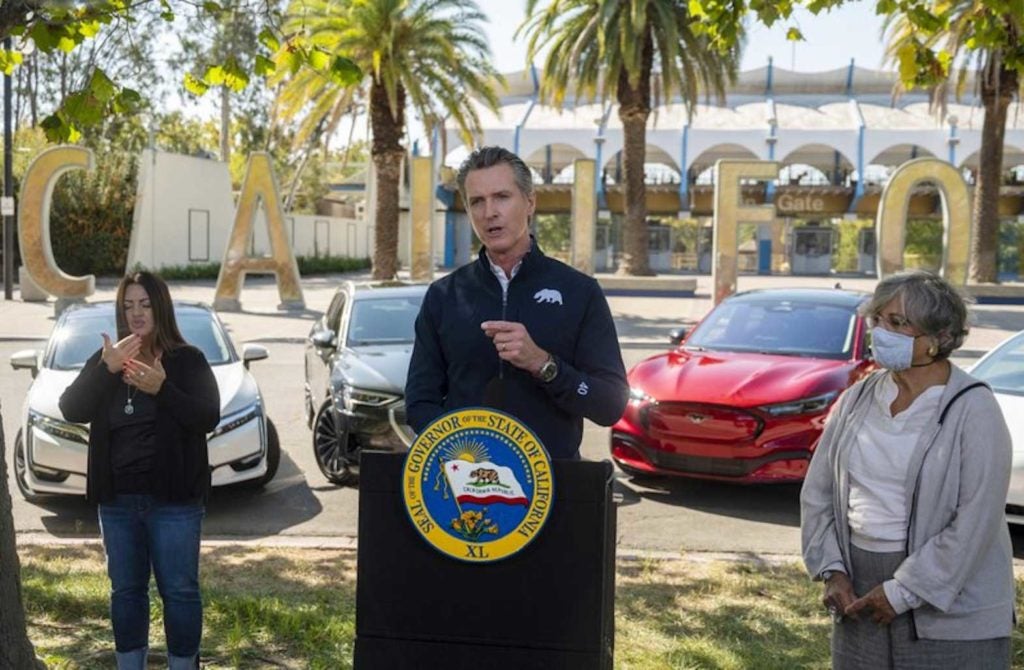 California Gov. Gavin Newsom speaks at a press conference on Wednesday, Sept. 23, 2020, at Cal Expo in Sacramento where he announced an executive order requiring the sale of all new passenger vehicles to be zero-emission by 2035, a move the governor says would achieve a significant reduction in greenhouse gas emissions. California would be the first state with such a rule, though Germany and France are among 15 other countries that have a similar requirement. (Daniel Kim/The Sacramento Bee via AP, Pool)

SACRAMENTO, California — California will ban the sale of new gasoline-powered passenger cars and trucks in 15 years, Gov. Gavin Newsom announced Wednesday, establishing a timeline in the nation’s most populous state that could force U.S. automakers to shift their zero-emission efforts into overdrive.

The plan won’t stop people from owning gas-powered cars or selling them on the used car market. But in 2035 it would end the sale of all new such vehicles in the state of nearly 40 million people that accounts for more than one out of every 10 new cars sold in the U.S.

California would be the first state with such a mandate while at least 15 other countries have already made similar commitments, including Germany, France and Norway.

Newsom used the hood of a red, electric-powered Ford Mustang Mach-E to sign an executive order directing state regulators to develop new regulations to meet the deadline. He urged Californians to “pull away from the gas pumps” and encouraged other states to join California for the good of the environment and public health.

While environmental groups cheered the announcement, the oil industry panned it and the automakers’ industry group sought a middle ground, saying it’s committed to increasing zero-emission vehicles but through cooperation among governments and businesses, not by mandates.

Tailpipe exhaust from cars, pickups, tractor-trailer rigs and other transportation are the single largest source of air pollution, and California has by far the most cars on the road than any other state.

In 2017, the federal government said California emitted 266.5 million tons (241.8 million metric tons) of carbon dioxide from the burning of petroleum. That’s about the same as the total emissions from Egypt, which has 2.5 times the population.

Newsom says his order will reduce greenhouse gas emissions by 35%. But he stressed the benefits went beyond the environment, saying electric cars and trucks are “the next big global industry and California wants to dominate it.”

Some auto industry analysts warned the timeline could be too fast for technology to catch up to customer’s expectations. Battery life and manufacturing costs are still issues that haven’t been resolved, said IHS Markit principal analyst Stephanie Brinley, who studies the North and South American auto markets.

On Tuesday, Tesla announced plans for cheaper batteries with higher energy density, but they are well into the future, she said.

“Even if you get a battery like Tesla is talking about, it’s going to take time and money to get there,” Brinley said.

Jessica Caldwell, executive director of insights at the Edmunds.com auto pricing site, said Newsom’s announcement “does seem like this is a significant shot fired against” the internal combustion engine that is likely to trigger high-level meetings at all the auto companies, which were moving toward electric vehicles but didn’t expect a zero-emissions mandate in 15 years.

Ford Motor Company said it agreed with Newsom that it’s time to take action to address climate change. But the Alliance for Automotive Innovation, which represents Ford and most other automakers, said markets can’t be built with mandates and bans.

The oil and gas industry, meanwhile, criticized Newsom for holding a news conference on Wednesday in front of nearly $200,000 worth of electric cars “as he told Californians that their reliable and affordable cars and trucks would soon be unwelcome in our state.”

“Big and bold ideas are only better if they are affordable for us all,” said Cathy Reheis-Boyd, president of the Western States Petroleum Association. “Our industry and the energy we provide will be the part of any solution.”

Mary Nichols, chairwoman of the California Air Resources board tasked with writing regulations for the plan, said electric vehicles will be more affordable in 15 years and everyone will benefit from cleaner air.

California already has some of the most progressive climate laws in the country, putting it at odds with the Trump administration and it’s more relaxed regulatory approach to environmental policy. The federal government has tried to end California’s authority to set emission standards for cars and trucks, a move the state is fighting in court.

About a dozen states follow California’s lead on auto emissions standards that are more restrictive than federal rules. If those states follow suit on zero-emission vehicles, it could have a huge impact on the U.S. automobile industry.

Governors from many of those states appeared with Newsom at an event on Wednesday sponsored by the U.S. Climate Alliance. They praised California’s move, but they gave no immediate indication they would join it.

Newsom’s order on Wednesday also targeted medium and heavy duty commercial trucks, saying he wants those to be 100% zero-emission vehicles by 2045 “where feasible.”

On the oil production side, Newsom called on the state Legislature to end new fracking licenses by 2024. Fracking is a technique that allows energy companies to extract huge volumes of oil and gas from shale rock deep underground. It involves injecting high-pressure mixtures of water, sand or gravel and chemicals into rock. Fracking opponents says the chemicals involved threaten water supplies and public health.

“Newsom can’t claim climate leadership while handing out permits to oil companies to drill and frack,” said Kassie Siegel, director of the Center for Biological Diversity’s Climate Law Institute. “He has the power to protect Californians from oil industry pollution, and he needs to use it, not pass the buck.”