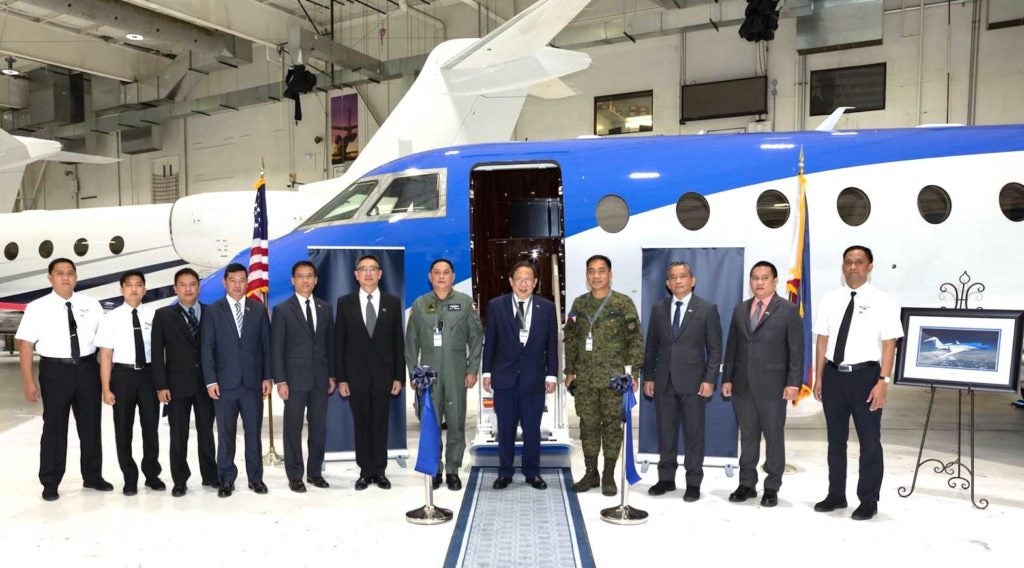 Philippine Embassy Deputy Chief of Mission Renato Pedro Villa (5th from left), Defense and Armed Forces Attaché B/Gen. Marlo Guloy (4th from left) and officials of the Philippine and U.S. Air Forces during the turnover ceremony of the Gulfstream G280 to the Philippine Government on Sept. 17, 2020 at Gulfstream Aerospace Dallas Facility. CONTRIBUTED

The G280 aircraft is part of the aircraft acquisition project under the Revised Armed Forces of the Philippines (AFP) Modernization Program. It will replace the aging aircraft used by the President and other senior officials of the Philippine government in cases of emergency.

“The acquisition of the G280 aircraft is an important component of our efforts to modernize the AFP, representing a priority deliverable for a superior, multi-role aircraft. The G280 will provide our country’s leadership with fast and reliable domestic and regional air transportation, with the Command and Control capabilities that can facilitate immediate executive decisions wherever in the country or region the aircraft may be, most especially during times of calamity or conflict,” said Renato Pedro Villa, Deputy Chief of Mission of the Philippine Embassy in the United States. Villa spoke at the turnover ceremony on behalf of Philippine Ambassador Jose Manuel Romualdez.

The PAF purchased the G280 under the foreign military sales program of the U.S. government. The aircraft is capable of command and control functions, such as extensive and secure communications and monitoring systems. During the turnover ceremony, Gulfstream Aerospace Corporation’s Vice President Naveed Aziz remarked, “The aircraft represents the first G280 to serve as command and control airplane for a government.”

On Sept. 21, 2020, the PAF commissioned the G280 in a ceremony at Clark Air Base in Mabalacat City, Pampanga, Philippines. The aircraft’s inaugural flight involved ferrying high level officials of the COVID Interagency Task Force (IATF) on a pandemic-related assessment trip.