Ruth Bader Ginsburg was there for us 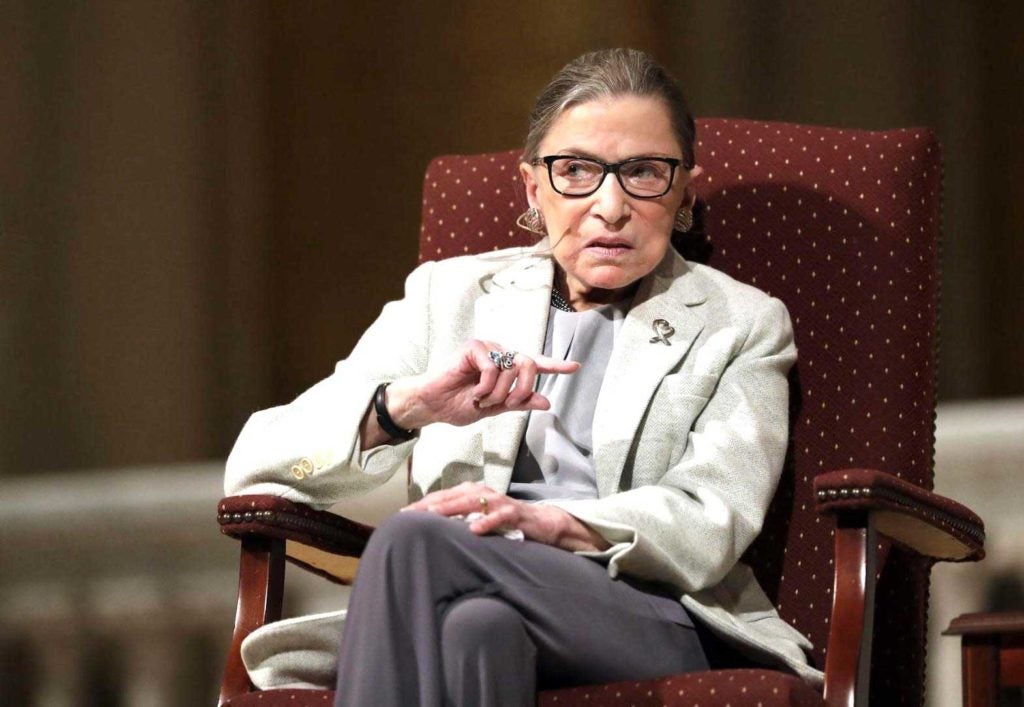 For anyone concerned with justice and equality in society, we were lucky she was the doorstop when others tried to shut us all out.

The woman born 87 years ago in Brooklyn, New York was nicknamed “Kiki” as a child because as a baby she was kicky. In her life, she sure kicked open doors, and kicked down barriers for women, minorities, for anyone on the fringe. She was our guardian kicker.

Ginsburg was from the Flatbush section of Brooklyn, which also happens to be the birthplace of two of my most significant influences in my life. They were all Jewish, who knew of life’s hardships, historical and present.  And they were all rebels, with a fighting spirit to right all wrongs as they yearned for justice.

For Ginsburg, the issue was the sexism she felt after graduating from the top of her class at Columbia University. Her gender prevented her from getting a job as a legal clerk for a Supreme Court justice.

I don’t expect another liberal to assure a more balanced court. Why would anyone want the best for our country? And the hypocrisy will be clear as Republican senators already are contradicting what they said in 2016 about not forcing a replacement in future election years.

Ginsburg’s desire was to have the newly installed president appoint her replacement after the election.  That could be either Trump or Biden, but in that way, Ginsburg was saying the people, the voters, should decide.

If we honor Ginsburg’s wishes, where do we stand on the election?

Hard to rely on the polls. For Asian Americans, polls are a vast wasteland where we don’t exist. Mainstream exit polls that dare mention Asian Americans are unreliable. Which is why my favorite of all polls are the AALDEF exit polls (coming up in November), in-language, on the spot talking to real people about what they just did behind the curtain.

That means a respondent’s answer is either penance or a lie, especially if they voted for Trump or Biden and don’t want to admit it. But you get a response right after the act.

Polls done before the election have different problems. People change their minds. And it’s just an early snapshot in time that could change. Still, look at any mainstream poll and again, few bother to show, find, or care about Asian Americans.

That’s why it’s always worth looking at the Asian American Voter Survey. The 2020 Asian American Voter Survey (AAVS), with a margin of sampling error of plus/minus 2%, includes six major Asian ethnicities–not bad when most polls render us statistically absent. (For you stats geeks, the survey was taken in several Asian languages between July 2020 and September 2020, reaching 1,569 registered Asian American voters by phone and online, more than 600 of whom live in California. A three-month spread is a lot of time. Does it take in Trump’s taped confessions to Woodward? The rising COVID death toll approaching 200,000?

And now we have Ginsburg’s death.

So the AAVS is an imperfect political mirror, but you can make yourself out without squinting if you want to know what Asians think. And if you want to know how Chinese, Filipinos, Indians, Vietnamese, Koreans, and Japanese differ on issues well, you can do that too.

One big takeaway this election year is we’re all very motivated.

Filipinos (62 percent) and Asian Indians (58 percent) are the most enthusiastic, with the same two groups at the top of the list saying they’re voting by mail and in person. Oddly, Chinese lead the “least enthusiastic” list. That could be because of language barriers or Trump’s China-bashing. Or maybe it’s just outreach. The survey indicates that only 44 percent of Asian Americans say they’ve been contacted by Democrats. 40 percent say the Republicans have come calling. That’s a huge number of registered voters who are just ignored.

That’s worse than being invisible. The politicos see us and just say, “pass.”

Janelle Wong of AAPI Data called it “a gap between our enthusiasm and the interest that Asian Americans have in voting.” What will close the gap and help them see us? Contributions comes to mind. It’s one reason Asian Indian interest the last few election cycles has shot up. No doubt VP candidate Kamala Harris will have an effect this year, but much of the survey was done before Biden named Harris as his running mate in August.

The AAVS did find Joe Biden leading Donald Trump, 54 percent to 30 percent among all Asian Americans, but there’s still some persuasion possible. The undecided vote is as high as 23 percent among Chinese Americans.

The Trumpiest Asian Americans are the Vietnamese, who beat out the Filipino Trumpsters 46 percent to 34 percent in their love of Trump. But asked if one had a favorable or unfavorable opinion of Trump, even the Vietnamese waver a bit with 51 percent having some degree of “favorable” opinion, and 38 percent “unfavorable.”

That’s a lot of duds in Trump’s firecracker pack.

I’ll do more about AAVS and also AALDEF’s multilingual exit poll in future columns, but the top issues in 2020 seem to be the economy, health care, and race discrimination. And while much has been made of coronavirus-related anti-Asian violence, there’s also concern about health, unemployment, and financial well-being.

The 2020 AAVS also found that Asian Americans are overwhelmingly affirmative action supporters, with 70 percent in favor, and only 16 percent opposed, with 14 percent “don’t know.” Keep that in mind when you consider the legal fight over race-conscious admissions at Harvard, in which Asian Americans are being used as white proxies.

Time for another round of “Can White Conservative Males Use Asian Americans to End Affirmative Action Policies at Harvard?” So far, the answer is no.

After a federal district court ruled last October that Harvard did not intentionally discriminate against Asian Americans, the plaintiff, Students for Fair Admissions–a group led by a white conservative zealot Edward Blum–took the next step to the 1st Circuit Court of Appeals this week. Oral arguments were heard Wednesday, but Blum has indicated the group is willing to fight all the way to the Supreme Court. He’s been there before fighting affirmative action and lost twice, but will Asian Americans be Blum’s lucky charm? It should be a ticket for Blum’s third strike.

Representing Blum and SFFA on appeal was William Consovoy, a personal lawyer for Donald Trump. Consovoy argued Harvard’s admissions process is subject to bias because it relies on a “personal rating” that Harvard uses to grade applicants on things like courage and integrity. The argument is that this could lead to stereotypical assumptions. Asian Americans generally have lower scores in this category and could be hurt by such a metric. But no applicants or witnesses were presented at trial in the lower court to make that point.

Here’s a shortcut to understanding how weak the SFFA’s case really is. Just look at the results of Harvard’s Asian American admits. The last three freshman classes have seen a steady rise. The latest class of 2024 is 24.5 percent Asian. Discrimination? Sounds like Harvard is letting in a lot of Asian Americans.

In my day, the typical Asian American student was from a rich elite family. (Benazir Bhutto was in my era.) Now it’s a middle class Asian American who is often on scholarship.

Harvard may not be perfect, but its use of race in admissions is just one factor in a complicated but legal process that Blum and his ilk seem committed to fighting in perpetuity.

Jennifer Laude, a/k/a Maganda (her nickname, which means “beautiful” in Tagalog) was the Filipina trans woman viciously killed by Marine Corporal Joseph Scott Pemberton in the Philippines. It was a sensationalistic murder after a nightclub pickup and a different kind of gender reveal. Pemberton was convicted, but recently Philippines President Rodrigo Duterte surprisingly pardoned Pemberton, who served six years in an isolated cell, and not in a Filipino prison. After the initial outcry from Filipino LGBTQ activists, Pemberton was deported to the U.S. last week.

Will the activism now continue in the U.S.? Pemberton could face a court-martial here. Shouldn’t he also face the public’s disdain? LGBTQ and human rights advocates have an opportunity to shine a light on all the relevant issues. The Philippines is clearly trying to curry favor with the U.S., as Duterte is still saddled with the multitude of human rights violations involving extra-judicial killings in the country’s war on drugs. But the thought of a convicted U.S. Marine pardoned for the vicious murder of a trans woman on top of that? Why does America’s first colony continue to bow to its one-time tormentor? Just thinking about the murder of Jennifer Laude should be enough to anger anyone into calling for Justice for Maganda.

EMIL GUILLERMO is a journalist and commentator. He writes a column for the North American Bureau of Inquirer.net. Twitter @emilamok. Listen to his podcasts on www.amok.com