Majority in U.S. plan to vote before Election Day — poll 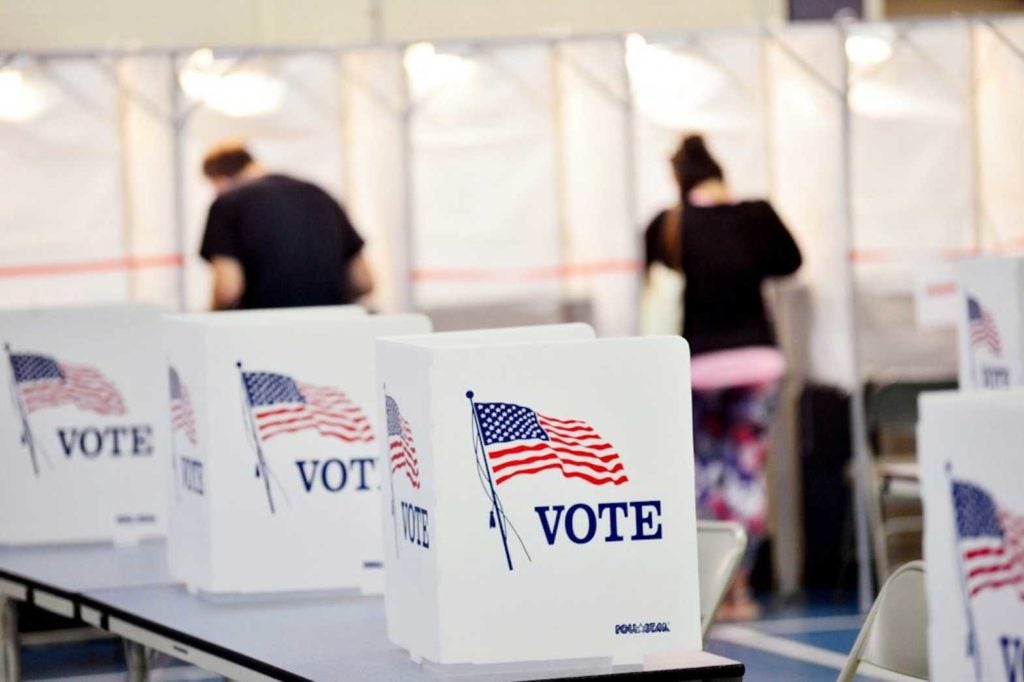 In In this Sept. 8, 2020 photo, voting booths are kept socially distant at the Chesterfield, N.H. polling site. A majority of President Donald Trump’s supporters plan to cast their ballot on Election Day, while about half of Joe Biden’s backers plan to vote by mail. That’s according to a new poll from The Associated Press-NORC Center for Public Affairs Research that finds 54% of voters say they will vote before polls open on Nov. 3. (Kristopher Radder/The Brattleboro Reformer via AP)

DENVER  — A majority of President Donald Trump’s supporters plan to cast their ballot on Election Day, while about half of Joe Biden’s backers plan to vote by mail, a sign of a growing partisan divide over how best to conduct elections in the United States.

Overall, 39% of registered voters say they will vote by mail, well above the 21% who say they normally do so, according to a new poll from The Associated Press-NORC Center for Public Affairs Research. The rise is skewed toward backers of the former vice president, 53% of whom plan to vote by mail. Fifty-seven percent of Trump’s supporters say they’ll vote in person on Nov. 3.

Fifty-four percent of voters say they will vote before polls open on Election Day. In 2016, roughly 42% of voters did so.

Trump for months has denigrated mail voting, and Democrats have expressed concern about postal delays that could keep such ballots from being counted. The poll finds ebbing enthusiasm for mail voting: Only 28% of Americans say they would favor their state holding elections exclusively by mail, down from the 40% who said so in April as the coronavirus pandemic was first spreading in the U.S. and before Trump launched his anti-mail campaign.

Support for states allowing voters to cast an absentee ballot without requiring a reason is higher, but also down since April, from 56% to 47%.

Sherry Santiago, 55, of Palm Bay, Florida, is disabled and cannot drive. The Democrat said she almost lost her chance to vote in 2016 because she couldn’t get a lift to the polling place and she’s happy to sign up for a mail-in ballot this year.

“I don’t want to take a chance of missing it,” Santiago said of the election. “I have total confidence in voting by mail. I don’t worry there will be a problem.”

But Michelle Harman, 44, a Republican who works in the oil and gas industry in Artesia, New Mexico, plans to vote in person on Election Day.

“This year more than any other, there’s a lot of gray area about what could happen to your vote,” said Harman, who said she didn’t question voting by mail in 2016 when she was out of town.

Traditionally, voting by mail has not been a partisan issue. Until recently, Republicans were more likely to do so than Democrats, because older voters have tended to vote by mail more often than younger voters. 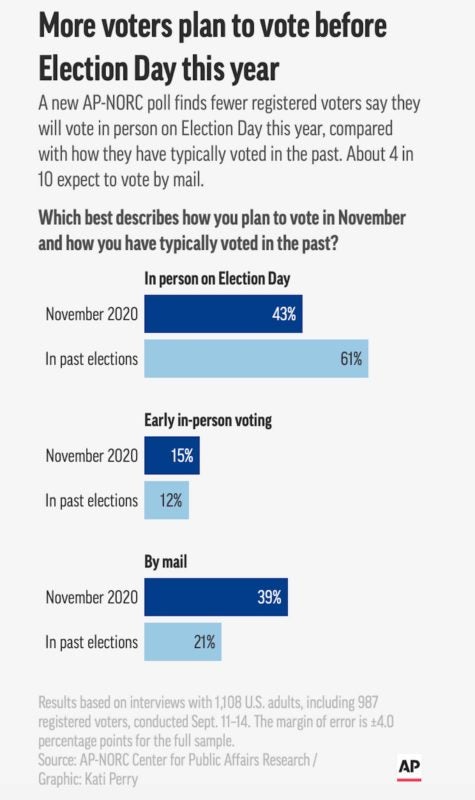 The Centers for Disease Control and Prevention recommended earlier this year voting by mail as an alternative to face-to-face interactions at polling places, which could pose a risk of coronavirus infection. States have scrambled to adjust to an expected surge in advance voting, with nearly three dozen changing their mail or absentee voting rules in response to the pandemic.

The president has since tried to fan skepticism of mail voting, baselessly claiming that its widespread use will lead to fraud. Trump warned that mail voting could lead to so many people voting that “you’d never have a Republican elected in this country again.” He condemned on Thursday the plan in 10 states to proactively send mail-in ballots to registered voters, claiming without evidence it means the result of November’s election would never be accurately determined.

Studies of past elections have shown voter fraud to be exceedingly rare. In the five states that regularly send ballots to all voters, there have been no major cases of fraud or difficulty counting the votes.

In swing states like Florida, North Carolina and Pennsylvania, Democrats have far outpaced Republicans in requesting mail-in ballots so far this year.

John Mohr, 58, who works at a Dollar General store in Wilmington, North Carolina, asked for a mail-in ballot, but he plans to drop it off at his local elections office. He’s seen videos on Facebook saying — falsely — that mail-in ballots are labeled by party, tipping off postal workers who could throw them out before they reach the elections office.

“I don’t trust the postal service and I sure don’t trust Democrats,” Mohr said. Trump in North Carolina this month called for his supporters to vote twice — once by mail and once on Election Day — to ensure their vote is counted, which would be illegal. The president now urges supporters voting by mail to check at their polling place whether their ballot was received, but Mohr said he doesn’t want to deal with social distancing rules.

“I don’t want to stand there with 50 different rules,” Mohr said.

The poll shows only 34% of Americans have great confidence in the U.S. Postal Service, following a summer of controversy over slowed service resulting from cuts made by Trump’s appointee. Still, 49% say they have some confidence.

Democrats suspect the cuts are an effort to sabotage mail voting, and Trump himself said he’d be happy if the post office got less money to stop Democratic efforts to expand that method of voting.

Robert Schott, a Republican, plans to vote in person because his polling place is 500 yards from his home in Cranford, New Jersey, and is rarely crowded. “It’s easier than going to the post office,” said Schott, 62.

Schott, who dislikes Trump and does not know who he will vote for, spoke as he looked at the ballot that just arrived by mail. Though Trump has criticized that practice, Schott sees nothing wrong with it. Nor does he distrust the postal service.

“If they can’t handle 50 million ballots but they can handle 2 billion Christmas cards, c’mon,” Schott said.

Christopher Roquemore, 47, a Democrat in Montgomery, Alabama, will vote early in person because he’s volunteering as a poll worker on Election Day. “I figure as long as I wear a mask and I wash my hands and do everything I’m supposed to do, it’ll be as safe as going into a grocery store,” he said.

But his parents, who live across the street, will be voting by mail.

The AP-NORC poll of 1,108 adults was conducted Sept. 11-14 using a sample drawn from NORC’s probability-based AmeriSpeak Panel, which is designed to be representative of the U.S. population. The margin of sampling error for all respondents is plus or minus 4.0 percentage points.